Anna arrived a few days before her sisters, and we were all together for my birthday. 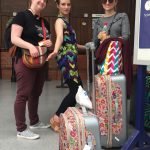 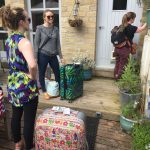 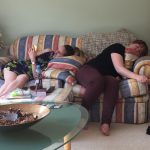 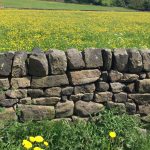 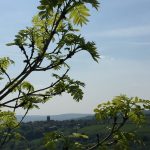 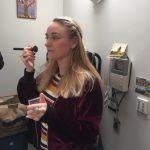 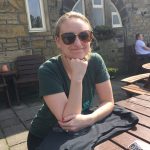 We took a lovely walk along the tops from Pecket Well to Mytholmroyd and then back along the Rochdale canal.

The girls brought me lots of family photos that I’d not had room for in my boxes when I moved to England. We had fun in Stubbings Wharf looking at the old photos.

Shopping featured high on their ‘to do’ list. We went to explore Blackburn market one morning. 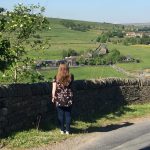 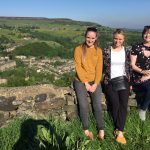 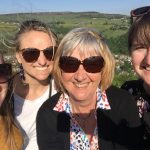 Another day we drove along the tops and enjoyed the views of Hebden Bridge  from Heptonstall. 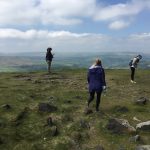 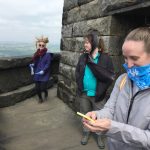 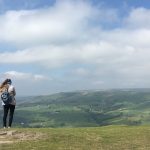 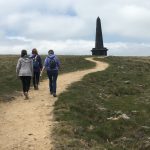 We climbed up to Stoodley Pike from my apartment. It was very windy at the top.

For my birthday treat we went to see Sarah Millican’s stand up comedy show at the Victoria Theatre in Halifax, stopping in at the Square Chapel for a bite to eat before the performance. 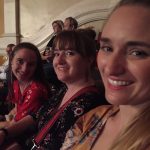 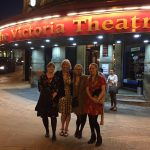 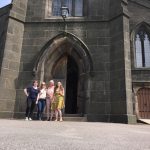 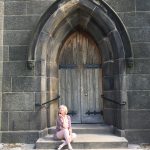 On my  birthday we’d come up with a plan to go to Turton and Affetside. I was married at Turton church and so were my parents. We presumed it would be locked so you can imagine our excitement when we saw that the door was open and a few cars were in the drive. As we approached I could hear a choir singing ‘Eternal father strong to save’ which is usually sung ‘for those in peril on the sea.’ I though perhaps there was a funeral

in progress, so we quietened down, and found ourselves in a crowded room at the back of the church, set up with tables and chairs amply garnished with tea and scones. At that moment the whole room erupted in the singing of Happy Birthday. I couldn’t believe it! The girls and I all burst into tears. We were looked at by the assembled mass as if we’d come from another planet! It soon became apparent that it was someone else’s birthday – and the tea party was a fund raiser for the National Lifeboat Institute! As soon as I explained our presence one of the churchwardens took it upon himself to show us

round. I was invited to play the organ. The girls were coerced into singing along to All Things Bright and Beautiful, and then the marriage register was brought out from the vestry and I could actually touch my signature that I wrote on August 26th, 1978.

Outside St Anne’s, Turton. I recently used the grotesque in my new quilt. I often create a quilt at a major change in my life and my move to Hebden Bridge last autumn was no exception.

Next stop was Affetside, the tiny village, no more than a hamlet really, where I was born and lived until I went to college.

My mum walking in the village Rose Queen walk, around 1958. She’s wearing the outfit she wore for her wedding.

My mum digging out in the winter of 1954. She’s pregnant with me.

That photo of my mum is now on the wall in The Pack Horse, Affetside. How it got there is a complete and utter mystery! We all went to share a moment with my mum for my birthday. 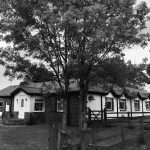 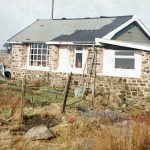 My old house now looks like this. It used to look that that (with our turquoise Land Rover – ex army – outside).

Walking up the lane to the village. My old school is on the right 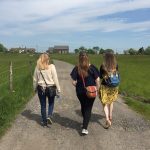 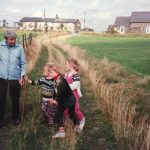 Walking down the lane with my mum in 1992. Nothing much has changed!

The Holcombe hunt were frequent visitors to our fields.

Same view today! My dad and I planted these trees. He bought one thousand one inch trees. Now they form a beautiful arch over the ‘drive’ which has recently been paved. 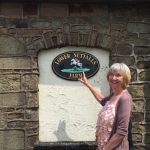 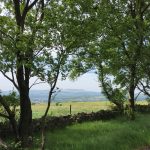 This was the view from my bedroom window – except that the trees hadn’t grown so tall when I lived there.

Next stop was to go and say hello to my mum. We’d made an appointment at the cemetery and we were shown to the grave. She’s buried with her parents. 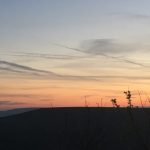 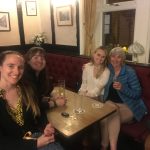 In the evening we drove out towards Haworth to catch a wonderful sunset and were the only customers at The Friendly in Stanbury. What an amazing day!!!!

A week with R&S