Above my breakfast table at Hotel Gresi, Catania

I was awake by 7, so that I could take my time getting to the airport for a noon flight. Unlike my outward journey this would be a direct flight, and also my first experience with Ryan Air. Feeling much more confident after a week on the island I elected to take the bus to the airport and it stopped just outside Hotel Gresi. As I was checking out along came Kathleen also bound for the airport, though her journey home to Australia was going to be a LOT longer than my little flight. We were both pleased that we’d have someone to negotiate the bus with, especially since it didn’t arrive for 40 minutes (they are every 20 minutes – ha! ha!) and by the time it arrived we’d been joined in our wait by Lisa and Trish who were flying back to Canada. I felt so lucky to have such an easy journey home. 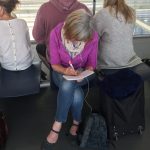 I’d planned to write in my journal about the trip to Etna at the airport. I have to say Catania airport was really busy, noisy, frenetic and I had to put on my headphones to escape the hustle and bustle. Listening to Terry Riley’s Rainbow in Curved Air seemed appropriate in many ways, though Philip Glass’s visions of frenetic New York City would have worked just as well. I asked the lady sitting next to me, on the uncomfortable backless bench, to take my photo. She and her husband live in Holmfirth, just a hop and a skip from Hebden Bridge. Safely on board I noticed that the man in the row in front of me was reading Simon Armitage’s book (which I have) called A Walk Home. How appropos.

Back in Manchester it felt rather chilly, especially since I didn’t have a jacket but it wasn’t a problem until I found out I had an hour to wait at Manchester Victoria for the last leg of my journey. There is no, absolutely no, waiting room at this large busy station. There is a little Marks and Sparks food store where I could pick up a tiny carton of milk and a ready made Indian tikka masala that would provide dinner when I arrived home. Meanwhile I went in the almost deserted bar, with view of Cheetham’s music school, to while away the hour in a less drafty place than the station platform. 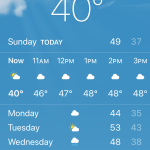 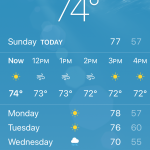 I arrived home just before 5 and found myself daydreaming about where I’d like to go next! Islands seem high on the list judging by my last few trips: Outer Hebrides, St. Kilda, Orkneys, Shetland, Ireland and Sicily – hmmm . . . .  . 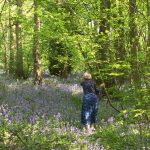 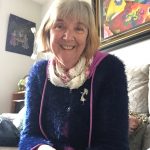 Back home in Hebden Bridge the rhododendrons and the bluebells had blossomed.