My new living room has a verandah overlooking the  weir

Just before dinner I walked from my mill to Mytholmroyd.

Fishermen on the Rochdale canal in Mytholmroyd

These geese have obviously been told to ‘keep their ducks in a row!’

Sarah flew back to the US this morning and I moved into my new home:

I have a place on the top floor in the centre of the building, overlooking the weir.

Sarah on Blackstone Edge, a last view of T’tops before she flies home

Hollinworth Lake, one of my mom’s favourite day’s out.

One of my ancestors lived in this White House in Manchester. He was a schoolmaster. In 1905 he walked out of his house and drowned in the Rochdale canal a few yards from his house.

The note I put through the letterbox

Our hotel in Stockport so that we are close to Manchester airport.

Chicken korma and chips in the hotel

A day of heavy, non-stop rain so we went for our first train ride on this trip.

Children walking home from school in the rain. Very few umbrellas about.

Beneath the railway viaduct in Todmorden, a small market town on the Lancashire/Yorkshire border

A full English breakfast – for lunch

I bought some artwork from this guy last year and I went to chat to him about the new mascot for Todmorden: Stanley Pike (see our Stoodley Pike hike)

The stunningly beautiful St Peter’s Sowerby, a Grade 1 listed building, and the best example of a Georgian church outside London. The current congregation is between 15 and 30.

The church warden agreed to open up the church for us. He came with his two dogs who were enchanted by the organ music!

The view from Jean’s front window – spectacular, even on this wet afternoon

With author Jean Illingworth and her husband.

It turns out that my Barraclough ancestors dating from the mid 1600’s  are buried here. The church is very austere on the outside but beautiful inside.

Me playing the organ in this beautiful church.

This evening’s entertainment: an interview with Dr Mike Green, home office pathologist who worked on the Yorkshire Ripper case and the Ian Brady and Myra Hindley moors murders.

In conversation with Mike Green in Hebden Bridge library.

We were fortunate enough to be able to have a celebratory breakfast in the room where Charlotte, Emily, Anne and Branwell Bronte were actually born. Many years ago we visited the place and at that time it was the home of a novelist. She was happy to take us on a tour of the small house in Thornton where Rev Bronte was an assistant minister. This was before the family moved to Haworth.

A pot of Darjeeling came with its own timer!

Inside the Bronte Birthplace. It’s now a cafe.

We were served some delicious pastries

The place was being painted.

The railway viaduct near Thornton

A late lunch in Wetherspoon’s pub in Brighouse. Originally this was a Methodist chapel, and the organ and pews in the balcony are preserved.

I had to sample this beer – in honour of all the Bobs in my life!

Instead of ‘designer Zales’ we found ‘designer bales’ just outside Mytholmroyd. 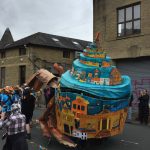 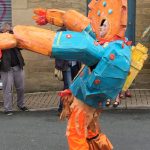 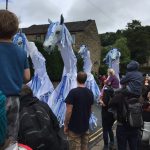 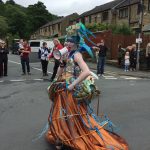 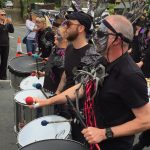 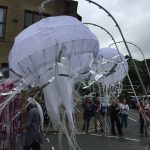 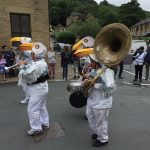 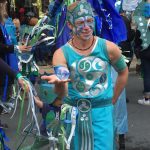 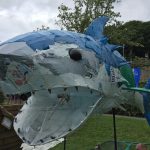 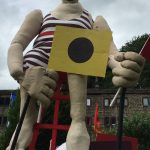 More artwork from the festival

An evening stroll along the canal

A Day in Haworth

First we had coffee at Sauce in Hebden Bridge’s Town Square. There were lots of people around since today is the beginning of the week-long Arts festival. This year the theme is Hebden Water.

At the bus stop waiting to catch the bus to Haworth we got into conversation with this wonderful gentleman.

I’m not sure what the Bronte family would have made of the  ’60’s weekend in their home village of Haworth  but Sarah and I had a good time. The Black Bull was Branwell’s favorite haunt when he was living at home in The Parsonage. The apothecary which supplied him with laudanum which brought about his early death at the age of 31 is still there. We had lunch in a cafe that had to close just after we were served because they were too busy to serve customers in a timely manner! 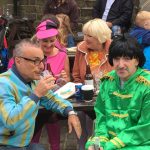 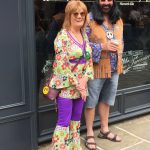 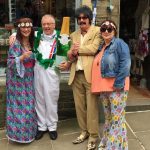 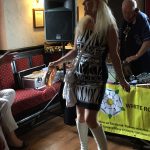 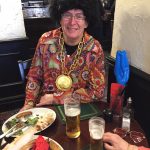 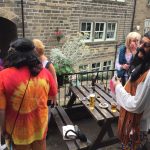 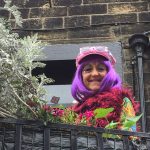 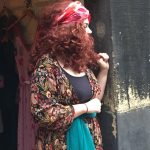 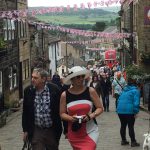 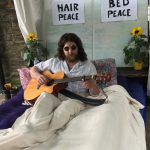 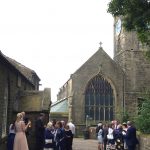 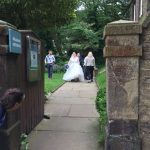 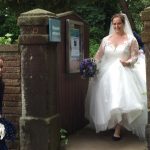 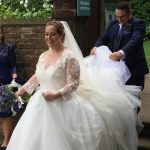 Then we headed for the church where the Brontes were buried, the parsonage where they lived and the school where they taught the local village children. A wedding was being held in all those venues. Here’s the beautiful bride leaving the photo shoot on the Parsonage steps and heading to the school (that Patrick built for Charlotte to teach in) for the wedding reception.

These beautifully decorated organ pipes were removed from All Souls years ago because of vandalism. They have recently been returned and just lie on the floor in the sanctuary

My great aunt and uncle’s grave at All Souls, Halifax

(Above) Our early morning visitor

(Above) A Muscovy duck welcomes visitors to the Visitors’ Centre.

(Above) Stoodley Pike is visible from all of Calderdale. Last year I bought a postcard of the monument and I’ve looked at it every day when I opened the fridge. Today, with Sarah’s encouragement we climbed to the Pike and ascended to the  viewing tower. 6 miles and 50 storeys.

(Above) I sang ‘sheep may safely graze’ to these sheep but for some reason they didn’t seem too impressed.

(Above) Ancient gateposts above Withins reservoir, and yes, the water really was that colour.

(Above) Journal writing in The Lord Nelson at Luddendenfoot. This was the favourite tavern of Branwell Bronte. He wrote some of his poetry in this pub, and drank many a pint when he was working as a railway clerk at Luddenden station

(Above). A much-deserved pot of tea in the Lord Nelson after our strenuous hike to Stoodley Pike

Through the bartender in the White Lion in Heptonstall we managed to connect with with these three current residents of Lilly Hall, Heptonstall. My great great great grandparents lived there in 1841 and though William died in 1837 Sally, his wife,  gave birth to a baby girl, Elizabeth Ann three years later! Over the course of this last year I have discovered that Elizabeth Ann’s father was, in fact, James Wrigley, the man who lived in the other half of Lilly Hall. The Hall, probably built around 1770 is currently divided into 4 dwellings. We arranged to meet the current owners at Quiz Night in the White Lion – which began at 9:30 p.m and finished at 11:15 – a long day out!

Careful you don’t fall into the sheep fold

Attending a meeting of the Ted Hughes society. They are currently planning the  2018 festival to celebrate the 30th anniversary of the former poet laureate’s death. Two of the attendees are Literature professors at Huddersfield University, one of my alma maters.

Family connections? I have both Barracloughs and Gledhills in my ancestry.

Home of Joseph Crossley who developed the largest carpet factory in the world. Several of my ancestors worked there

Heading for the Gibbet, last used in the 19th century