The check in  line at Air Canada

Toronto. A scheduled 4 hour lay over – plus a 2 hour delayed flight!

7 weeks to the day since I arrived so I thought it only fitting that I went full circle and had dinner where I had dinner on the night I arrived. Today I chatted with my host as I packed my bags feeling sad, and very conflicted. Over the last 4 days I’ve talked to several people, some for the first time, and some whom I’ve known for many years, about what I feel would be the differences in my life living in England as opposed to living in Santa Cruz. Of course, it’s all conjecture. Here I’m somewhat of a novelty – a Californian in town for a limited time trying to fit in as many things as possible. But that’s not real life, is it? A strange coincidence happened today, which just typifies what I see here. The journalist who showed me around Sowerby put me in touch with a friend and colleague of hers who lives in Hebden Bridge. We met for coffee for the first time – and ended up suggesting we do a house swap. When I mentioned the encounter to my host it turns out that she’s a good friend of hers. My host once moved to Spain but ended up returning to Hebden Bridge because she found it difficult to become part of the society in Spain because it’s centered so much around the family. As Colin said so aptly, ’the problem with having lived in two different cultures is that we end up wanting the best of what each has to offer. 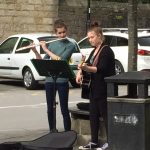 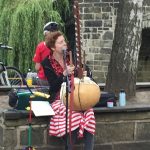 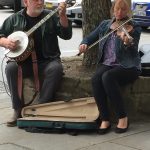 A Sunday in Hebden Bridge has a somewhat Santa Cruzian feel

Today I bought 4 books – oh, the extravagance of the woman! One was Ted Hughes’s The Remains of Elmet and the other was Up North by Simon Armitage. Hughes’s collection of poetry has so many poems about the area that I’ve visited over the past few weeks: Lullenden, Hardcastle Crags, Top Withens, Haworth Parsonage. I spent the afternoon inserting these poems into my blog.

I took myself out for a late lunch in a lovely restaurant – Rendezvous – which I’ve never noticed before though I must have passed it many times. There I dipped into Simon’s book for the first time and found myself laughing out loud at his wit and humour as he depicts his life in a northern town. To prepare for our trip to Ted Hughes’s house yesterday I had watched a documentary , and Simon Arminitage (currently professor of poetry at Oxford) was one of the key commentators. As I watched I couldn’t understand why he was conducting his commentary from a seat in an empty theater until I realized that it was the Old Movie House in Hebden Bridge (where I’d gone the first week) because Ted Hughes did several poetry readings there. Late news: my current host had worked at the Little Theater, also where I’d gone to a show the first week, sometime as an actress and sometimes working behind the scenes.

My Caesar salad has just arrived thirty minutes after I ordered it, but the chicken and the bacon are hot off the grill, and I’ve been able to write seven pages in my notebook as I waited – though why I just found an anchovy in it remains a mystery!

A day with Ted Hughes

Colin arrived at 10 a.m. after spending the night in Settle after his 25 miles Three Peaks Walk the previous day. From my window I could see him on the bridge. As it was quite sunny I suggested we went to explore places connected with Ted Hughes, one time poet

laureate who spent his life dealing with the aftermath of having his first two wives commit suicide. His first wife was Sylvia Plath who is buried in Heptonstall, presumable because Hughes’s parents lived in Slack, the next settlement. So a few minutes later we were in Colin’s rental car and off to Mytholmroyd to find #1 Aspinall Street, Hughes’s birthplace. There’s a simple blue plaque on the end terrace house which can now be rented as a vacation rental.

Then I took Colin to my favorite view of Hebden Bridge, from the playground in Heptonstall. Next we went down the very, very narrow lane to Lumb Bank, an eighteenth

century dwelling with fantastic views of Stoodley Pike. I’d walked up to this lane a couple of times (it’s close to Slack Bottom!) but I hadn’t realized that this is the home of the writers’ workshop that I tried to get a place in but they were full. There were lots of private

signs and no turnaround signs but we were fortunate is finding the cleaning lady out and about. “I shouldn’t do this,” she said, “but would you like to come in and look around?” Yeh! It’s beautifully maintained gardens open on views to die for. Several handwritten

poems by Hughes line the dining room walls. I’d love to come back and take a creative writing seminar. Classes are limited to 16 participants so you get a lot of quality time with the two teachers.

Having been in the White Lion a couple of times on this trip we opted for a light lunch in the newly repainted Cross Keys. Though we were the only occupants both the pot of tea and the pie took a long, long time to arrive. You just have to adjust to a different time frame.

With Colin at The Cross Keys