Today I woke up to sunshine AND the temperature was above freezing! I hadn’t been for a hike during this entire month. We’d had three weeks of frozen ground, and when kit wasn’t freezing it was pouring down, so today I decided to take a chance. The forecast was for rain beginning at 2pm so I reckoned I had four hours of hiking available. I headed for Hardcastle Crags where I’d had a lovely hike with Anna in November. I checked that the cafe at Gibson Mill  was open and made that my goal.

Kitty in the grass

After last night’s downpour Hebden Water was in full spate

Old mills above the Crags

Coming back into town in was just beginning to rain. This song was very appropriate! When I passed him at 10 a.m he was singing Allelujah. When I arrived back in the square four hours later he was still singing Allelujuah!!!

This lady was remarkable! Singing opera in the pouring rain.

And then one of my favourite Andrew Lloyd Webber pieces

View from the choir stalls. I sang in the choir and played the piano.

Candlelight carol service at Halifax Minster were so many of my ancestors were married. I’d never really thought about the fact that when these precious buildings were built the only light available would have been candlelight.

Prize-winning Elland silver band accompanied some of the carols

Then to my old school – Bolton School – to relive some memories. 7 years at this school. I went with my friend Judith who I met on our first day! The Great hall hasn’t changed at all, except there were no paper angels in our day. The school has been used for several TV series including Last Tango in Halifax.

In one of our old classrooms

My form room was on this corridor – #K. It wasn’t carpeted in 1966 but a few of the pictures on the walls date from then!

This one is more recent.

The place where I had my first organ lessons

This portrait of Lord Leverhulme, the school’s benefactor, used to be above the organ on the stage before the organ was rebuilt during my time at the school. We had ‘prayers’ every morning in a whole school assembly. I used to think this was a picture of the God we were praying to!

The school quad. It was indeed foggy – and we had a 2 hour drive back to Judith’s in Harrogate.

Their green feathers were iridescent in the strong sunlight

Some familiar things have arrived at my apartment – some in good condition, some not.

A quick trip to Manchester

I got a great seat! I even caught a score- one of half a dozen which were thrown from the stage for interested attendees before the workshop began. It finished at 8:16. The hall is right across from the train station so I managed to catch the 8:26 train back to Hebden Bridge. People getting in the train to the west of the Pennines looked like snowmen but it was only sleeting in Hebden as I walked home from the station. Got home at 9:15, exactly an hour from being in the concert hall. Pretty good!

The temperature was 27F. when I played for a fundraiser at Hebden Bridge rail;way station

New gloves and leggings for the occasion

. .  .included the mayor of Hebden Bridge

The ducks can walk on the ice

Drinks in the Piece Hall  tipi

My 15 boxes are scheduled to arrive on Thursday!

Christmas market  #1 at Hebden Bridge church. Katrina has her eye on the baked goods.

No, I didn’t have the kangaroo

Halifax choral society are celebrating their 200th year of continuous concerts. Haydn’s Creation was only 20 years old when it was the  first work performed by the Society, on 9th February 1818. …. “Believed to be the oldest choral society in the world, Halifax Choral Society has an unbroken record of performance since its foundation in 1817 by William Priestley. Here they are performing in the Victoria theatre with the best brass band in the world (officially) – Black Dyke Band.

It looked very inviting but I had a train to catch.

I don’t agree that the path is atrocious. I’ve enjoyed walking along the tow path several times

I went to this lecture-excellent

This is what brings a community together- and it’s free. It’s this difference between the US and England that I appreciate

I’d been thinking about taking the bus to Huddersfield just because I heard it goes over t’tops. Today looked like the perfect day to do it – bright, sunny and freezing. I can catch the bus directly outside my house, and the buses tend to be nice and warm. But rather than go all the way to Huddersfield I decided to just go halfway – to Ripponden – where I’d had a nice pint in the Old Bridge Inn a couple of times before. I wasn’t disappointed with the bus ride. It followed the route that Sarah and I had taken on our way to Manchester airport, where she had pulled over to take a photo of t’tops in the mist and drizzle. It suited her mood as she was leaving England. 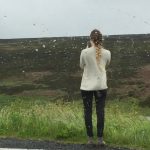 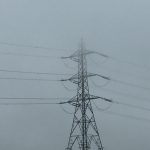 However, it was quite different today!

From the bus today

Ripponden church. Since the door was open I stepped in and found myself in the midst of frantic comings and goings as people prepared the stalls for tomorrow’s craft fair. I was welcomed and encouraged to come back tomorrow when the entire town will be holding their Christmas fair. I asked if I could purchase a couple of items today. Fine, but I didn’t have any change. What a good excuse to go to the pub next door!

The pub’s buffet. There was only one other table in use, but only one table was available. all the others were reserved! Guess this is a popular lunchtime venue.

Sense of humour. A house in Ripponden not named ‘My Repose’, or ‘Grand View’ – just ‘The Crumbling Old Wreck’

My find at the church fair

Bumpy bus ride across the moors

In the summer of 2016 when I was staying in Hebden Bridge my eye was constantly drawn to an imposing building on the North side of the river. I could see it from where I was staying and so finally one day I decided to find my way to see it up close. This is what I wrote in my blog about that day: ‘So a day without plans . .  . From my room I could see an imposing old hall across the valley, a little higher than my building so, around 11 a.m. (a lazy morning writing up my blog) I headed up New Road which climbed steeply until I came to the hall. Despite the intermittent downpours there was an amazing view from this elevated position and I could just seen the window of my room peeking out between the trees.’ Yesterday afternoon I was kicking my heels at home. Amazon had promised to deliver my new mattress topper on Tuesday and I’d basically not left the house as I waited its arrival  apart from a quick trip to buy milk on Wednesday afternoon. Now it was Thursday and  it had just arrived – yeah! Still feeling lethargic I browsed around my ancestry research and came across a reference to Weasel Hall. Abraham Crabtree, the paternal grandfather of  the husband of my 3rd cousin 2x removed (!!!)  had lived at that address from 1871-1891. I suddenly recalled   that the old hall I’d walked up to  was close to a railway tunnel called Weasel Tunnel. In fact I’d taken a photo of the sign because, in error,  Hebden had been spelt Hebron. So, just as the sun was setting, i.e. 3:30 p.m. I set off to see if the hall could possibly be Weasel hall.

Unlike last year when I just took photos of the views of the valley  from the hall I wanted to know more so I knocked on the door. “You don’t know me but my ancestors used to live here several generations ago,” was my conversation starter. Within minutes I’d found that the current owner had been a pizza delivery man in Bolton (where I grew up). I’d found out online that the present Weasel Hall only dates from around 1840: “Constructed by the Manchester and Leeds Railway Co. c.1840 to replace Weasel Hall which was demolished in the construction of the railway line. Hammer-dressed stone, stone slate roof. 2 storeys. 3 cells each.” The current owner suggests that the ornate chimneys may have been salvaged from the earlier hall because they seem far too grand for a simple country hall. He’s lived there for 12 years and when I asked him who had renovated the place he mentioned a man called Barker who currently lives in a renovated farm near Stoodley Pike  – with no road access. I wondered if it was one of those lovely farms Sarah and I had passed on our way down from Stoodley Pike in the summer. The more I looked at Weasel Hall from different angles the more it reminded me of Lily Hall. In fact Lily Hall is directly across the valley from here, perched precariously on a steep hillside. The proportions of the buildings are almost the same. I seemed to recall Anne telling me that Mr Barker renovated Lily Hall. I checked up, and sure enough, the same person appears to have renovated both buildings around the same time. Wow!

View from Weasel Hall’s deck. I could make out my apartment and the church where I have the  rehearsal for the carol service tomorrow night.

Almost dark. Back at Hebble End

Stairs leading up to Weasel Hall (photo from summer 2016)