The joys of local newspapers

I bought a ‘Halifax Courier.’ Here are a few articles that show what’s uppermost in the minds of local people – me included!

The McVitie’s factory is in Halifax

in Sowerby village, where my ancestors lived in the 1700’s

Nice to see music in school alive and thriving

From the 1918 Halifax Courier

Part of my own research into my ancestors is trying to find out just what was going on around them in their daily lives. I don’t just want to list births, marriages and deaths. As I sat in the Bridgewater Hall last night listening to Joshua Bell and the Academy of St Martin’s in the Fields play Vivaldi’s Four Seasons I found myself wondering which of my ancestors were alive when Vivaldi was. Wouldn’t it be fun to intersperse my ‘Family Books’ that I’m writing with which composers were alive when my forefathers and foremothers were. Here’s a selection of events from the Hebden Bridge almanac of 1871 that I found in the town’s archives one cold, wet afternoon last week.

Art classes – the best thing you can do on a cold gloomy day! 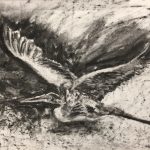 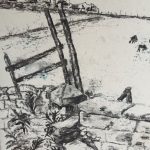 Now that i’ve got my artwork reframed my little place is definitely feeling more homely. It’s pretty amazing to be quilting in a room that was built by my ancestors in 1863 – as a sewing shop, complete with wheels in the ceiling that ran the machines.

An all day felted landscape workshop. Excellent teacher. Learned a lot about the early woollen industry in which my ancestors were very involved.

A trip to Manchester

Sitting at the very desk that Marx and Engels occupied!

I took a tour of Chetham’s library with its ancient books. 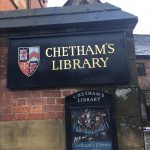 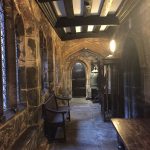 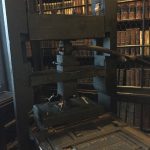 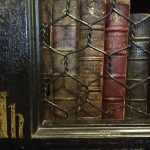 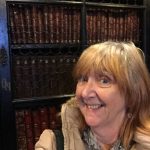 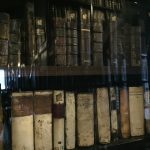 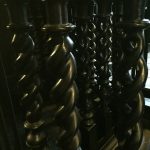 Then attended a concert  in Manchester Cathedral (where several of my ancestors were married) by young students at Chetham’s school of music. 4 students between 12 and 14 played first movements of concertos!

Entertainment at the Vegan Fair in Hebden Bridge 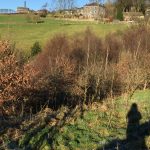 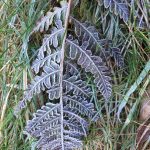 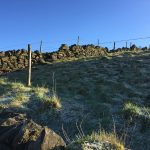 Hike up to Old Town – frosty and sunny 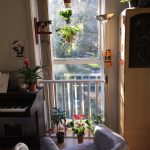 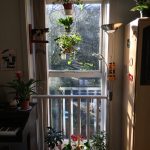 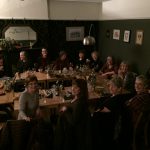 Dinner with a lovely group of women. 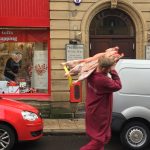 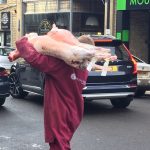 Life in a small town  hasn’t change much in 60 years. Yes, I know that the butcher’s meat comes from real dead animals but I don’t expect coming fave to face with a dead pig, or several,  on my way to the library!

First order of the day was to find a framing shop that could replace the glass in all my smashed pictures. I found one-in a former weaving shed that, yes, you’ve guessed it, the Wrigleys built. Then to clean up my kitchen for the arrival of my new chair and rug. I’d just finished sweeping the soil from last night’s fall of the hanging plant (sounds like a Halloween movie) when the chair arrived. it was a bit of a squeeze getting it in through the hallway but it was worth it. So now I have have comfy chair to sit on in the kitchen.Just before dark I went for a walk, just aiming to get a nice view of the town since it wasn’t raining, or fog-bound. I found myself on a steep road towards Old Town called Sandy Gate. I’d heard of it because people had been complaining that it hadn’t been gritted in the frosty weather, so I knew it would be very steep. Soon I was really high! I could see the lights across the valley at Lily Hall, both churches in Heptonstall and as I stopped to catch my breath three deer  crossed the road in front of me. It’s a magical time of day and I felt closely connected to my ancestors.

Looking across to Heptonstall

Looking down into Hebden

When I back into town I picked up a library book and headed for a beer in the White Lion. Imagine my surprise when I discovered from the book that a long time ago a man had been deported for seven years for stealing a ham from that very pub. Liszt had also stayed there, and a scene from Happy Valley was shot there too.

When I got home I made a phone call to a Wrigley descendent who is now in his 90’s. He has in his possession a handwritten ledger by his grandfather, John Edward Wrigley, itemizing all the buildings that the family worked on throughout several generations. It’s a electronic copy of this book that I obtained from the Hebden Bridge family history society that has given me all the names and dates of the Wrigley buildings. Now, perhaps I’ll be able to see the actual book! Check back for updates.

Jan 4 – a day of meeting people 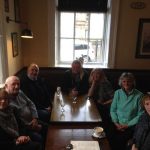 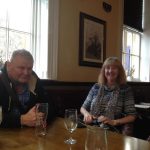 It took me a little less than an hour to get to Huddersfield, where I had gone to college for a year in 1972. I don’t think I’ve ever been back since I left, and now i find myself going there twice within twenty fours hours – how strange! I had to change trains in Brighouse and I was very surprised to find that it’s only 19 minutes by train from Hebden Bridge, so that amazing Wetherspoon’s (former Methodist church) is quite accessible for an evening.

Station bar is called The Head of Steam – quite lovely.

My first Meetup group in England

Ten people showed up for coffee and lunch at this Chatty Meetup group for the over 50’s. I thoroughly enjoyed the conversations, ranging from recent movies, to The Pub Trail (in which this station cafe is featured) to deeper topics.

In the evening I had arranged to go to the annual Winter dinner of the Halifax Concert Band. I’d attended one rehearsal before Christmas but intend joining the group next week.

Around 40 band members showed up. It’ll be a good networking experience, but of course, you can’t talk to your fellow players in rehearsals. I sat beside a friendly tuba player and soon discovered that two other people on my table work at the same school as David from Lily Hall. I love these coincidences. The food was very good – everything from Italian to Mexican. I asked our waiter to take a photo of our group and he included one of the other two waiters – very nice! Wore my new jacket and tried to go ‘British” so didn’t take an umbrella despite the storm – and I didn’t get wet! It works.

The weather forecast was for rain from 10 a.m. onwards, so faced with the prospect of having a severe case of cabin fever I decided to spent the day in the newly opened archives in Halifax. Well, it couldn’t be worse than New Year’s Day. Could it? I dressed accordingly. I’ve found that all the libraries are kept at a constantly  warm temperature which means that in two layers of jumpers I overheat immediately. I just guess they have to stop the books catching cold!

Walking through the Piece Hall towards the East gate there was a placard in the walkway stating that the library would be closed today from 9.30 til 12.30 for staff training. Darn it. Well I guess I can wander around the town and look aimlessly at the shops – not something I particularly relish, but it’s ok for once. At least the rain hadn’t started. And yes, yes, that’s blue sky overhead. Well, just a few centimetres showing. So two hours, a coffee and scone later I returned to the library only to find the placard still in place. For one nasty moment I thought the library was still closed, but someone was just coming out so I thought Ah, they’ve forgotten to remove the sign. The lady coming out handed me a leaflet and said, ‘Library closed today.’ Two other customers arrived. ‘But the sign said it was closed til 12.30 today’ said the man. ‘Yes,  that’s right ‘ said the leaflet lady. ‘It’s closed all day on Wednesdays. Here’s a leaflet to show you the new opening hours. see? It says closed on Wednesdays!’ ‘Well, you need to remove the sign. It’s misleading,’ we all tried to explain to her, but she didn’t understand.

Well, now what to do?  er . .  . .hm  . .  . Go to the bus station and find out where my day rover will allow me to go for free. I arrive at the bus station information desk. A sign on the door states we are closed today until 1.30. It was 12.45. Note to self. Avoid Halifax on Wednesdays! I had toward the first bus I see. ‘Is my Day rover ticket valid on this bus?’ ‘Yes, get on.’ ‘But where is this bus going to?’ ‘Huddersfield.’ So 40 minutes later I found myself in Huddersfield. So it’s over 40 years ago that I went to college here, and I had planned to go tomorrow! Oh well. It was a nice ride, through Elland where some of my ancestors had lived. I didn’t recognise anything in the town, which didn’t surprise me. It has a swanky new bus station. When I got the bus back to Halifax it took a completely different route, all around the houses through Rastrick and Brighouse. I enjoyed my 2 hour ride to Huddersfield and back, looking at the different styles of architecture over three centuries. Back in Halifax it was almost dark. Well, it was 3.30 by now! On impulse I thought I should take a look in Poundland. I’ve always had a soft spot for the place ever since Simon Armitage was so scathing about it. There’s usually something I can find in there to treat myself without breaking the bank, and today was no exception. For the first thing I saw was a knee- length jacket. Having bought it, and three balls of wool, there was no way it was going to fit into the tiny plastic carrier bag I was supplied with. Never fear. Put it on – underneath my raincoat.Ha!

Perhaps I’ll wear it tonight when I go to see Jane – the new movie. It’s new footage of Jane Goodall but I’m really just going for the music: a brand new score by Philip Glass.

There was one thing written on my calendar for the first day of the New Year: a guided walk of the Georgian buildings of Halifax, scheduled from 2-5pm. Rain was forecast but I’d been on hikes in the summer in the pouring rain and it was ok, so off I went on the train. The centre of Halifax was like a ghost town. Everything was closed and there was no-one around. It was at least 10 degrees colder than it had been in Hebden Bridge too. As I made for the bathroom in the Piece Hall (a place that’s always nice and warm) the grand gates were just being closed, “We’re shutin’ luv!” As I circled the perimeter of the vast enclosure I had visions of being the only crazy person but as soon as I turned the corner I came face to face with over 30 people, all looking very cold. The tour guide seemed totally unfazed by  both the rapidly dropping temperature and the rather insistent  wind that was gathering and making her hand-outs take flight. “Can everyone hear me?’ she called. A few mutterings came back as an answer. “OK, then, off we go.”  ” ‘Scuse me,”  I called, “Your mike isn’t on.” “Ah, yes! It’s not been working too well recently. It’s been crackling a lot.” And that was that! “We should have started off by me taking you around the Piece hall, Halifax’s magnificent Georgian structure, but for some reason it’s closed today.” So we then stood for 20 minutes with a gathering wind passing out really interesting maps of Georgian Halifax. Then the rain started – in earnest. The sound of the rain splatters on people’s umbrellas drowned out everything our guide was saying and after an hour I gave up and went home! I pity, because I was really interested in the information she was sharing.