A week with R&S

The morning after my birthday Anna left to travel around Belgium with an old friend of mine from college days who now operates his own tour company, and then to visit a friend of hers in Denmark. We were heading out for the Big Sing in a rainy Piece Hall in Halifax. There was a tradition dating back 100 years that up to 1000 school children would gather in the Piece Hall and sing together at Whitsuntide. Since the reopening of the renovated Piece Hall in August 2017 many historical event have been recreated there and this was just one of many. 600 children had been taught songs which some of them had supplied the words for, and the lyrics had been set to music by members of the Calderdale Music Trust.

The girls had been given the opportunity to spend a night on Nicola’s canal boat and were very excited by the prospect. She warned them about the pitfalls – being woken by cackling geese or crowing roosters but they seemed to sleep through all the commotion. We spent the next day driving around the tops, having lunch at Brosters Farm shop with an amazing view out over Halifax, and stopped for refreshments at the Wetherspoons in Brighouse which is located in a church – a Methodist church at that! But its a lovely idea, and the organ is still in place in the gallery.

Next stop was Saddleworth Moor to see the memorial to Keith Bennett who, at the age of 12, was one of victims of the Moors Murderers, Myra Hindley and Ian Brady. I recall sitting on a swing in a park in Tockholes, as a 8 year old, looking out onto the moors and wondering if the moors that I could see were the same ones on which the murderers buried their victims. I don’t ever recall being on Saddleworth Moor before, and its very beauty somehow made the crimes even more disturbing.

We drove next to Lumbutts. My mum had mentioned Mankinholes Youth Hostel to me many times. I’m not sure if she had stayed there or was just intrigued by the name! We stopped at the Top Brink pub for a drink and then crossed the street to see the grave of Abraham and Mary Wrigley. Abraham was my great, great, great, great uncle. His daughter, Mary, died aged 13. One of his sons, John, emigrated to New Zealand in 1863. It seems almost incomprehensible to move from Todmorden to New Zealand at that date. A lot  the information I have about that side of my ancestry comes from a distant relative who I ‘met’ through Ancestry.com. She lives in New Zealand, and sent me some photos of the Wrigleys. 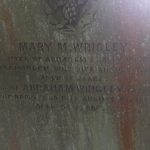 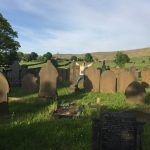 This is Abraham, who is buried at Lumbutts and his son, John who emigrated to New Zealand.

Next morning Sarah wanted to revisit Bridestones rocks which we had visited together last summer. Outcrops of millstone grit are common on the hilltops in this area and you can have a great time conjuring up faces and dragons in their weird and wonderful shapes. It was a lovely clear day but quite windy. 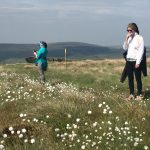 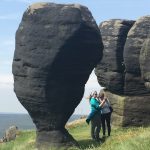 In the evening Sarah and I went to explore Widdop Moor and reservoir. There’s a bus out to this remote spot that just runs on summer weekends, but I’d not been on it so since we had a car it was the perfect time to go on a recce. We timed our evening drive just right for some great light. We walked across the dam and a little way along one side of the reservoir. 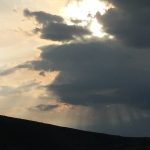 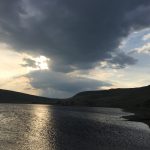 Next morning I bought a printer and DVD player, making use of the car to transport them home, and then we had lunch in the Loom Cafe at Dean Clough mill. We went to see the amazing lego model of what was once one of the largest mills in the world, and the largest carpet factory in the world. I think my Auntie Lil worked there. Sarah managed to find in the visitors’ book her comments from our visit last year.

Then it was a clamber up the 369 steps to the top of Wainhouse Tower. It’s only open a few day each year so this was a first for me too. We all received a certificate to commemorate our visit.

Mr Wainhouse built many houses for the people who worked in his dye works. Not content with climbing one tower we hurried on to Heptonstall where the church tower was supposed to be open for the public to view. As far I can gather this is a very rare occurrence and there were several people who’d lived in the village for 20 years and had never climber the tower. I’m not surprised! The health and safety people in the US would never, NEVER, have allowed us up. By the time we got to the top we had to climber through a window and then clamber onto the roof itself. It was wonderful – even though I’m not particularly comfortable with heights. Looking down onto the graveyard where my great, great, great, great grandparents are buried and onto the village where they lived for several generations was a wonderful experience. Our guide explained the workings of the bells and the clock too.

Hanging on for dear life! 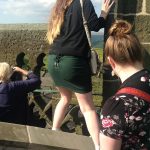 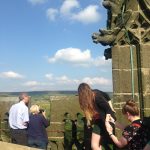 It just happened that David from Lily hall was taking the tour too and he invited us back to Lily Hall. Now all the girls have stepped inside the building where, in 1842,  Elizabeth Ann had a child with the young man next door, after her husband had died from ‘alpaca wool poisoning’, thereby connecting my family with the Wrigley family (some of whom emigrated to New Zealand, and others who built a lot of buildings in Hebden Bridge, including the one I’m living in).

We joined people, and doggies,  for drinks in the beer garden at The Cross to complete a wonderful day out.

Next morning we were off bright and early to catch coffee morning at St Paul’s in Astley Bridge, the church and day school  where my dad was raised. It took a little over an hour to drive there, whereas on the one time I took public transport it took me 4 hours each way! We were welcomed with open arms and spent a lovely hour looking round the church where my great grandad was organist and choir master for 35 years, and chatting to Sylvia. Of all the people I know, she ‘gets’ my move back to England. She spent 46 years in South Africa before moving back to England about 10 years ago. 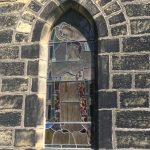 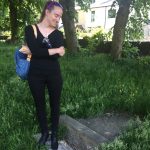 There’s a stained glass window of St Cecilia dedicated to my great grandad, but his grave marker has fallen over, and has been that way for several years, though I have photos of it before it fell over.

Just a couple of minutes’ drive took us to All Souls where my great uncle on my mum’s side of the family was a bell ringer. There’s a large photo of my great grandparents, John and Maria Hill in their history display. I wear her wedding ring. 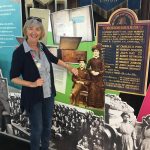 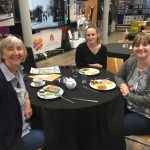 We had lunch in their little cafe before going up to Affetside for our second visit. Just as last June when Sarah and I visited, Geoffrey Bond was mowing the grass outside the little church. He must be in his 90’s by now. When I attended the Sunday school, which doubled as my elementary school for the rest of the week, Geoffrey played the organ. I once sand a solo at the sermons. I was probably around 8 years old. We chatted to Geoffrey and just as last year the church was open. It’s very strange to stand in a place like that which I knew intimately and try and put myself back to that age. I went to school there from age 5 to 11. I remembered the cupboard where the books were kept, the view out of the window, where I stood to sing my solo! and where the headmaster sat at lunchtime. There was no break  fro the two teachers in a two roomed school! 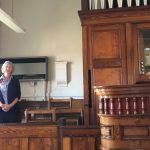 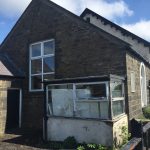 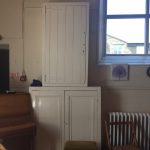 We took a little stroll down Black Lane. There wild flowers were amazing. I don’t remember them being so vibrant and prolific when I lived there. I suppose I just didn’t notice them. 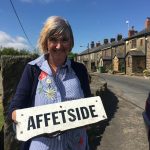 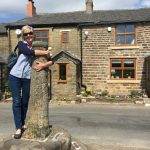 I was very, very tempted to abduct the ‘Affetside’ sign laying by the old cross!

Next to Holcombe Tower, built to commemorate Holcombe’s famous son, Robert Peel, founder of the ‘bobbies’, ‘peelers’, or to the uninitiated – the police force and prime minister. As a child it used to be a long long way to the top. These days we seem to be able to get up the hill in no time at all. The views are well worth it, for this is the start of the Pennine mountain range that runs along the backbone of England. 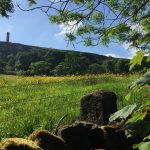 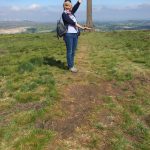 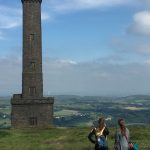 We spent the next day at Saltaire where a former mill, processing alpaca wool, was founded by titus Salt, using the power of the River Aire. It’s now a wonderful museum (all free, of course), set of galleries, including some devoted to the works of David Hockney, cafes and shops. Salt built an entire town for his employees – schools, churches, hospitals, houses – and I believe that one of my ancestors lived in a house there, though recently I have begun to have doubts about the veracity of that particular line of research. Must add it to my ‘things to do list.’ 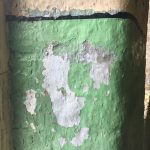 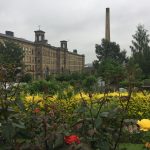 Our final day together in England was a day of furious packing, Sarah for her return to San Francisco and Rachel and I for our 5 night get-away to Iceland. We did manage to set aside a few hours for a hike into Hardcastle Crags, where Gibson Mill’s cafe, which is totally off the grid, wasn’t able to offer us tea because it hadn’t been sunny enough to generate the necessary power. Darn it. Had to settle for a beer instead!