It’s 10:40 a.m. and sitting on a backless bench waiting at Gate 22 in Catania airport to fly home. When I use that word ‘home’ I catch myself double thinking it. Is home where I live, or is it where my children live? What must they think when I use that word meaning on the other side of the planet from them. OK, ok. It must be time to turn on the headphones and write rather than ask myself answerless questions. How about A rainbow in Curved Air by Terry Riley? Recently watched an excellent documentary about the minimalist movement. I hadn’t realised that he lived so close to me, just outside San Francisco.

I saw Alicia at breakfast and she is leading another tour group, going out today. It’s probably both a case of getting on the horse again after a fall, and a need for distraction. 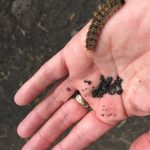 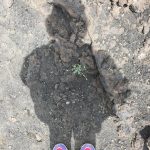 Last night was the first night I didn’t write up my journal before I went to sleep. I knew there’d be lots of time at the airport to do it. Yesterday was our Etna day. It was a little chilly and overcast as we left the farm and piled onto the minibus. Francesco explained that if the weather looked troublesome in any way once we were at the drop off point we wouldn’t be hiking. In my effort to pack as lightly as possible I hadn’t brought a jacket so I just put on as many layers as I could deal with. It was also the first day that I’d worn my sneakers – brought especially for this day. 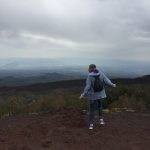 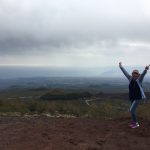 It was a much longer  drive to the ‘Etna village’ than I expected seeing how close we looked to the upper crater. It took two hours of traversing across lava beds radiant with Spring wild flowers. The top of the mountain was still covered in mist. Yesterday we had seen smoke billowing from the top. It’s very much an active volcano and we were given strict instructions about keeping to the designated paths. Visions of Bumpass Hell, the area at Lassen Volcanic park came to mind. Mr Bumpass fell into a boiling mud pot and had to have his leg amputated. After a brief bathroom and coffee stop at ‘the village’, merely a tourist stop off point, we drove to our drop off point – 1986 metres. It was quite cold as we set off through the pine forest – so Lassen! Our path was really, really steep but at least it was on blocks of lava rather than cinders where you take two steps forward and slide one step back! 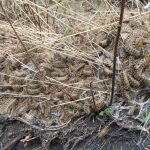 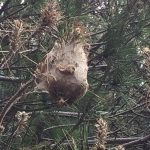 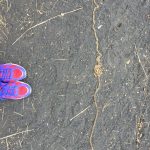 I immediately became enthralled by caterpillars  –  of all things! They were in processions across the path, nose to tail in strands several yards long. Sometimes they were in a big mound, and on closer observation I could discern that before they reached the path they were suspended from the pine trees in huge webs that looked like giant cotton balls – hundreds to a pod. Ah, these were the webs I had seen on the trees at the farm last night. I eventually picked one up in my hand. It wasn’t until I arrived home I found out more about these fascinating creatures: ‘The pine processionary  moth is one of the most destructive species to pines and cedars in Central Asia, North Africa and the countries of southern Europe. The urticating hairs  of the caterpillar larvae cause 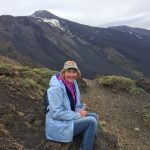 harmful reactions in humans and other mammals. The species is notable for the behaviour of its caterpillars, which overwinter in tent-like nests high in pine trees, and which proceed through the woods in nose-to-tail columns, protected by their severely irritating hairs.’ OK. I’d better keep a look out for any ‘harmful reaction’ I experience.  I’d never seen anything like it. I think it would have been wise of Francesco to give a note of warning to his group before the hike. he did remark that he was surprised that so many were out on the path  on a Saturday morning since they must know that the tourists will be out in force. These creatures were everywhere!

As we reached the top of the treeline the top of Etna came into view in one direction, and in the other was the vast expanse of Catania with hits beaches beyond. It was a landscape dotted with cinder cones almost all the way to the coast. Our goal was the 2200 metre outlook point which overlooks a recent lava flow. Very little vegetation had managed to establish itself so far here, just the odd wildflower clinging precariously to in some sheltered niche. I was a little disappointed not to be hiking farther, but we’d 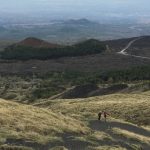 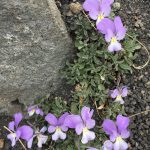 reached out goal, walked 5 miles, and, according to me iphone, had climbed 64 floors. I’d like to have had the time to go up the chair lift too. On the way down the clouds had blown away and it had become muggy. I was glad we’d had an early start. We met a few other small groups like hours but back at ‘the village’ the big tour buses were  just arriving. School groups were being herded along the road. The line at the ladies’ was so long I went into the men’s. 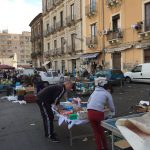 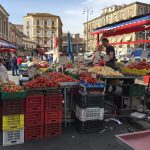 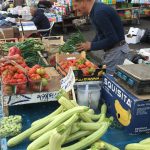 It was an hour’s drive back to Catania and Hotel Gresi from where we had started our adventure. We were to have a free afternoon and meet at 7:15 for a farewell dinner. I emptied half a shoe-ful of volcanic cinders from my sneakers and jumped into the shower. I explored the outdoor market with fruit, veggies and second hand clothing filled 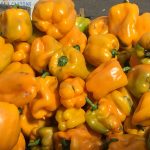 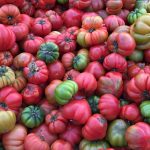 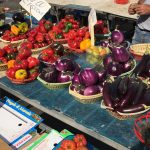 the square. Most of the shop keepers in this particular market were North African. It was unusual day weather-wise and in spite of there not being a cloud in the sky it suddenly began to rain – really big drops. Everyone looked upwards presuming that something was leaking! Then a tremendous gust of wind send the awnings from the stalls flying and litter danced in the air. All very peculiar – even for the locals.

Our farewell dinner was lovely, fresh salad, prawn cocktail and fresh fruit salad. I hadn’t had a moment’s rest or lone time  all day – 8:30 a.m.-10:30p.m. I wandered back to the hotel with Trish and Lisa pausing to look at some colourful artisan street stalls. Although there were lots and lots of people in the streets it was nowhere near as busy as the area

by the opera house where I’d stayed on my first night. I’d seen and done and met so many people  in one week that it was all beginning to get a little jumbled in my head. Everyone said the same. Thank goodness I’d kept up my journal daily (which I hadn’t managed to do in my trip to Ireland the previous month). At least my iphone records the location where each photo was taken – that’s helpful.