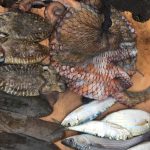 I had breakfast on the covered patio, managing to procure the first pot of tea that I’ve had on the trip. I knew that Italians are coffee drinkers but I had never imagined that it would be virtually impossible to get a cup of tea – and even then it was the American version with luke warm water and a tea bag! 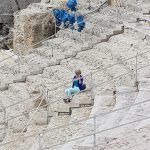 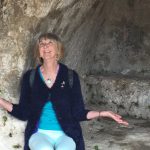 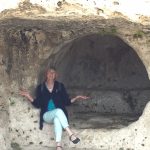 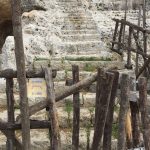 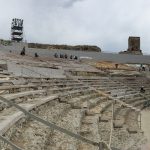 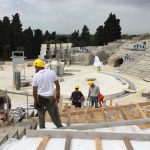 I’d arranged to meet up with Trish and Lisa, the two friends from Winnipeg, and we were going to explore Siracusa o the Hop on, hop off bus. As we headed for the bus stop we passed through the fish market, hiding a little corner in the shadow of the old prison I’d seen last night. On one of the slabs was a live octopus wriggling around. we hopped off the bus at the archaeological site where we paid an entrance fee of 10 Euros. The

place was packed with tour buses and lots of school groups but the place was so extensive that once past the entrance gate it wasn’t too crowded at this early hour. One of the main features is a Greek theatre from the 3rd century BC, though the Romans did some later renovation. The place was bustling with activity. The rough stone seats were, in some areas, being replaced with smooth wooden particle board. We’d had a few drops of rain this morning and Trish remarked that unlike the stone seats the wooden ones don’t soak up the water, so you’d be sitting in a puddle if it rained. Gantries were being erected for floodlights and scaffolding moved. Some big production was in the offing. I later found out that the preparations were for the 54th festival running May 10-July. Plays by Aristophanes, Euripides and Sophocles were being produced and . . .  the author of Montalbano, Andrea Camilleri, would be ‘in conversation.’ Just above the theatre were man-made caves. The Syracusan nymphaeum is thought to have been the ancient location of the Mouseion (the sanctuary of the Muses), seat of the artistic guild, where the Syracusan actors gathered before descending into the theatre to put on comedies and tragedies. There’s also a waterfall dedicated to the nymphs, created from the aquaducts

dating from the ancient Greeks. Next stop was the Ear of Dionysus, a natural cave that was once part of a stone quarry. It appears to have been extended by hand and used as for water storage until an earthquake prevents its further use. It is also claimed that political prisoners were imprisoned there and the acoustics were said to amplify their screams. Pigeons now roost high above the tourists. It’s 69 ft high! 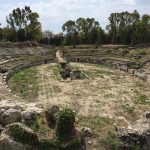 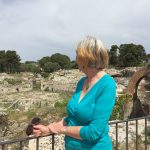 I stopped to have a cup of coffee in a quiet grove of trees before going back to the bus stop. Here a large number of souvenir stalls had been set up and while I waited for the bus I explored the stalls. I hadn’t done any souvenir shopping apart from my Montalbano fridge magnet and book. I hadn’t even been in a shop! I came away with an owl necklace to match the earrings that Rachel had brought me back from Japan, and three lemon Sicilian soaps. 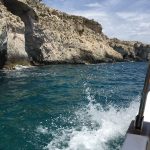 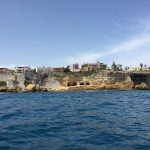 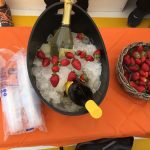 I got back to the hotel just in time to leave on the boat trip. This was an optional excursion but we were fortunate that only members from our tour were on this little boat. By now we had all got to know each other quite well, so I think that was one of the pleasures of this little hour’s cruise right around the island of Ortigia. Of course, wine

and delicious finger foods were provided for our cruise. We started out by going under the bridge – which is very low. We all had to duck level with the seat height. I’ve always made fun of people who rave about the colour of the sea in that part of the world, but I found myself doing exactly that! Dotted along the cliffs were sea grottos into which our 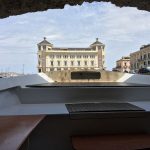 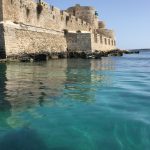 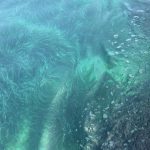 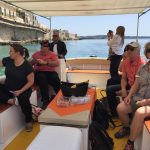 captain steered us carefully. I was reminded of the sea grottos on Capri. Why did the girls hate that place? The tourists? The water was surprisingly choppy and I had visions of the four hours of sea-sickness I had on my trip to St. Kilda, but I was fine here. I was totally exhilarated – and felt like crying, just like when I was in the boat under the cliffs around St. Kilda.  I felt as though I was an extra on a movie set, especially when I sat up front in the prow of the boat. Someone mentioned The Talented Mr Ripley – yep! We all had a drink and light snack outdoors and were serenaded by a local band. 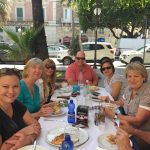 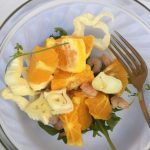 Back at the hotel we met up with a van that would take us on a two hour drive to the foothills of Mt Etna. I listened to Vivaldi on my headphones – the recorders concertos and the violin concerto in a minor. They seemed to fit this landscape. We were soon amidst the lava flows and the vegetation changed immediately. Now we were in pistachio and 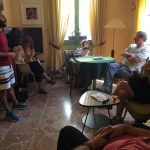 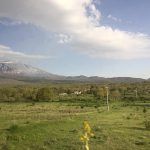 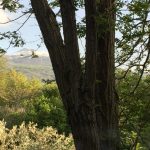 prickly pear country. There was snow on top of the volcano and all around us were wonderful displays of wild flowers. Just past the town of Bronte we came to the farmhouse where we were to have dinner and 8 and stay overnight. My room has a view of Mt Etna. How that? It was just after 6 when we arrived and we were in the best light of the day for taking photos so I threw down my bag and straight back out to explore the 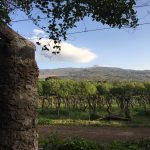 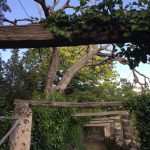 working farm. There were vineyards all around and several avenues covered in vines. A lava folly was in the middle of one vineyard. I mean, what else could you do with all the lava rocks when you cleared the field for planting other than build a three storey folly? There were horse, goats, sheep, three cats. The cats had the purr-fect sitting spots in the

courtyard. Someone drove into the courtyard and a big motorbike. The contrast between

the bright shiny bike and the rustic charm of the farm buildings was interesting. Some strange trees were covered in some sort of dense cobweb – how weird. The light, just

before sunset was golden and it was almost full moon too. The farm, the restaurant and 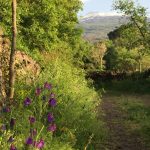 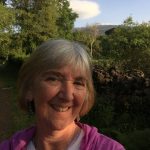 the rooms are all owned by the family. The dining room was covered in antiques associated with the wine industry and my room was filled with antique furnishings. I even had my portrait drawn by a local artist!

What a great place to stay! We were offered far too much food. In fact, Francesco asked for us not to be served some, but we got it anyway! As our group was leaving the restaurant at 10:30 (we’d been the only ones in for more of the time) the place was just beginning to fill up with customers. By the way. Our waiter was the spitting image of

Richard Ayoade – only Tristan knew who I was talking about. The conversations that evening were about families: buying children 3000+ square foot house, second homes were  beach houses on the lake etc. After dinner some of the guys went into the next room to play billiards but first they had to locate their balls. 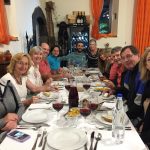 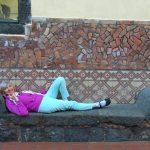 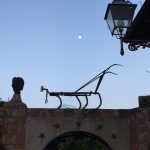