It’s 5:50 and I’m sitting in an outdoor bar in Ortega, the old town of Siracusa. Technically it is an island but the bridge is no longer than the bridge over the Rochdale canal in Hebden Bridge. From my spot I can see a few tourist boat and a liner out at sea. Out hotel, Hotel Posta, is centrally located. Here’s the view from my room:

We started the day by chocolate tasting in Modica. I can say that drinking warm liquid chocolate at 9:30 could be addictive. Modica is the centre of the chocolate making in Sicily. It has something to do with Aztecs developing the process and the Spanish bringing that art to Sicily, during one of the multitude of invasions that Sicily endured. We donned protective clothing and caps and were taken into the inner sanctum of the chocolate kitchen. We sampled lots of tiny chocolate chips. My favourite were the ones flavoured with ginger. I even learned that white chocolate isn’t chocolate at all. It’s condensed milk! We also sampled several different flavours of nougat – and crystallised orange peel. 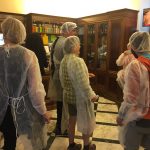 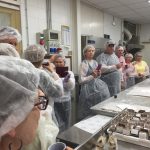 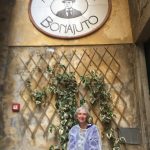 As we waited for the van to pick us up  I found a poster, smashed up pretty badly, but it

was a picture of Montalbano.

This glorious baroque town, rebuilt after the devastating earthquake of 1693 just like Ragusa, provides a backdrop of many of the street scenes. 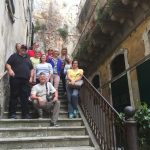 Scicli, our next stop, has a similar history and a similar connection to Montalbano. We were dropped off in the centre of town and given an hour to explore by ourselves. I headed upwards thinking I’d get a good view. There’s a lot about this place that reminds me of Hebden Bridge – old buildings clinging precariously to precipitous slopes. Just like 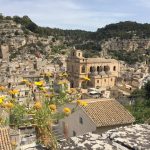 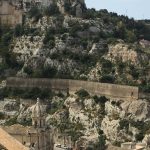 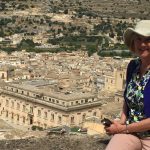 Hebden, too, there are lots of stairs to the top of the hill, but unlike Hebden, here there’s a church on top. What a climb for the people attending church. No wonder they can eat so much pasta and still look slim! At various intervals on the steep path I found elderly 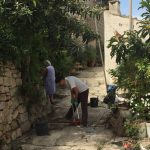 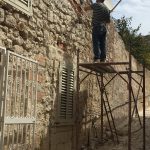 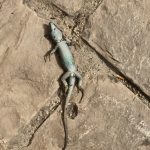 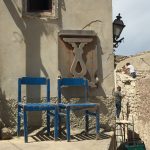 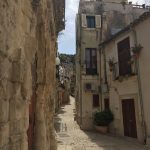 women gardening. it all looked very relaxed. Indeed, I think that’s one thing that I have noticed wherever I’ve gone in this country. Yes, there’s a lot of wild gesticulating but people appear relaxed and happy. I asked someone to take my photo with the lovely view into the town, and then I was joined by Sheryl  from our group and we wandered back into town together. 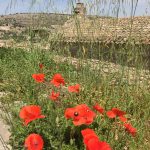 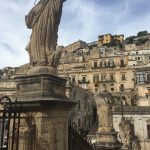 Next stop was cheese tasting at an eighty year old  farm that is run by one family – from feeding and milking the cows, to making the cheese, to serving delicious food. I was quite fascinated by the cheese making demonstration, especially when we were told that earlier in the day the milk was still inside the cows. We even got to try out hand at 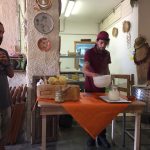 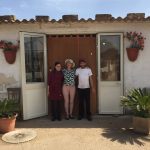 shaping the cheese. I made a treble clef (what else?). I couldn’t resist having my photo

taken with the owners saying “cheese!” While lunch was being prepared I wandered around the farm – donkeys, rabbits, chickens and ducks. The lunch we were served was the best of the trip in everyone’s estimation. I didn’t like the warm ricotta, served in a bowl with homemade bread, but the cheese plate and selections of salami, back bacon, sausage, salads, lemon desert, wine  and coffee were yummy. Before we left we watched the cows being herded along the road to the milking shed for their afternoon appointment. 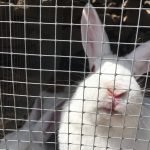 Back on the bus I think everyone except me fell asleep instantly, not waking up until we arrived in Siracusa. The entire town is a UNESCO site.

A side street – one of my favourite photos

We had an hour and a half to explore by ourselves before meeting for an evening drink. I went to explore the waterfront and found and old prison, boarded up, full of graffiti, looking like something from a movie set. No-one wanted dinner so we all headed out to a bar on the ocean from where there was a good view of the sunsetting, and we had drinks and appetisers. We even gate crashed another wedding! 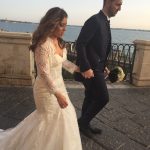 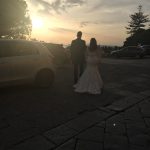 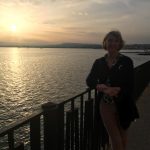 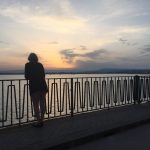