We boarded the  minibus to take us to Ragusa and set off at 10. We were scheduled to arrive there at 2 but it was 3 before we arrived in Ragusa, the town that provided the scenes for the fictional Vigata in the Montalbano books. It was Ragusa, therefore, that had inspired me to take this trip to Sicily. 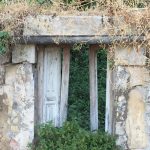 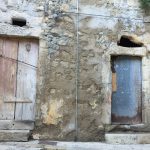 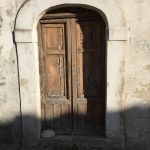 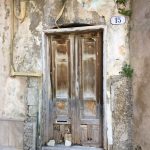 Our journey took us  through lush countryside covered in fruit trees. We could see the main motorway that crosses the island below us in the valley. For the most part it is a viaduct. Our journey, however, took us up and down the steep hills, criss crossing the 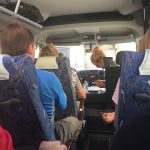 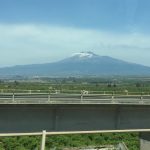 main valley. Was the motorway closed for construction? We arrived at the hotel Montreale which was in a newer section of the town, right across from the pst office which was adorned with enormous Communist era statues. Once there Alicia gathered us together  and told us that she was too traumatised to carry on as leader of the tour. She hadn’t managed to sleep since the tragedy.She introduced us to Francesco who would be taking over. She, however, would continue on the tour since she didn’t want to be alone, and public transport from this area was not easy. In fact, she stayed with our tour for the remainder of the trip. Francesco, 34, had visited 118 countries and taught in China, but only lasted a month. He’s worked for G adventures for 6 years it it was he who suggested that Alicia join the company. 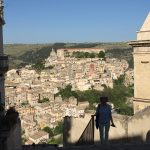 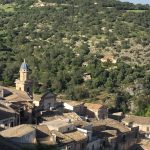 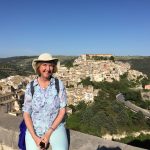 The old part of town, where the series was filmed is Ragusa Ibla and we were later that scheduled for our walk to the gardens there. We all walked down the 300 steps of the stairs leading to the old town, so familiar to me from the flat screen, and then hiked all the way up to the church at the top of the old town. And suddenly we found ourselves i the middle of a wedding. No, this wasn’t a film set, this was for real. Apparently it was a Bank Holiday and so that’s when people get married. A lot of tourists scrambled to get photos of the couple and guests, me included. 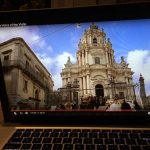 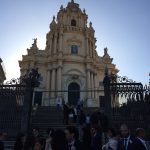 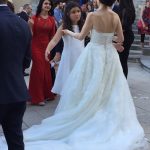 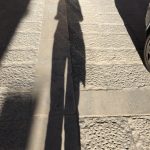 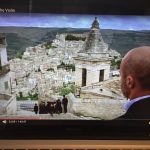 We wandered round the old town, seeing the church with the blue dome that features in the series and at 7 we went wine tasting. It involved one white, and one red wine with delicious salamis and cheese. We were told that Italians, or maybe I should say Sicilians, don’t drink alcohol without eating. I actually didn’t see a single drunk on the trip. Then I

ordered a salad with delicious lemon new potatoes. Must try to make those when i get home.  I left at 9:30 and went to look at the statues by the post office. Spooky, in an Eastern block sort of way. My evening ritual of charging my phone and my emergency charger was thwarted for the first time when I found that the plug that I’d bought at Manchester airport wouldn’t go into the socket. Strange. It had fit in all the other hotels. Trish lent me hers, so at least I could post my photos of the day on Facebook. 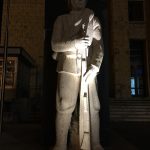 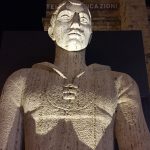 Posted my postcards in that post box. Let’s see how long they take to get to the U.S!