Ireland 5: inside and outside

I’m back in Hebden bridge now and I’ve just looked out of my window. It’s blowing a gale, it’s snowing like crazy and the weather forecast is for -10C overnight. That’s on a par with Ely and Truckee in the South West desert of America for goodness sake. I feel so incredibly fortunate with the weather I had in Ireland. The week before I travelled

Hebden Bridge and Dublin were snow-bound. In fact, I should have been going on my trip a week earlier but the band I’m in, the Halifax Concert Band, were recording a CD over the weekend and I wanted to participate. As it turned out the CD recording had to been postponed anyway because the recording engineer was stuck on the West of the Pennines and couldn’t get to Brighouse where we were going to be doing the recording. A couple of days before I left for Ireland the weather got a bit calmer and the snow finally cleared from both the streets in the valley and t’tops. But on the morning I left for Dublin I woke to yet another white landscape and I was only too glad that I’d booked a taxi to Hebden Bridge station even though it’s only about 6 minutes’ walk away from my

apartment. Landing at Dublin airport dirty grey snow piles as high as an airplane lined the sides of the runways showing how recently the airport had reopened for business. I’d packed my warmest clothes and didn’t feel cold on the trip despite the coastal winds that were in danger of blowing me over in several locations. The good news is that they were always on-shore winds, or the group wouldn’t have been able to do our hikes. Having arrived in Dublin mid afternoon I found my way to the hostel and realized that the hop-on hop-off bus was just about to finish for the night. If I hurried I could just catch the last bus leaving at 5, but I wouldn’t be able to hop off since there wouldn’t be another one to hop on! So I checked in to the hostel and 5 minutes later I was off to find the bus. 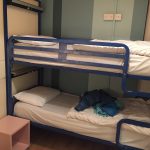 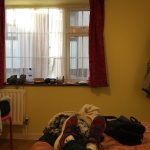 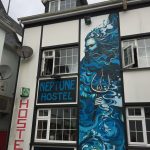 Now I haven’t done any hostelling for a long, long time. The last time I stayed in a Youth Hostel was when we travelled as a family and hiked some of the long distance coastal footpaths around Britain. Possibly the last time was when we hiked the Pembrokeshire coastal path. The hostels I stayed in in Ireland are not YHA hostels, they are just hostels for travellers and though most people staying in them are under the age of 30 since you

Each bunk had a light, sockets and phone charger.

can now book private rooms some families use them. In fact, on this trip I stayed in 4 different hostels, each in a private room with its own bathroom – pretty good, eh! I sat on the open upper deck for the 90 minute bus ride around the town. The downtown area of Dublin has major traffic congestion at the rush hour. I could have walked faster, but then, I didn’t actually have a destination. I was treated to a glorious sunset and ended up 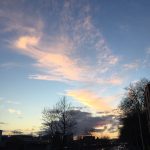 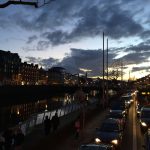 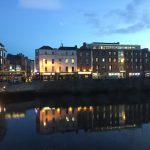 bobbing up and down out of my seat to take tons of photos, trying to capture the right moment for that great ‘sunset over the city’ photo. The next day I awoke to low clouds and drizzle, that sort of murky day when all you want to do is curl up on the sofa with a

Housing built for the Guiness employees in 1901

friendly kitty cat, but our destination, Killarney on the other side of the country, beckoned. Three brave souls opted for the afternoon’s kayaking excursion from which they returned shaking and shivering with cold despite their wetsuits. The rest of us 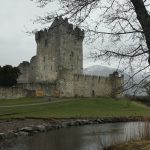 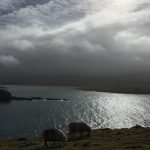 explored Ross castle that has been lovingly restored to its former glory with fully furnished rooms. The rain hadn’t stopped and low mist was swirling around the hilltops and it looked as though our planned hike tomorrow was going to be cancelled. The next morning the rain was only scattered showers but the clouds and mist were very low and there wouldn’t be any point in hiking to the top of the hill since the whole point was to get a view of the coastal cliffs and the islands. But just as we arrived at our destination one big black cloud suddenly cleared away from the sun and we found ourselves in bright sunshine – and my sunglasses were packed in my suitcase, dammit. The Bray 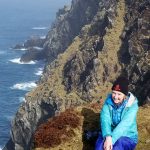 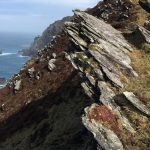 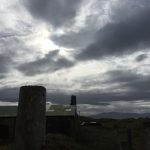 Head Loop hike was only a couple of hours, a gentle incline which ended abruptly in sheer cliffs. I felt I was back on St Kilda. It was stunning. Parts of the path had become streams but wet feet didn’t deter us. In fact, the weather had become so clear that we were able to see the Skellig islands now a major set location in Star Wars: The Force Awakens. Just below and west of a tower, built by the English during the Napoleonic Wars but subsequently used in World War ll as a look out station, are the remains of the word EIRE written using stones in large letters to allow pilots during war times to identify the Irish coastline, a form of early GPS. J.B had each of us stand on one of the still visible stones.

By the time we were back in the bus the clouds had gathered but there was enough light for some good photos with dark foreboding skies above, especially at Muckross, where Queen Victoria stayed for a couple of nights as a guest of the local MP Henry Herbert, who wanted to make a grandiose impression on the queen. Meanwhile the queen’s ladies-in-waiting were taken to a viewing point that overlooks the lakes of Killarney. As a

result, it has henceforth been known as Ladies’ View, and though I saw it in the mist it was lovely. It was the queen’s visit that put Killarney on the tourist map for the first time and over 10,000 people attended a firework display in her honour and it was reported that there were 800 boats on the lake. But the poor MP bankrupted himself with his extravagance and was forced to sell Muckross House. 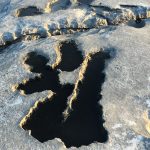 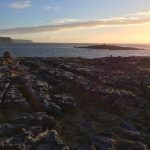 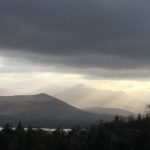