A couple of months ago I received an email from the Alumni dept at the University of Sheffield inviting me to participate in an alumni weekend of the music department. You could elect to be in the orchestra or the choir. Saturday was to be a day of rehearsals,and after another rehearsal on Sunday morning the joint forces of choir and orchestra would give a public concert in Firth hall, where I had performed when I was at university there. So I signed up to be in the choir.

Friday evening found me a little daunted by the whole event, but I understand that that’s how I always am before something new – whether it’s flying to Ireland,  giving a talk to 160 school children or running a choir rehearsal in Hebden Bridge. The weekend would require me to go to Sheffield by train, find Firth Hall using public transport, check in to an AirBnB, find the restaurant where all participants were invited to have dinner on Saturday evening, get back to Firth Hall for the Sunday morning rehearsal, find somewhere to have lunch and then get changed for the concert. I’d invited my brother-in-law and his wife who live close to Sheffield to come to the concert and have dinner after and they’d agreed to come.

Saturday morning was quite sunny and by the time I reached Sheffield it was a lovely day. I needed to travel very light since I realised there could possibly be a considerable amount of walking so the backpack that I won in Rachel’s raffle got to be used for its first outing. I was surprised to find that there are now trams connecting the railway station to the centre of the city so I jumped on one. I had clear memories of my first arrival in Sheffield at that very station as an 18 year old, but the station today  was unrecognisable from its 1970’s self – unsurprisingly. A helpful lady suggested M&S as being a handy place for lunch before I went up to campus for the first rehearsal. I got off the tram by the

cathedral and recognised the central part of the city. The place was full of construction, massive cranes dominating the skyline, and lots of new architecture all over town. Needing to stick to a schedule I made straight for M&S and found the upstairs cafe, and fortunately there was one window table available.

As I ate lunch I found myself compelled to write:

The Hole in the Road has gone

Eaten by piranhas she said.

Perched high amidst the pigeons I spy below

A moving Daffodil, with hands and feet,

Which sends my mind spinning

To my own Daffodil Lady – forever colourful.

She brought me here and returned to Affetside, alone.

What thoughts she had I never stopped to ask.Her pride, her one and only

Striding out uncertainly into a world beyond her scope.

I ride the tram, memories obscuring the present,

For now is a  time to sing, and remember with love.

I arrived at Firth Hall and was directed to the choir rehearsal room, where there was precisely one other person!!! Horror of horrors. Now I’m not a singer. I had merely signed up to be a member of the choir because I wanted to participate in the weekend’s event, which was in honour of Peter Cropper, founder of the Lindsay String Quartet, and whose vivid and charismatic playing I remembered so well. I’d presumed that there would be 50 or more singers, and I could hide and position myself next to a strong alto. I had been conscientiously practicing the alto part in Haydn’s HarmonieMasse all week, but even so . . . By the time the rehearsal, under the very capable, and always jovial George Nicholson, the choir was 15 strong. Golly, with just one more we could have been The Sheffield 16. I was SO glad I’d practiced!

After the rehearsal I went for a wander round Western Park, checked out the Arts Tower, the boating lake bordered by blooming crocuses and daffodils and then had a snack in the Museum cafe. I went back there the following day with a few other alumni and we all remarked that when we had been students we had never looked around  the park. As someone commented “We were too inward looking to be interested,” So true.

I had a couple of hours to spare before meeting the group at 8 downtown so on a whim I caught a #51 bus to Lodge Moor, a place a lived in for a while as a student. It’s perched high above the city, and there was still some snow remaining in sheltered nooks. Having spent 6 months living in Calderdale I found that I have no interest in living in the suburbs. The way of life seemed so isolated – you can’t walk to any  shops, or places of entertainment apart from a local pub. The Shiny Sheff is still there! The bus passed through Crosspool and even passed Selbourne Road where I lived for a while. It dawned on me that the hall of residence I’ll lived in was called Halifax Hall. How strange that I now live within a stone’s throw of Halifax!

I got off in the centre of Sheffield and explored the Peace Gardens and then found The Winter Gardens, a new(ish) indoor garden – quite wonderful. I rather liked the talking

Benches, which are specifically reserved for people who want to be talked to. Quite an innovation. I tried it out, but there were too few people around to find out whether it worked. The Peace Garden has a set of fountains – quite fun to play in  (with my camera!)

I checked into my AirB&B, a little out of the way, off London Road, but it was lovely, and my host had even been to Santa Cruz last summer! The stairs were amazingly steep, typical of Yorkshire terraced houses.

I got an Uber to and from Akbar’s restaurant in the centre of town. The downtown area was buzzing with people at 8 p.m. I’d like to spend more time looking around there.

Next morning I woke up to a totally blue sky shining through the skylight – something I don’t think I’ve see since November. The clocks had changed so I had to get a move on. My host had left breakfast for me on the table, telling be that the milk was in the fridge behind the cellar door – oooo. Spoooooky down there. 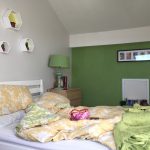 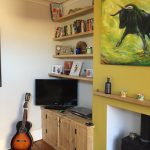 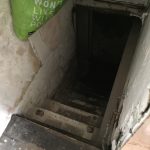 I decided to walk into the city centre in spite of that meaning carrying my backpack.  It was so warm that I didn’t need to wear hat or gloves. I passed through areas of new construction where I found myself completely alone on this Sunday morning, and at other times I was in the centre of areas that were just cafes upon cafes selling food from around the world including   ASalt n Battered fish and chip shop. A Sainsbury’s grocery store is an interesting building – once a cinema and later Tiffany’s Nightclub. 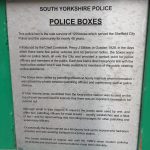 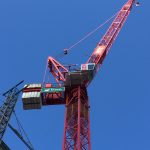 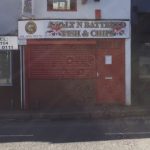 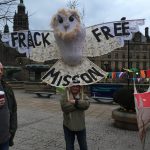 For the rehearsal we were joined by the orchestra in which the alumni were augmented by  students from Sheffield Music Academy that had been founded by Peter Cropper. Unfortunately the only person who graduated in my year didn’t show up but there was one other singer whose name I recalled, and I ended up having lunch in the museum with her and her husband. They live in Buxton, where I once won quite  big piano competition when I was a student in Sheffield, so I’d like to go back and visit sometime, and now I have a contact there. The choir and orchestra had come from all over England for this event.

My brother-in-law and his wife came to see the performance and then we went to a local Wetherspoons close to the University in the former home of a cutlery manufacturer with lovely grounds. 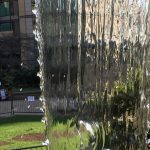 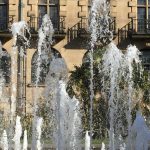 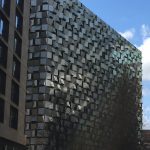 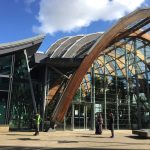 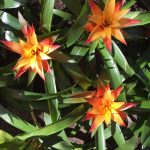 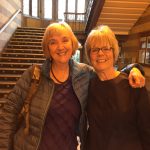 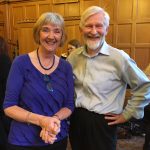 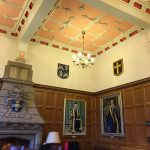 The performance! I’m just below the conductor’s left elbow.

Travel / Out and About, Writings & music

Ireland 5: inside and outside

My thoughts on my first 6 months in England after 32 years in the U.S.