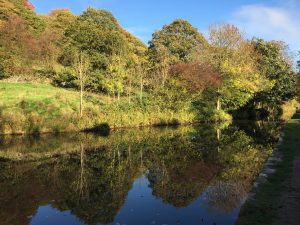 The canal between my apartment and Ted Hughes’s birthplace

Last weekend it was the Ted Hughes festival. I’d signed up to attend events on Friday, Saturday and Sunday. It was my twin daughters’ birthday too, and I thought this would be a good way to celebrate . . . . I’d purchased two tickets for the poetry reading on Friday evening but at the last minute the friend who was to attend with me couldn’t make it. I advertised the ticket on Hebden Bridge’s facebook and it was quickly purchased. The reading was to take place in Hope Chapel, literally the next building to where I live, and one that my Wrigley ancestors had had a hand in renovating – but that’s another story. I met my companion for the event on the steps of the chapel and we decided to sit on the balcony. The downstairs area was pretty full but there were only a dozen or so people upstairs to enjoy readings by Ted Hughes’s daughter, Frieda, and one of my favourite writers, Simon Armitage who I had met at Haworth Parsonage last year. Listen to Simon reading ‘Thankyou for Waiting’ with which he opened his reading.

Frieda was on first, introduced by a member of the Elmet Trust who demonstrated as much pizzazz at introducing the evening’s edification as the squashed spider outside my kitchen window. Luckily, my escort had a great sense of humour, and I related how, on attending a meeting with the Elmet Trust with Sarah I had been told to ‘wash out my mouth’ on mentioning something about the Bronte family (and it wasn’t said in jest!). 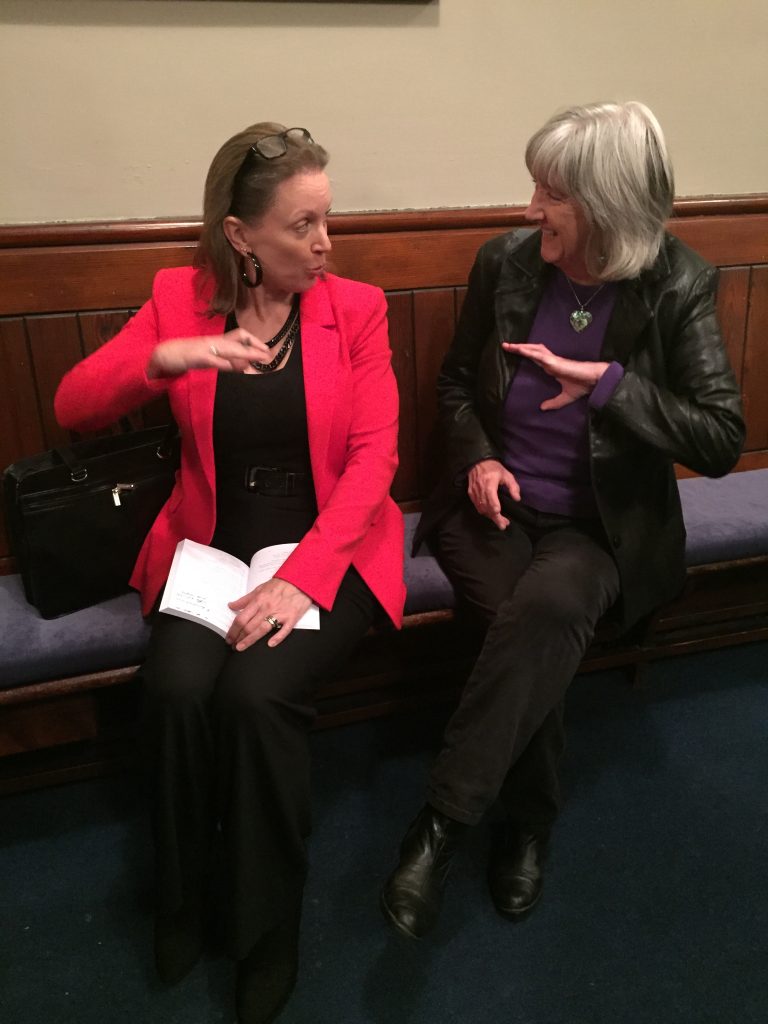 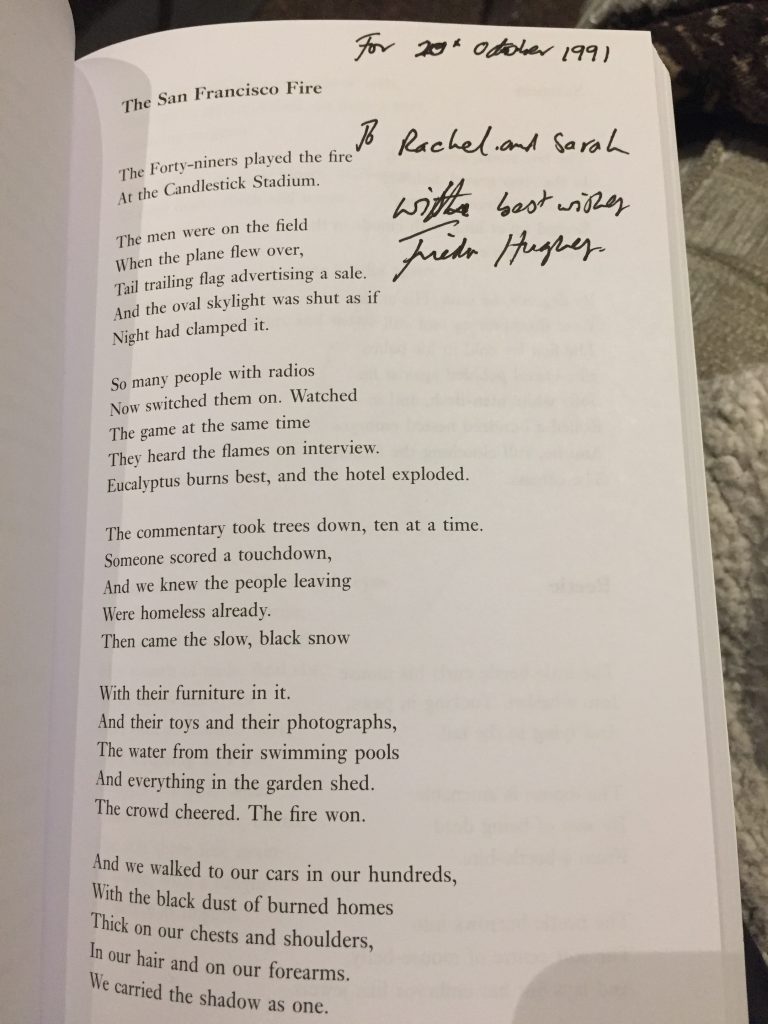 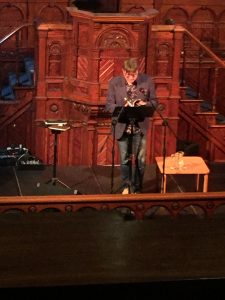 One poem that Frieda gave a special introduction to was ‘The San Francisco Fire’ which she commented that she still finds it difficult to read without a surfeit of emotion. The poem tells of her attending a 49ers game in San Francisco on the day of the Oakland  Fire, October 20th, 1991, and realising that, as the ash fell, she realised that many of the spectators would discover that their house had been burned down in the fire. It was highly significant day in my family too. It was Rachel and Sarah’s 6th birthday and we’d arranged for a magician to entertain at the party we were hosting that afternoon at our home in  Walnut Creek. During the morning, however, the house where the magician had been doing a similar party had had to be evacuated in the fire and his box of magic tricks had literally gone up in smoke – not a day to forget, though we were decidedly fortunate compared to many people. After the reading I asked Frieda to dedicate the poem to my daughters in honour of their birthday – the following day. Simon’s selection of poems was more upbeat than the ones he had chosen for the Haworth reading, and his super-droll reading of Poundland was hilarious. By the time I left I was animated and inspired by meeting and chatting to Frieda, the daughter of Sylvia Plath and Ted Hughes. She seemed very approachable and easy to talk to. 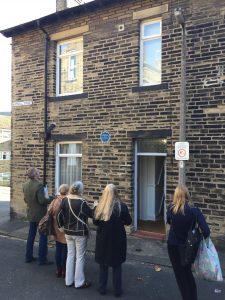 The following day I took a tour of Ted Hughes’s birthplace. It seemed pretty amazing to me that I could walk from my apartment to the house in Mytholmroyd where England’s poet laureate  (from 1984-his death in 1998) was born. I’d visited the house before but hadn’t been inside. In 2008  it was purchased and turned into a bed and breakfast. Rachel and I had thought about staying there a couple of years ago but we decided to stay in the Old Dairy in Heptonstall instead. Simon Armitage, as president of the Elmet Trust, had presided at the opening ceremony. This time I, along with 5 other ladies, got the whole tour of this tiny three storey house with outside ginnel, where next door’s washing was on the outside line. 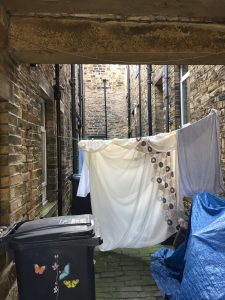 I found it rather uncanny to hear a recording of Hughes himself reading a poem about the room we were sitting in. We were able to see the view from his room of Scout Rock, and see the site of Zion chapel which dominated the street, cutting out all light from Ted’s window. 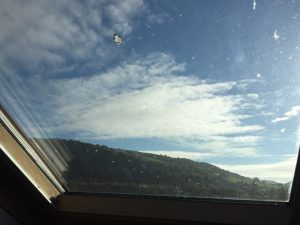 He lived there until he was 8. His father was a carpenter for a building company in Hebden Bridge. My ear perked up. Could he have worked for my Wrigley forefathers? They had the largest construction company in Hebden Bridge. I read  previously  that Ted’s mum was a Farrar from Heptontall. I too, have Farrar ancestors from Heptonstall! The visit made  me eager to read about Hughes’s life. His father had fought both at Ypres and Gallipolli and suffered from PTSD. The centenary of the end of WWl is coming up in November and there is a tremendous amount of work being done in Calderdale and beyond to commemorate the local  fallen soldiers. I have knitted scores of poppies which will be added thousands of others and form a perimeter to Lister Lane cemetery in Halifax. My own grandfather took his own life after returning from Belgium, when my mum was only 13. Giles Sunderland, one of my distant ancestors died in France in 1916. 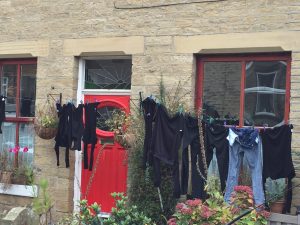 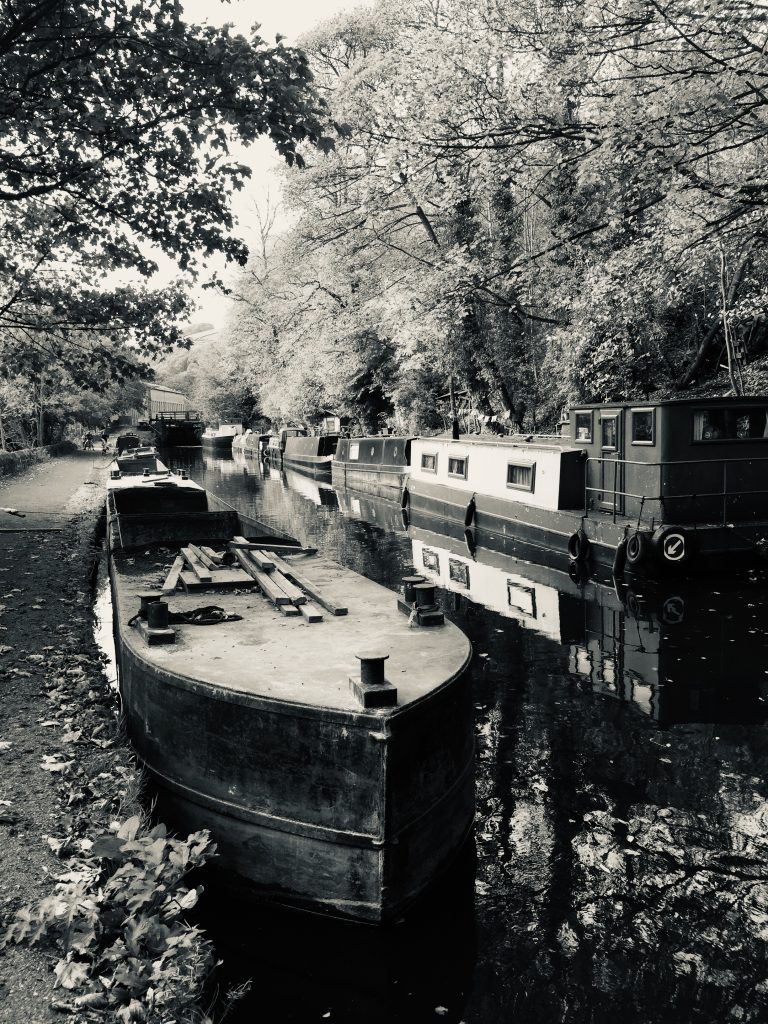 This looks as if it was taken years ago. The barge is currently being used for transporting stone for the renovation of the canal tow path. Mayroyd Mill is in the distance.

The next day had been forecast for rain but it was dry when I set off, again to Mytholmroyd, to take a guided tour of places that Ted Hughes wrote about in his poetry. The guides were two members of the Elmet Trust who Sarah and I had met before. It was advertised as a 4 hour walk, bring lunch and wear boots. That was about it. For the first hour and a half we strolled leisurely along the canal, seeing the imposing Southside house where one of Ted’s uncles had lived, the spot where Ted and friends used to fish close to the long tunnel (where marks  showed where the horses’ ropes had worn away the stone), again visiting the house (just the downstairs) and the site of Zion chapel. At each stop our guides read excerpts from Ted’s poems and showed old photos about the particular places. One photo was a  class picture of Ted at Burnley Road junior school – built by my Wrigley ancestor yet again! 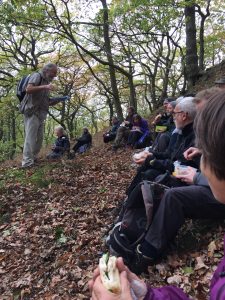 Then we headed up. Up. Up and more up – almost vertically through Red Acre wood where the site of Ted’s various camping trips were pointed out to us. It had begun the drizzle slightly, but I found this sort of weather much more evocative than had it been a bright sunny day. But . .  . and this is where I feel the guides needed some guidance. They set a very, very fast pace up the hillside, stopping for our lunch break with a great view of  Mytholmroyd sewage works! 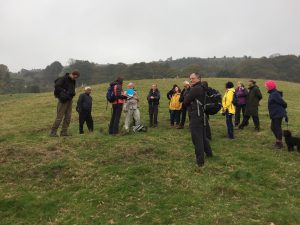 There seemed little regard for the pace of the group, and it was virtually impossible to stop to take photos. I inquired how much further to walk, how much longer the walk would last for. Neither question could be answered by the ‘sweeper’ and the guides were mere specs in the distance a hundred feet above us. This was the point of no return so, with a rehearsal back in Hebden looming, I headed back down to the valley. I arrived back ten minutes before the planned finish time of the guided hike. I wonder what time the rest of the group got back! 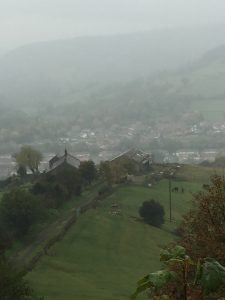 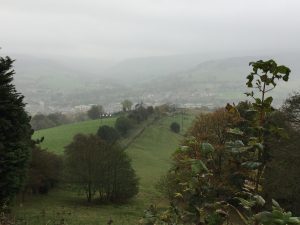 Three days later I went into my favourite quilting supply store in Halifax. I got chatting to the assistant about a project I’m working on – Hardcastle Crags. “Ah, I live close by,” she said, “in Heptonstall.” We swapped stories and business cards! She and her brother used to take things to be repaired by a clogger who lived at Lily Hall in the mid to late 1960’s. She used to swim in the mill pond at Hardcastle Crags – where, according to an article in the newspaper,  a former young resident of Lily Hall had drowned. And then she said “And I went to school with Frieda Hughes.” She described how they would make cardboard swords together and pretend to be pirates. Her parents (or grandparents had also known the Hughes family in Mexborough, where they moved to when Ted was 8). Ted wrote two poems about local Heptonstall characters, ‘Granny Riley’ and ‘Donald Straight Up’. The assistant has some family heirlooms given to her by the daughter of these two, and she intends to pass all this information on to Frieda, who might be unaware that these two were real Heptonstall village characters. 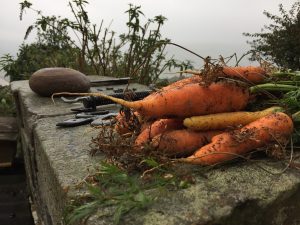 From the quilting store I went for a coffee to read the next chapter in the book I began reading this morning – Nimrod: the story of Ernest Shackleton’s Antarctic expedition. I’d visited a pub in Ireland lined with photos about his expedition. However, I’d never connected the name Shackleton with Yorkshire until the book recounted how, 4 generations before Ernest, the Shackletons had moved to Ireland from Yorkshire. When I explored Eastwood a couple of weeks ago I’d been given a tour of the little hamlet by John Shackleton. There’s a prominent hill above the Calder valley called Shackleton.  . .  . another connection that might provide interest on a dark damp evening in Hebden Bridge! 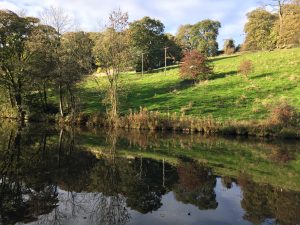 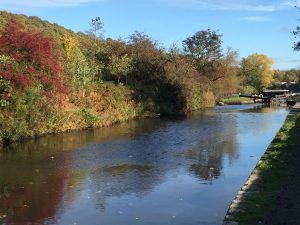 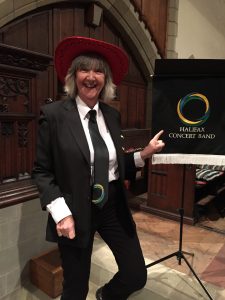