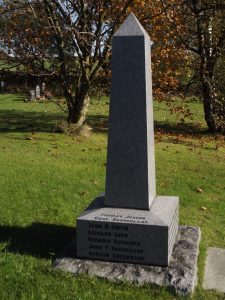 Another bright sunny day. As people greeted each other in the outdoor market in Hebden Bridge, the weather was their first topic of conversation. ” Eee, mustn’t grumble ’bout weather,” and “We don’t deserve this,” “Can’t believe it’s October. Feels more like’n summer.” 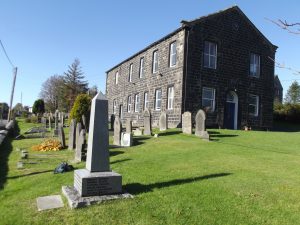 Spurred on by the aforementioned fine weather system currently hovering in the stratosphere above Calderdale I decided to go on what has become one of my favourite walks, meaning that you can do it on slippery leaves, and even in the snow. I got off the bus in Blackshaw Head, having passed the road to Hudson Mill where I was tramping around yesterday in search of Giles. today I was off to see another place where he had lived, Pry Farm. This is next to Scammerton farm, where he also lived, which I’d visited a couple of weeks ago, chatting to the current farmer who has been there since 1985. Just by the bus stop is Blackshaw head chapel, surrounded by the graveyard and as I looked towards it a memorial to local victims of WWl caught my eye. Now, I’ve been past this spot probably ten times before, but, today I was drawn to it. after all, Giles was killed in action in 1916, and he had lived just along Badger Lane from here. At first I thought the gate into the cemetery was locked but no, it was just on the latch. I headed over to the marble memorial which is about 6 feet high, and sure enough, there was the name of Giles Sunderland! As I stopped to take a photograph the gate opened and an elderly man approached me. “I always ‘ave a look ’round cemeteries when I guz past ’em.” Ah, I 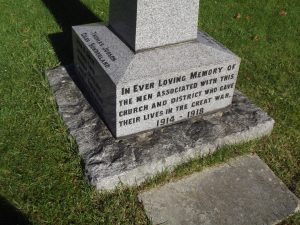 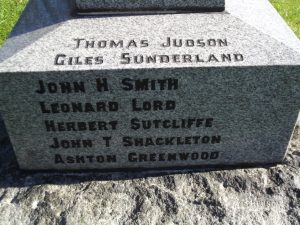 thought, a man after my own heart. We chatted happily in this remote spot. It was rather surreal. He organises weekend youth hostelling trips for the over 50’s and had just led a trip that included 3 nights at Haworth YH and three nights in Mankinholes YH. He’d led a walk up to Stoodley pike and the mist had been down and until they were within a couple of yards of the tower they couldn’t see it. Then the sun came out and they had perfect visibility for the rest of the day. Yes, I have ancestors buried at Mankinholes, and when my mum used to tell me tales of her youth hostelling days the strange name of Mankinholes always stuck with me. I’ll look into finding out more about the group. The next weekend is at Hathersage Youth Hostel. 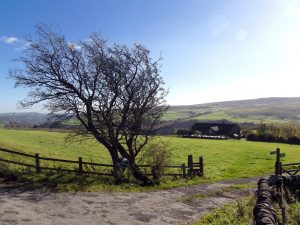 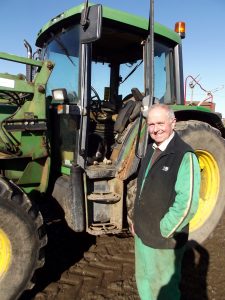 I passed Scammerton Farm where Giles had lived, and came to the next farm, Prye, where he was living before he deployed for the army. Just like Scammerton it’s set back off the road. In fact a farm track joins the two farms. I was debating with myself if I was going to be brave enough to knock at the door and introduce myself: “My ancestors lived here,” when I saw a tractor heading into the farmyard by way of another track. OK, here goes. I hope there are no vicious dogs. My path led to the back of the farm so I went around to the front and rang the doorbell in order not to surprise anyone. No answer so I headed for the tractor which had just parked. I introduced myself and had a lovely conversation with the current owner David Ingrams. He’s lived there for more 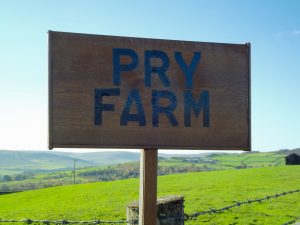 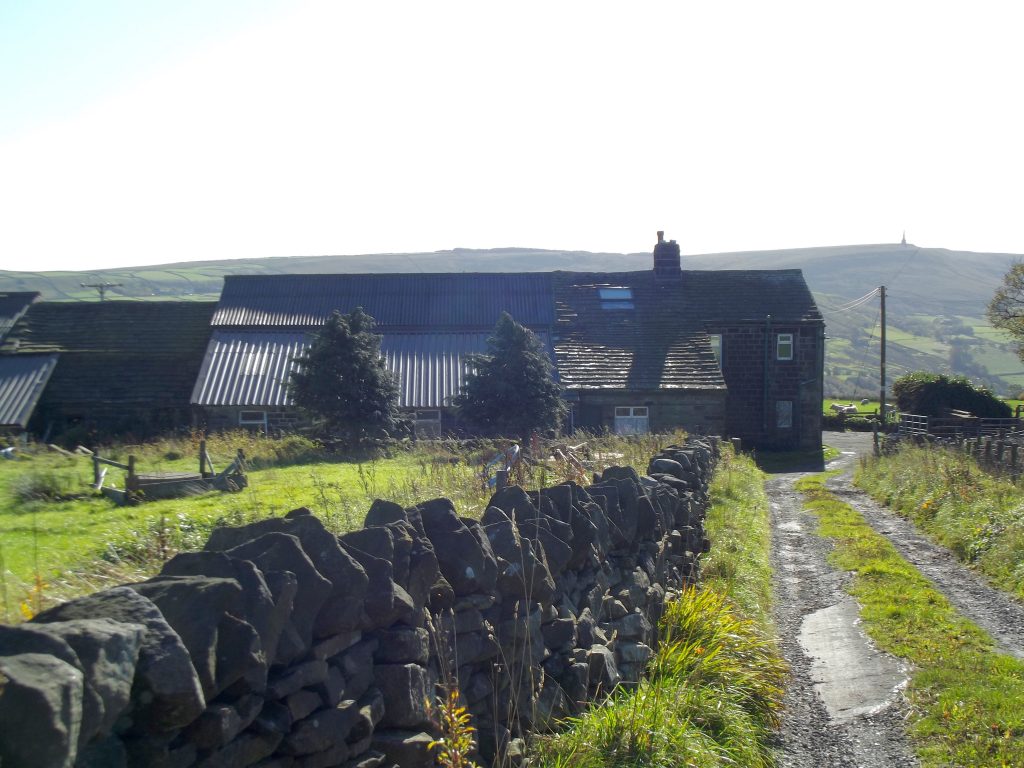 Pry Farm with Stoodley Pike in the distance 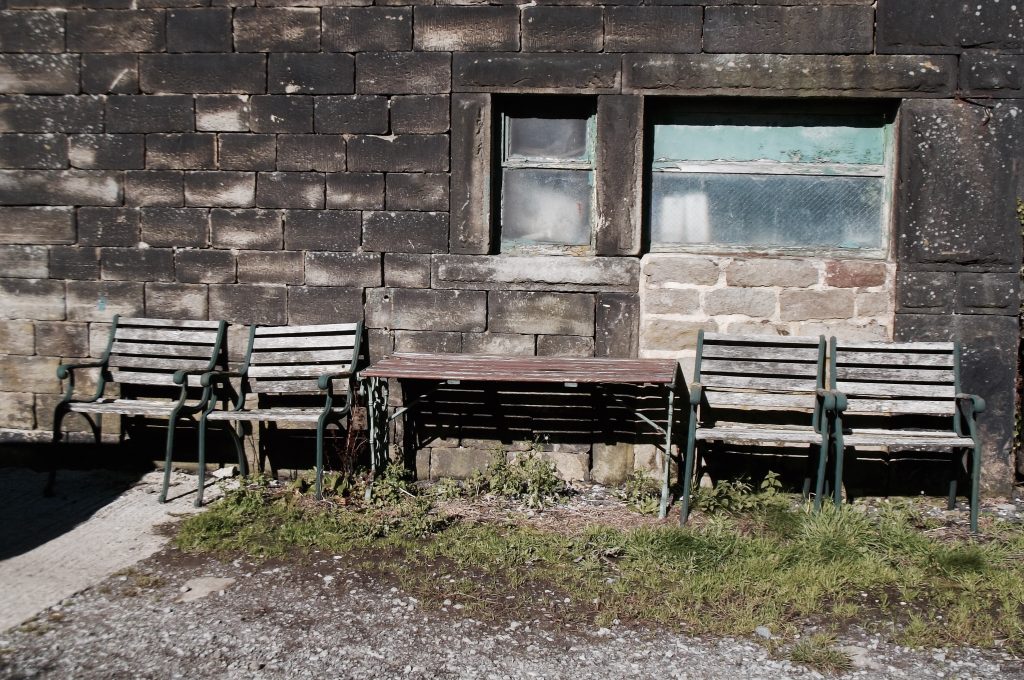 than 50 years, a few years before he married and then he’ll be celebrating his 50th wedding anniversary in January of next year. He jumped down from his tractor with great agility and introduced me to his beloved sheep dog who was eager to make friends with me. He also introduced me to two all white kittens, whose mother, apparently was totally black! His brother lives in the adjacent farm which I think must be High Rawtenstall. neither of his sons intend to take on the family business of cattle and sheep farming. I told him what I know about Giles Sunderland, and we discussed the fact that Hudson Mill is a short walk over Prye Hill from Prye farm, but considerably more by modern day roads. The layout of the farm and barn is almost identical to Scammerton. I need to see if I can find out the building’s history. 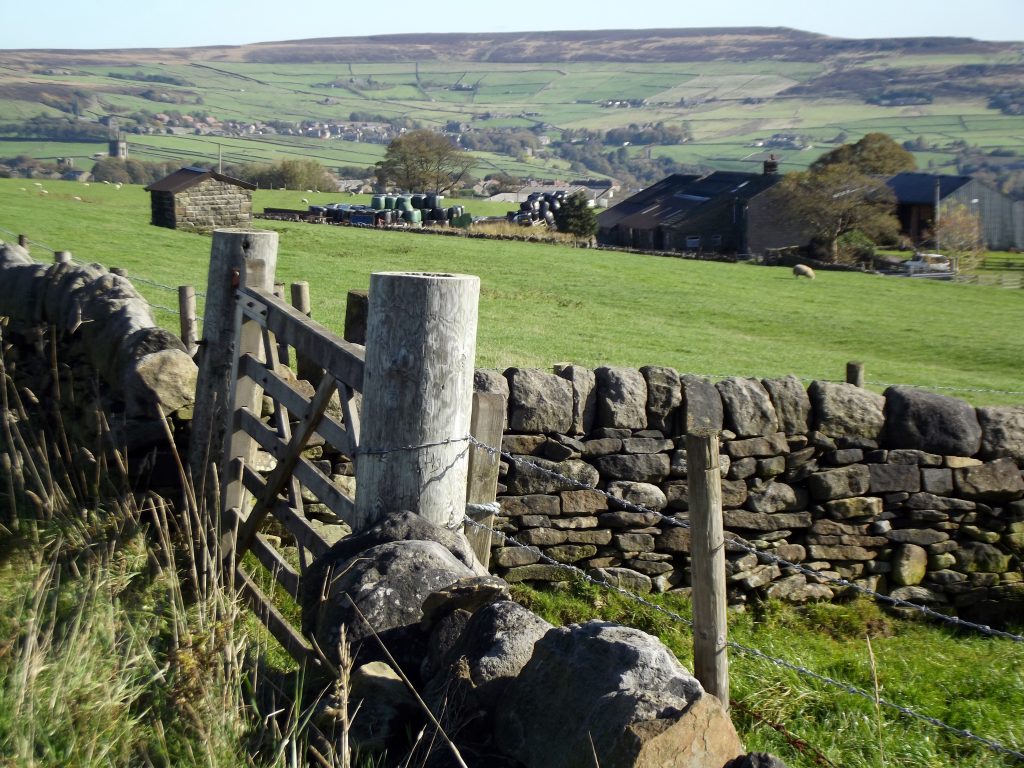 Approaching Pry Farm. Heptonstall church tower is on the left

Continuing on my way I passed sheep and cows on Prye Hill which must belong to David. I’d taken several photos of them on previous visits because there’s a sign which says Badger Field, and I thought that was quite funny! 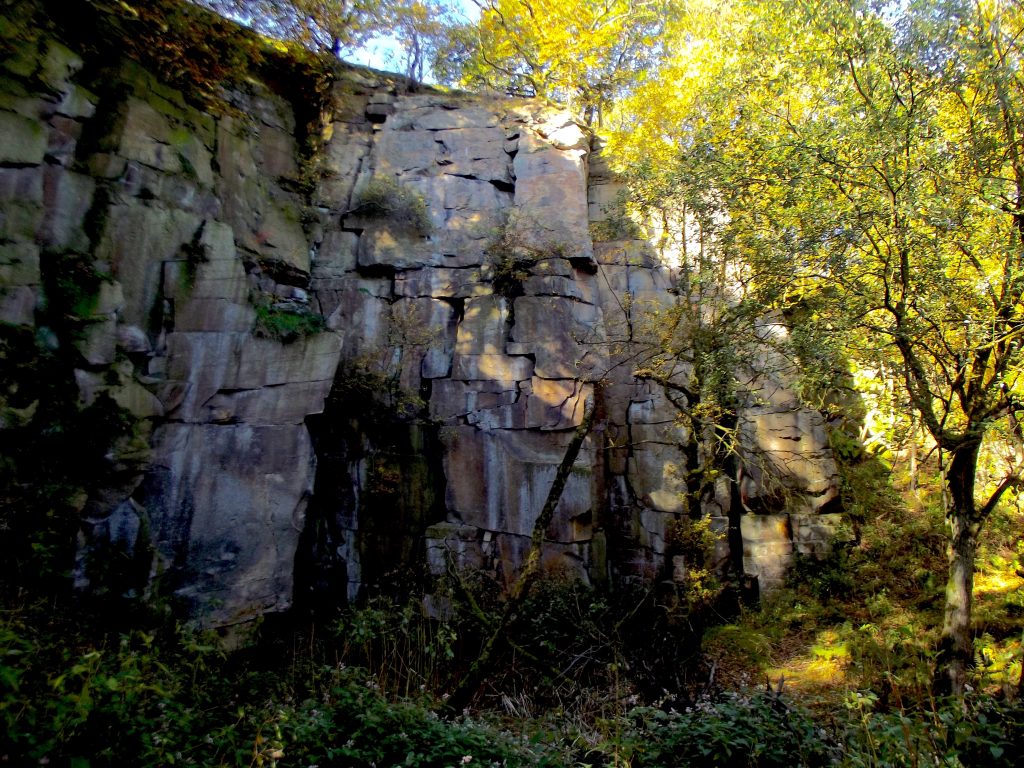 The road down from Blackshaw head is very, very steep. I passed a quarry where the light through the autumn leaves was beautiful. It is a remote spot and when a motorbike suddenly pulled in behind me I was quite startled. The guy got off, came over in my direction and asked me if I was taken photos of wildlife. He seemed to be a photographer too, lamenting the fact that he only had his compact camera with him.

Back down in Hebden I learned two new interesting facts on my weekly trip to the  market. First of all Paul, as in Paul’s fish truck, gets up at 2 a.m. 4 days a week to collect his fish in Fleetwood. it’s half term in the schools next week so he won’t be at the market so I had to double up on my order. His “bagger and money lady” wife wasn’t there. I asked after her and was told that she’d gone home at 10 a.m. because she was too cold. “She hadn’t checked the weather report,” he smiled. True. I’d definitely noted sections of hedgerow up ont’ tops that had obviously been frozen overnight. The butcher told me about his long walk of the Pennine way which he’s doing in stages at the weekends. Last weekend he walked the 41 miles from Edale to Hebden Bridge, 30 on Saturday and 11 on Sunday! 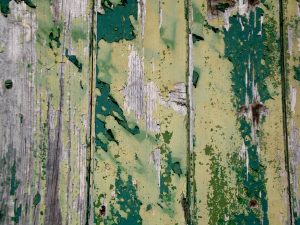 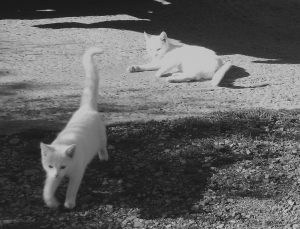 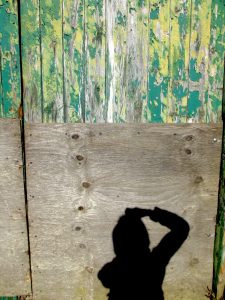