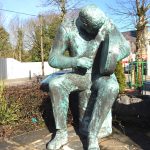 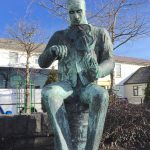 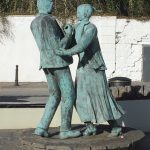 I can never say I’ve been a lover of traditional Irish music as a genre but I did intend on hearing some live music on my trip. Pretty well all the bars in the tourist towns advertised ‘live music’ at least a couple of nights per week but that didn’t necessarily mean traditional Irish music. The first I sampled was in a bar in Killarney. I’d arranged

to meet there with a couple of others from the tour but they were too Wet and Tired, as opposed to being Wild ‘n’ Happy and they had an early night, which meant that I was by myself, and looking round, I found that I was not only the only woman alone, but the only person alone in the bar. But, taking the bull by the horns, I sat at the bar with a good view of the corner where the three guys were playing. Within five minutes of beginning 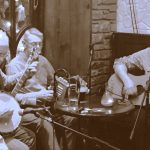 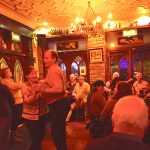 their set at 9 p.m. several people, regular, I would guess, had got up to dance. Perhaps it was a special event for Mothers’ Day. I took a few photos of the band, and me being me, a

Leaving the Killarney bar to a deserted street

few more photos of the people watching (!). It was pleasant but not particularly enthralling. In Doolin a group of us, under the guidance of J.B walked over a mile along an unlit road to a pub where a band was playing that he’d heard before. I didn’t know at the time that Doolin is famous as the capital of Irish music and each of the four pubs in 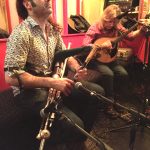 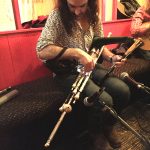 the little village feature traditional Irish music nightly. This was more like it. I was introduced to the Irish pipes player, Blackie O’Connell, and I was able to sit within an arm’s reach of him and got to see how this instrument works. With one arm you pump the bellows, with the other arm you squeeze the air bag, with the fingers of both hands

you play the chanter and with the palm of one hand you operate the drones – all the time tapping your foot noisily on the flag floor to add the percussion. I chatted to the performer. “How much does a set of Uilleann pipes cost?” He made my night when he answered, “How much is a car?”   ‘cause this is always the answer I give when someone asks me how much it costs to buy a piano. But his answer was that you can buy a set for €10,000 but his is a custom made set and cost €25,000. At least you can’t leave a piano behind in a bar – or a car! The second guy, Cyril O’Donoghue was playing a bouzouki, a guitar-like instrument originally from Greece. Unfortunately the third guy who regularly makes up Dubhlinn, playing the fiddle, wasn’t there. When I left at 11:30 they were still going strong. 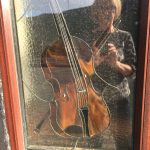 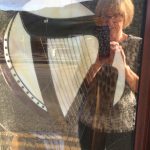 Reflections on the music of Doolin

You have the admire the tenacity of some of these musicians. As I was hiking at 45 degrees into the wind on the Cliffs of Moher I passed a guy perched on the cliff edge playing the pipes.

My hands were too cold to take his photo but I thought I’d have better luck on the way back, but by the time  returned he’d just packed up for the day and was wheeling his gear back down to the Visitors’ Centre.

And, below,  in Galway this street musician took my eye – he had some great moves, if nothing else!