A journey back in time

Perched on a hilltop, isolated from the ancient village of Sowerby lies Steep  Lane Chapel. Lies, is the wrong word. It clings to the hillside, shuddering and resisting the attempts by the buffeting gales to pitch it, hook, line and sinker, down into the valley below. This was my second visit to the chapel with the same two friends, both who grew up in Sowerby. Last time in the summer we braved a strong wind to walk to the chapel to see and brass band and partake in an amazing afternoon tea. This time it’s autumn and the misty drizzle  was swirling around t’tops as we battled again the northerly gusts, which seemed occasionally to be in danger of knocking us off our feet. I was reminded of the poem: “The north wind doth blow, and we shall have snow, and what will the robin do then, poor thing? He’ll sit in a barn and keep himself warm, and hide his head under his wing, Poor thing!” Today is Steep Lane Chapel’s Autumn Fayre and the promise of another afternoon tea was too tempting to refuse.

More chairs had to be brought into the room to provide seating for us. There was a formal opening to the event by the minister, and the man who lives in the manse, a hymn was sung “Love Diving, all loves excelling” with a lovely keyboard organ accompaniment and then the fayre was declare open. Suddenly the entire room sprung to tis collective feet and rushed en masse to the  cake and preserves stall, eager to buy the homemade produce before it all sold out. I found a fruit cake, which, at a pinch I could ice and use as a Christmas cake, a bowl with three hyacinth bulbs planted for Christmas flowering (obtained apparently from Gordon Rigg’s garden centre which I’d visited in Todmorden the previous) and a sleeping bag in readiness for Anna’s upcoming visit. After an hour the buying frenzy had subsided and the tables were cleared and reset with delicious homemade and baked foods. Yummy! The entire event took me back to my childhood – the hike through the windswept moorland, the howling and screeching of the trees swaying to their very roots, the shaking out of soaking raincoats before using them to adorn the backs of the chapel chairs, the warmth of the chapel and the lovely formality of the attendees attired in their Sunday best. If it had been filmed you would have sworn it was an early 60’s drama, complete with a China tea service with the name of a now-defunct chapel. Above the tables fading sepia photos of the chapel in its heyday with its ministers and congregation lined the walls, looking down approvingly on the day’s events. 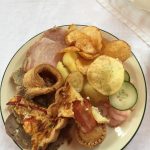 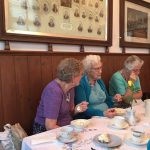 12 mile hike! From Hebden Bridge to Sowerby Bridge and back.