Circa 1900. Foster Mill, owned by Redman Bros, was part of the Hebden Estate Company. William Henry Cockroft designed the Methodist Chapel. Moss Lane on the hillside leads to Heptonstall Road. Top left is Cross Lanes Chapel with the Manse on the right. The group of houses, right of centre, is Slater Bank.
Both chapels and the mill all now demolished. 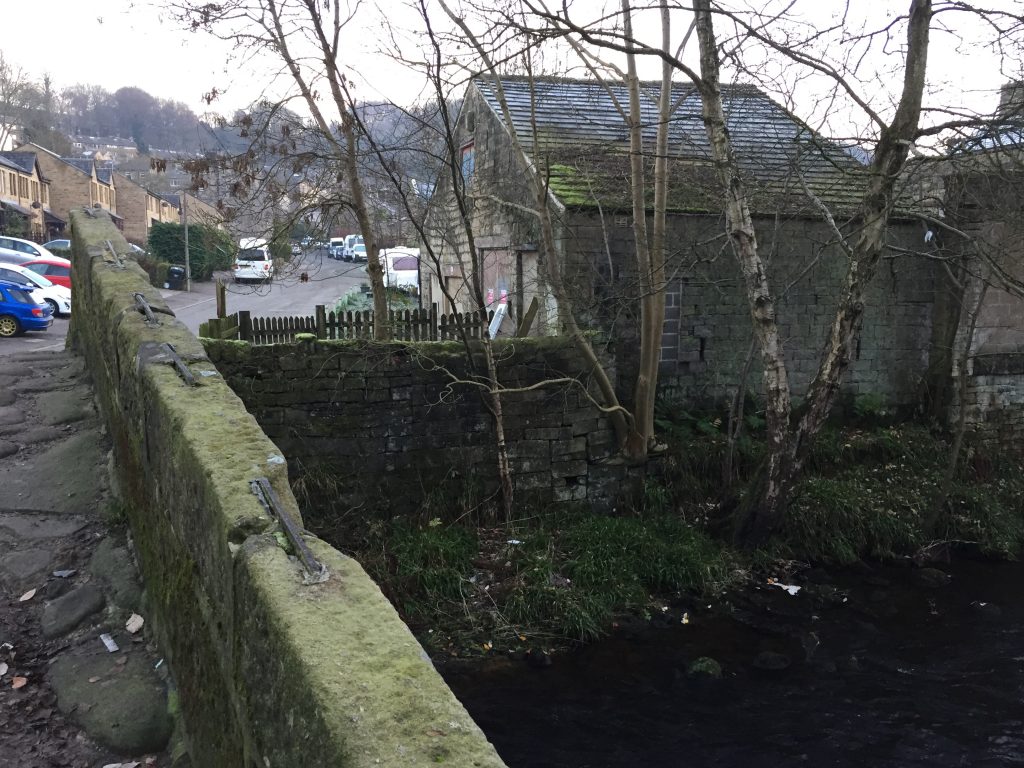 The building over the bridge was the stables for the mill 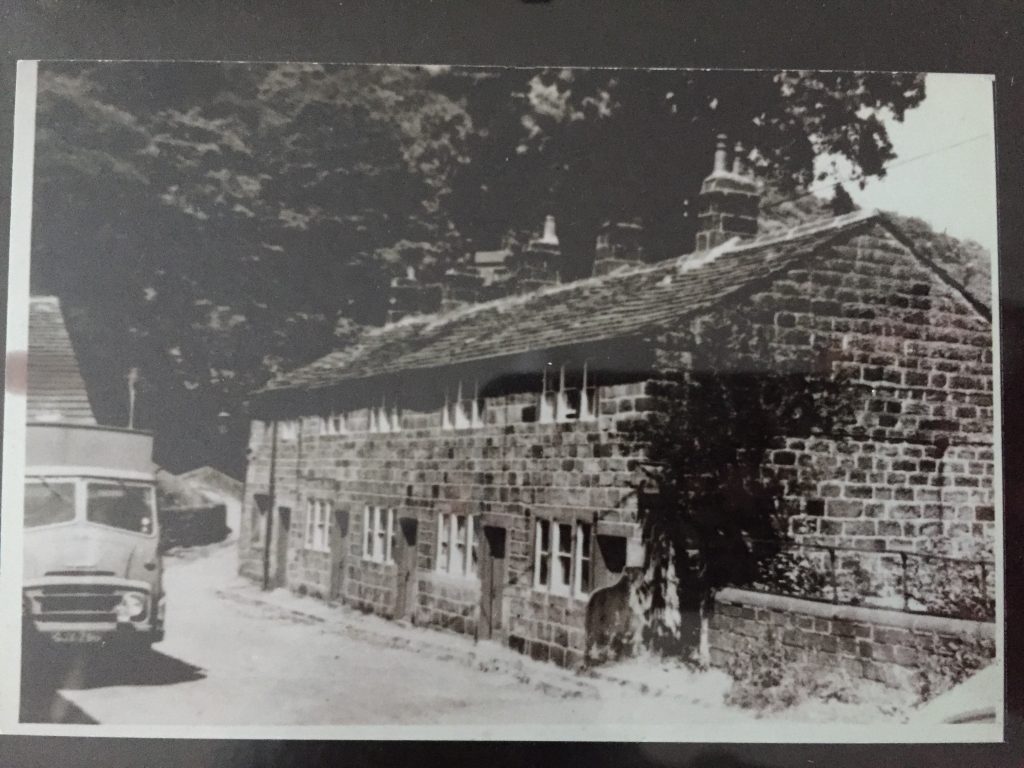 Photo of Foster mill cottages , and in the background the side of the stables and the bridge

Today, Dec 13, 2018, I’d planned to take a short stroll into Hardcastle Crags – mostly because it wasn’t raining and there was a hint of blue sky. I’d spent yesterday in the archives, the first time in 6 months. For the previous few days I’d been finding out interesting things from an interactive historic map of Calderdale and had come up with the idea of printing out a map and marking on all the houses in the area (basically the ones I could walk to from my apartment) that my ancestors had lived in, and those they had built. From this I’d discovered the whereabouts of Foster Mill. And wouldn’t you know it! It occupied the space on which a row of newish houses has been built, as far as I can tell the only new houses to have been built on flat land in Hebden Bridge since 1900. When Anna was here in May we’d gone to have a look at a house for sale on that very street – Spring Grove. Foster mill had been worked on extensively by my Wrigley builder ancestors. In 1842 the mill chimney had been plastered by Thos. Jas. & Geo Wrigley for Wilm & Jas Saga – 14.5 days work. 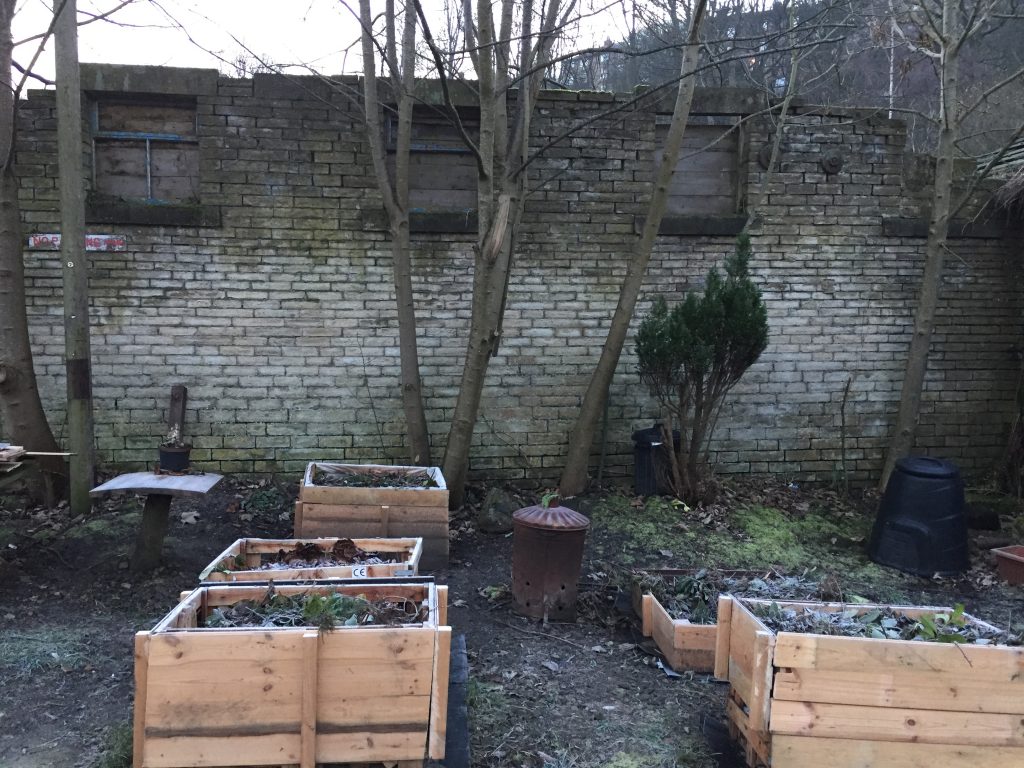 Bedding boxes form part of the Community garden. Was the building behind part of the Foster Mill complex?

In 1890 they had rebuilt the mill after a devastating fire and in 1908 Foster Mill shed and cottages had been painted outside. Only two days ago I’d gone out after a storm and taken photos of an old building close to the site of Foster Mill and had chatted to a guy who uses it to house a car repair business. I’d remarked on the number of quirky decorations on the buildings close by – very Hebden Bridge. So today, outside this old building a man was planting some bedding plants in some waste ground. On impulse Iasked if he knew if the building had once been connected with Foster Mill. “Perhaps,” he said. “That very old on the left, just before the bridge was the stables for the mill.” I’d taken several photos of that building since I’d moved to the town, simply because it had some great doors with flaking paint – one of my specialities. “There used to be a row of cottage where we’re standing. I have a photo of them. Would you like to come in and see it?” and with that he led the way over to one of the houses on Spring Grove. The photo was framed and on display in his living room. One of my ancestors lived in a cottage at Foster Mill. I wondered if it could have been one of these. I commented on his piano, where music for a Chopin Nocturne and the obligatory Fur Elise were on the music stand. I mentioned that I teach piano and we exchange info with the possibility of him taking lessons. It turned out that we had met once before in that connection when I was looking for a space to teach piano! 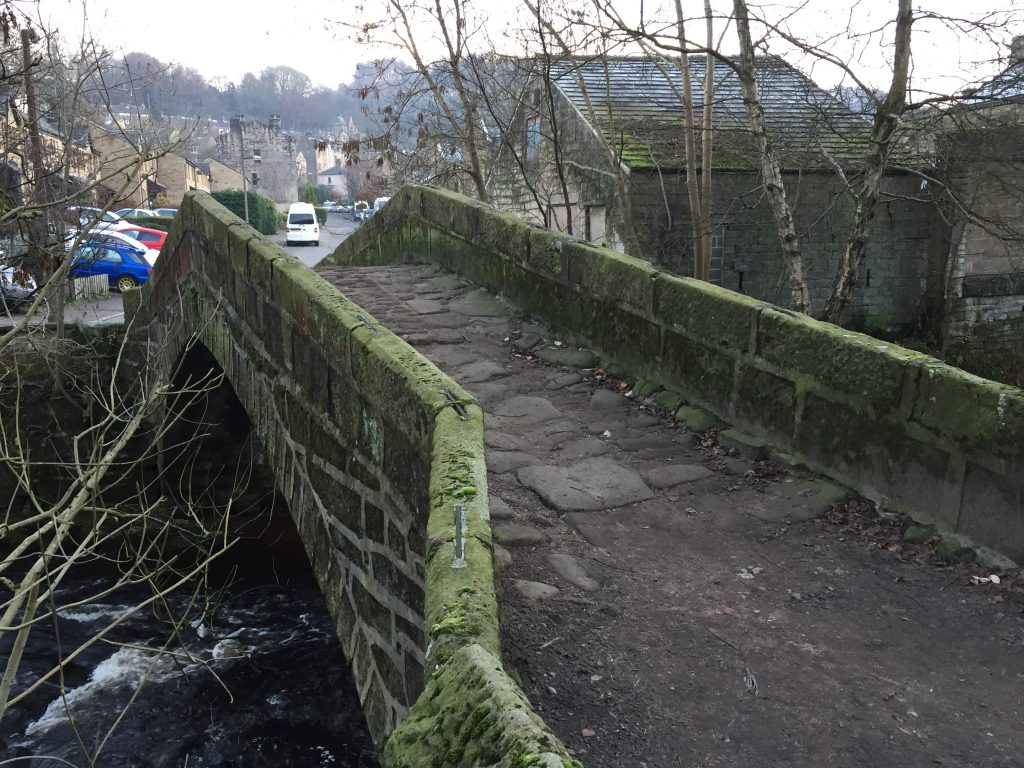 There was a corn mill, then a fulling mill [in the 17th century]. Around 1808, it was converted to a worsted spinning mill. In 1851, it was described as 6-storeys and was driven by an iron waterwheel 36 ft in diameter and 14½ ft wide, a 23 hp engine, and a 16 hp engine. The mill was destroyed by fire on 1st December 1828, 14th December 1853, and 17th May 1888 In 1888, it was one of the largest cotton spinning mills in the valley. After the fire, the mill was rebuilt by Redman Brothers. On 27th April 1891, photographs of the neighbourhood were taken from the top of 168-foot high chimney by R. S. Blackburn. The day was dull and the negatives not very clear. The building was demolished in 1985. The base of the mill chimney is still visible.

I took my leave of Mr ____ and carried on, over the bridge, which only this week I discovered is named Foster Mill Bridge. It’s similar to Hebden Bridge being very very steep, narrow, cobbled and with very low parapets. This was because the horses that used these Pack horse bridges were laden with bolts of woven fabric which clear the height of the parapets. It was built in the 17th century

Today, now that I knew its precise location, I could clearly make out Dog Bottom house and even see the progress of the stone wall since chatting with the mason two days ago. My friendly blue heron was nowhere to be seen today but I did take notice of a sign that I must have passed before. Well, I’d read it before but since I didn’t recognise the names of the places the sign mentioned, or the lay of the land in the vicinity, it hadn’t meant anything to me. Today I understood it all – yeah! Just another day of feeling connected to the landscape. 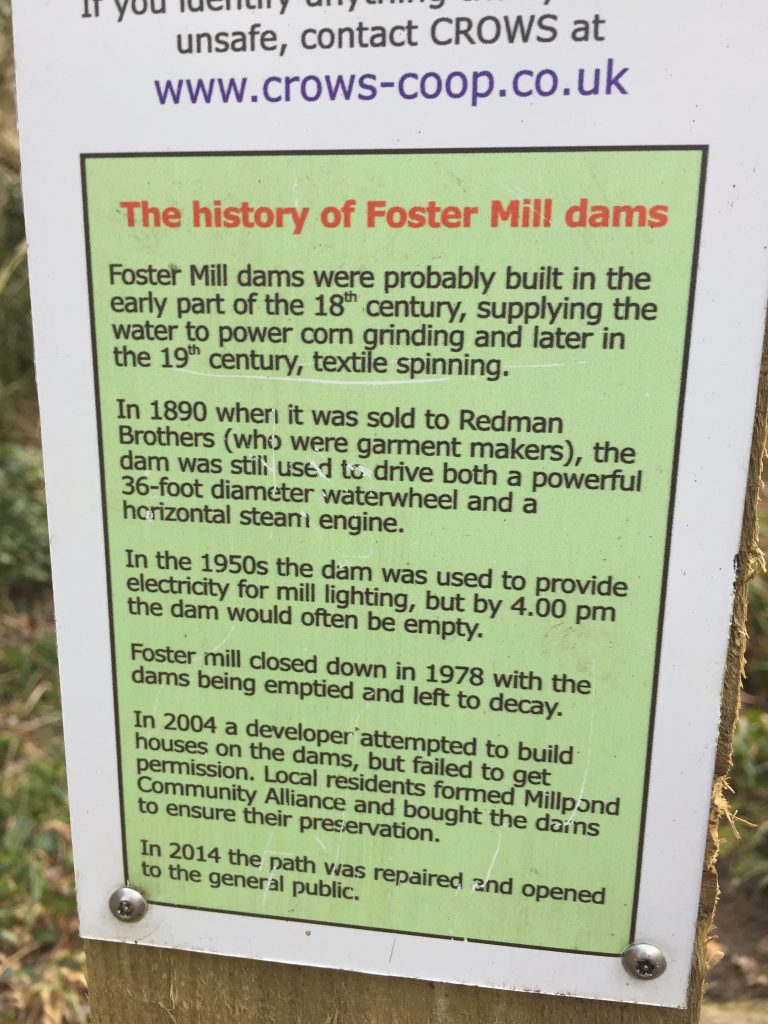