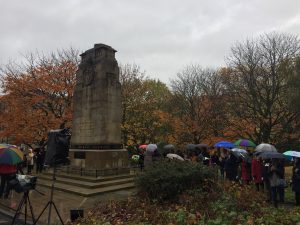 A multi-coloured caterpillar stands to attention

Its rain-booted feet silent and still.

Above it towers the church, proud of her coat of black grime

Threatening to overcome her once dominant position.

Rain pours from the sky and my eyes

As ‘Jerusalem’ resounds as if in irony –

Out of the rain now

Into the vast echo chamber punctuated with blood-red bullet points

As a thousand people gather to sing, to cry, to remember

Not just the fallen

But the damaged, in this, the war to end all wars.

And a rainbow arches through the sky

Coming to rest directly over the black tower

In the dark of the evening

A beacon is lit high on a remote hilltop

Here, handbells ring out from a tent

Where poppy quilts and paper gravestones bump elbows with

Outside, high above me, in a silent night

The spirits of the fallen soldiers

Shimmer in a cloudless sky,

Remembered but not forgotten. 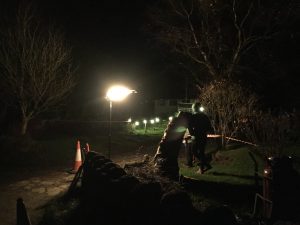 In honour of Giles Sunderland (1886-1916) a distant relative of mine, who lived in the village of Blackshaw Head, near Halifax, Yorkshire.

Another ancestor with ‘a story’ – George Gledhill

Thoughts in a Café