An ancestral distraction – or two! 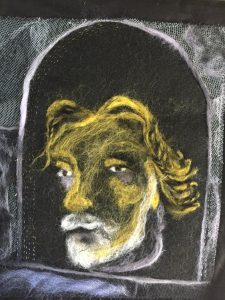 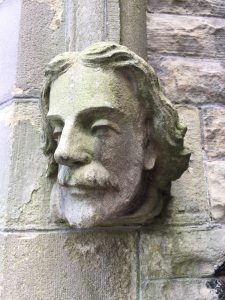 The gargoyle on Crossleys almshouses. I wonder if its a portrait of Joseph Crossley himself. 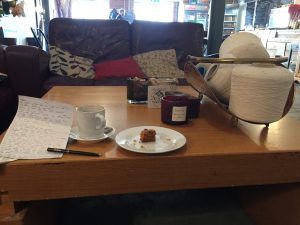 Cake and a cappuccino in the Loom Cafe 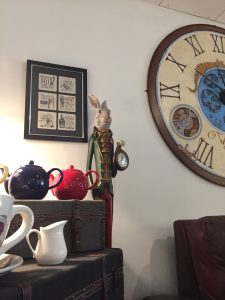 The Alice theme in the Loom Cafe 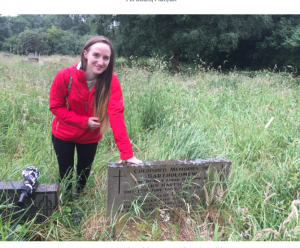 The first email I found in my inbox this morning was from .  . . .drum roll, please  . . .  none other than the first Wrigley relative I’ve been in contact with. She is the grand daughter of Willie Wrigley, the architect. How wonderful! I responded right away, despite this being – for me – an ungodly early hour! This immediately got me digging through previous emails, ones that I wasn’t sure I’d catalogued precisely and this led me on to Ishmael Nutton, my paternal grandmother’s brother. I have a very, very faint recollection of meeting him at my grandma’s on Thorns Road, Astley Bridge which is where the Denton family gatherings were always held. Ancestry provides ‘hints’ and one of the hints that popped up this morning was this:Here was the very document that showed that my great uncle actually worked at Crossley’s Carpets in Halifax, which was the largest carpet factory in the world. John Crossley built almshouses and a couple of weeks ago I’d visited them and taken a photo of an interesting gargoyle. Just last night I’d finished a felted fabric art piece I’d made from that photo! Back to Ishmael. He’d  been certified by the surgeon to be fit for work. The year was 1901 and he’d be 11 years old. I’d suspected that his sister Lily had worked there. Possibly I’d heard her mention it but for the last few years when I’d visited Calderdale with my daughters we’d usually visited the Dean Clough site which once used to employ 5000 people. Many of the individual mills have been revamped providing art galleries, a theatre, cafes, restaurants, even a cooking school – all of which I’d visited. And now, I find that my great uncle actually worked there. It looked bright and sunny outside with a thin film of frost on the roof tops. It’s half term this week which means my classes aren’t running so off I popped to Dean Clough, just to go and sit in the Loom cafe with its Alice in Wonderland theme, and taken photos of some of the views Ishmael may have known. 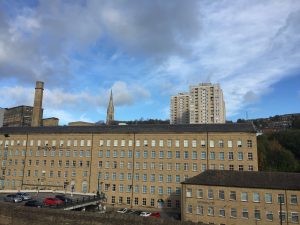 The tower block where Auntie Lil, Ishmael’s sister lived and the spire of All Soul’s where she is buried, with the mill complex in the foreground

In the first photo the original cobbled street leads to the mill complex. The spire of All Soul’s church towers above the blocks of flats. My Auntie Lil and her husband Bart lived in one of the flats and I visited her there. They are now buried in All Soul’s cemetery and Sarah and I managed to find their grave last summer, 2017. The mill complex is also the place where I bought my 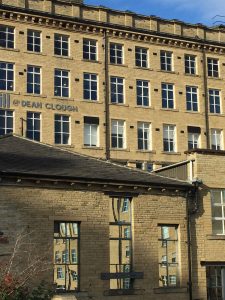 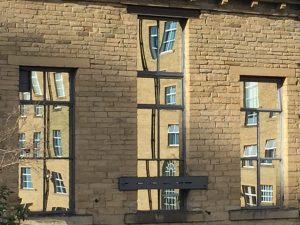 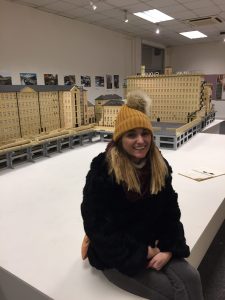 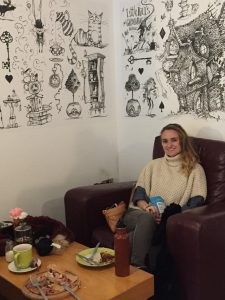 Anna in the Loom Cafe 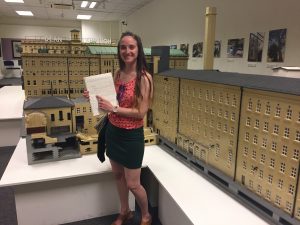 current digital piano from! I took a brief look in the book shop and found cards created by Valerie Wartelle. I did a day workshop about felted fabric with her in Hebden Bridge last winter. Through the Crossley Gallery to the Loom cafe where I was the only mid-morning customer –  a perfect place to collect my thoughts about Ishmael and others who had returned from WWl  but how their experiences had affected their lives and that of those close to them can only be imagined. Last  night I’d watch a rerun of one of the episodes from Blackadder set in the trenches, and in the Loom cafe I find fliers for the upcoming production next week in the Viaduct Theatre in the mill. Yes, you’ve guessed it. It’s Blackadder!

My Thoughts in a cafe

The White rabbit offers his pocket watch to me

As Alice looks on bemusedly

And jostles for air between  cake and cappuccino

Through a glass window, spotlessly clean, a crisp winter light pours in,

But, with eyes open, I dim this light, cloud the glass, drown the music,

And I’m in a dark forbidding place, a basement, where deafening thuds, piercing whistles and earth shaking stomps

Transport me to a former time.

Barely awake, barely cognizant of his surroundings where he is dwarfed

By buildings so tall the sun never reaches the ground

Even in those times when, just for a moment, it penetrates the ubiquitous smog and grime.

A surgeon signed his papers – he’s fit for work

But he doesn’t stay long, and next time I meet him he’s a gunner

Taking aim at other young men from factories and farms

And homes where anxious loved ones await them.

Ishmael returned home. Was he devastated?

Did he scream in nightmares in the living daylight?

In a gallery above me a striking wreath takes my breath away.

The dead eyes covered with pennies,

The kit box stencilled with numbers 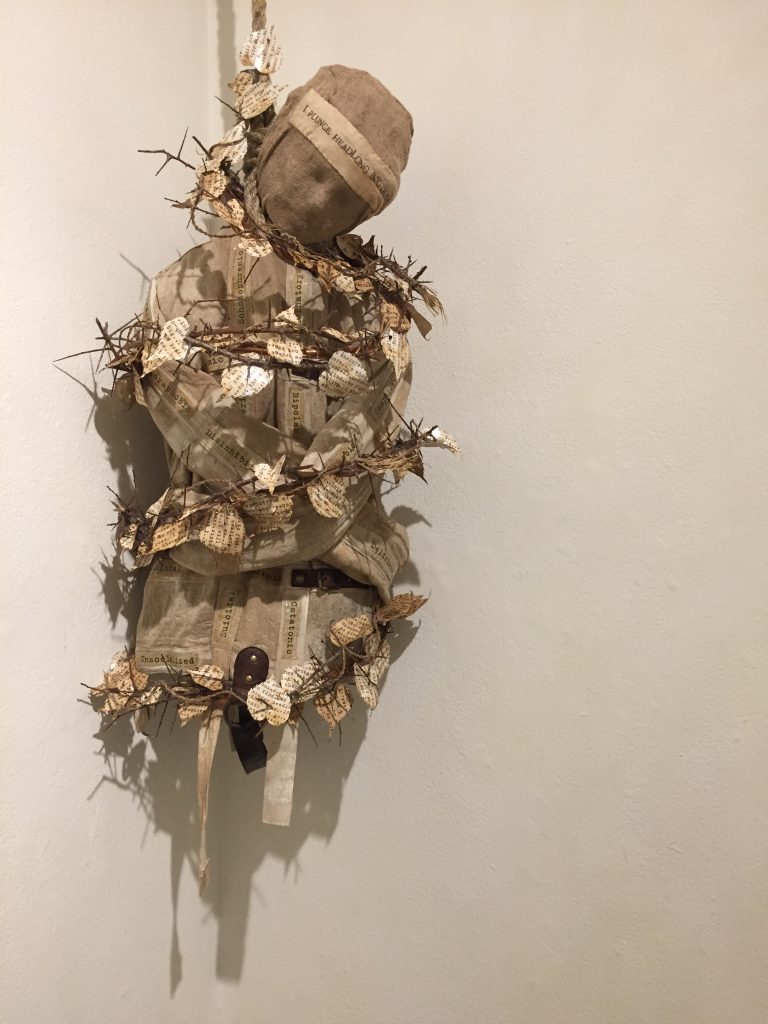 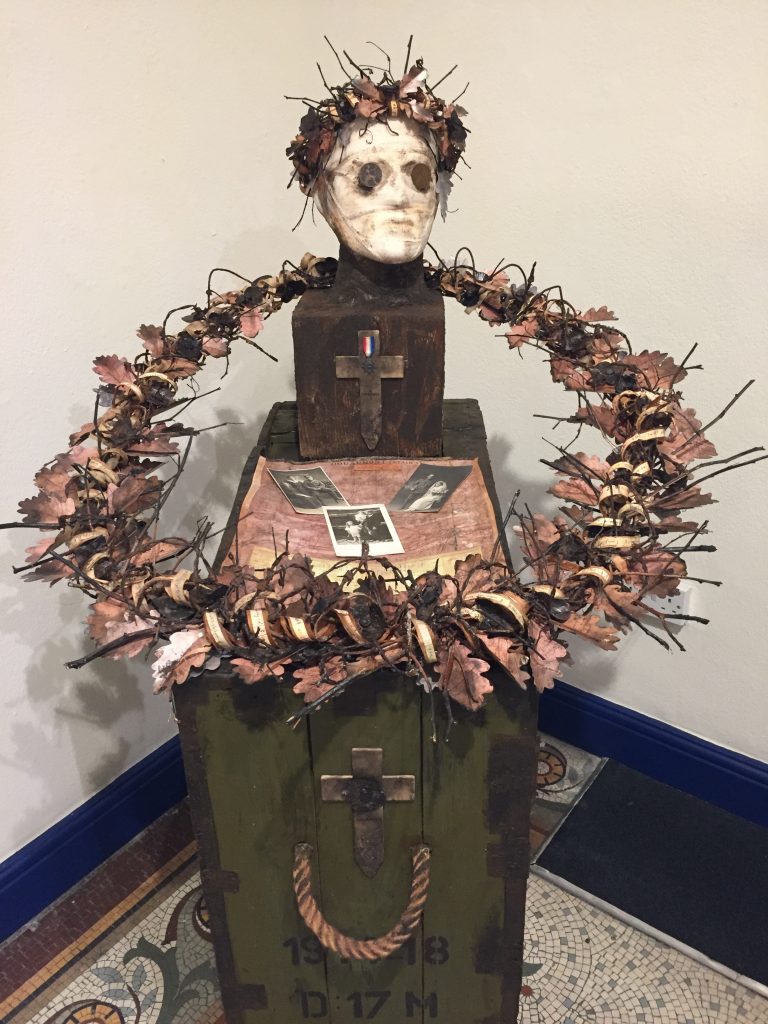 After my cappuccino and cake I wandered around the galleries for a while and my eye was taken by a new exhibit. Well, that’s a mild way of putting it. I was stunned by it. The subject was wreaths, which, in my books, didn’t sound too interesting, but these celebrated the living, the dead, the lost. One included display included objects that mothers attached to babies they left on charity doorsteps. Another was a wreath wrapped around a hanged man. The one that took my attention was one about a fallen soldier, including family photos, and old pennies to close his eyes. The kit box supporting him listed the number of people killed and wounded in WWl. 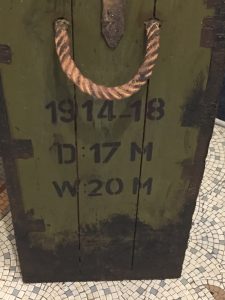 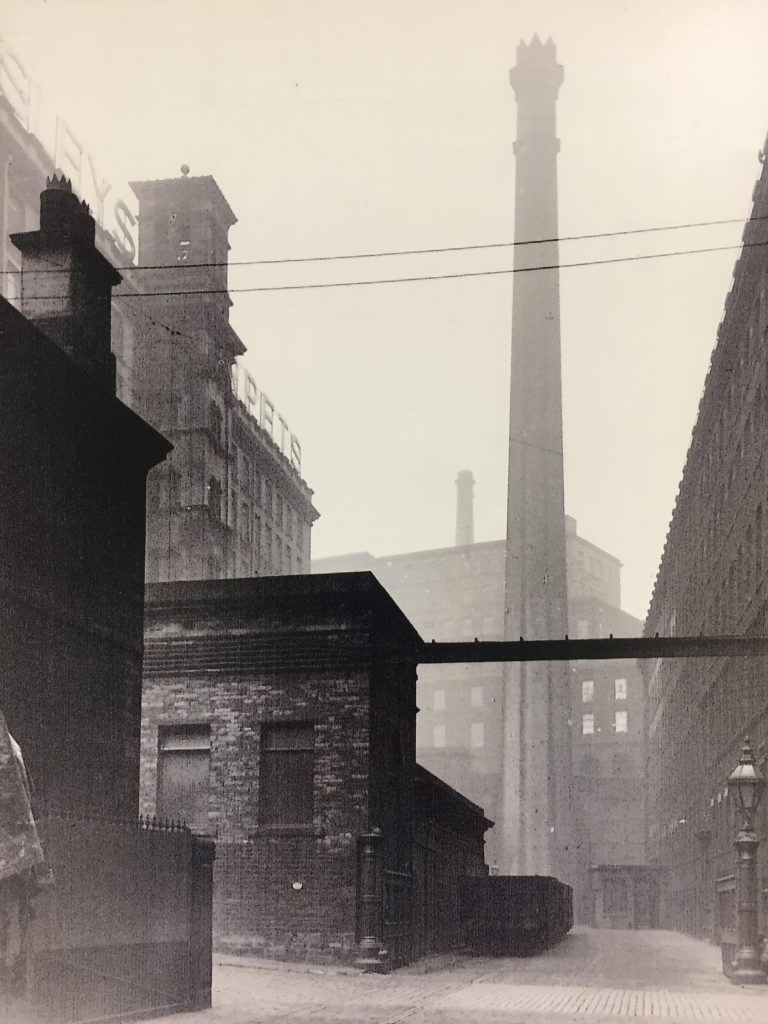 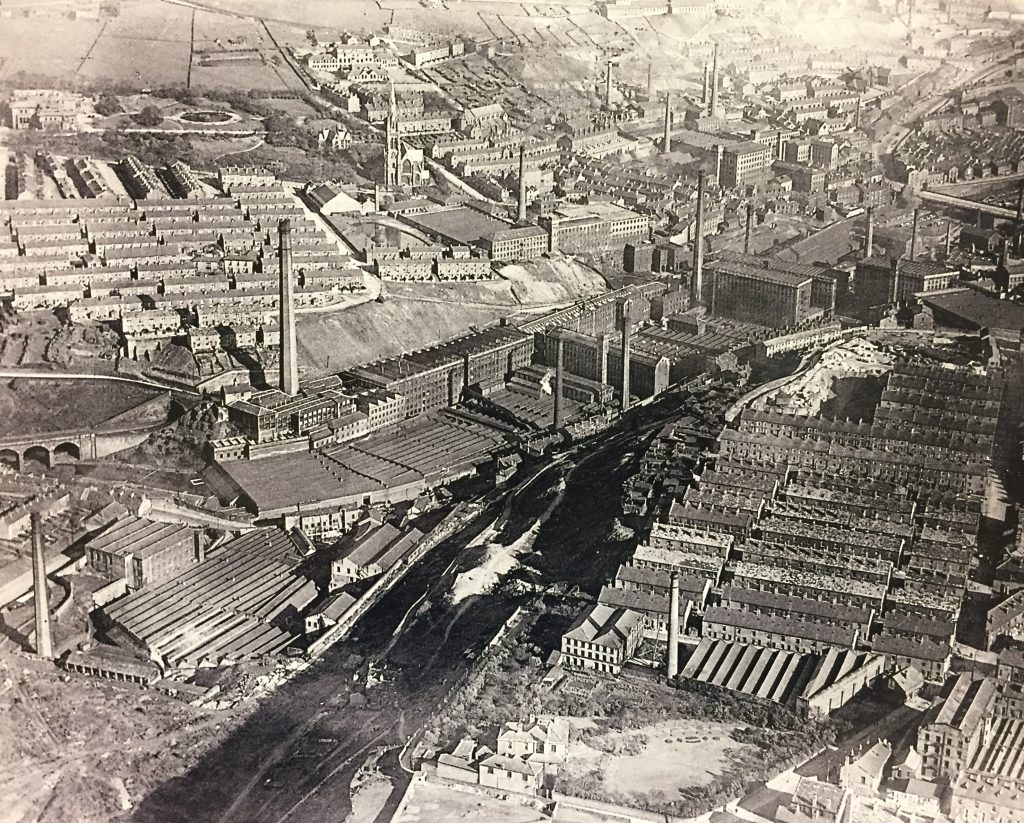 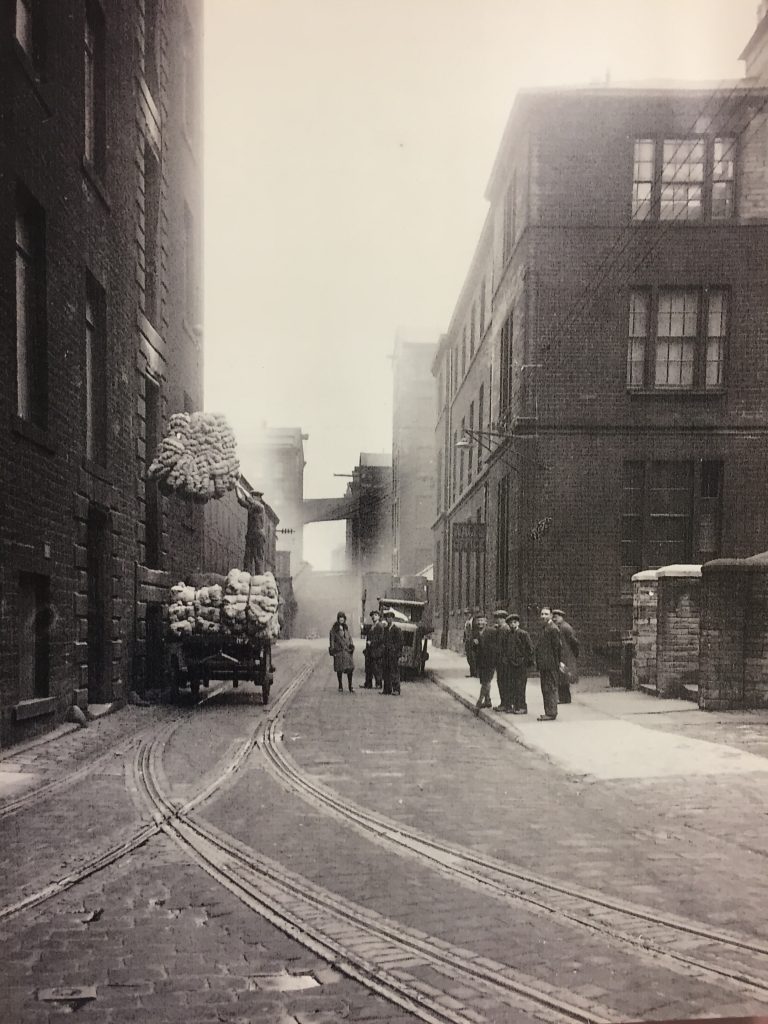 Another ancestor with ‘a story’ – George Gledhill