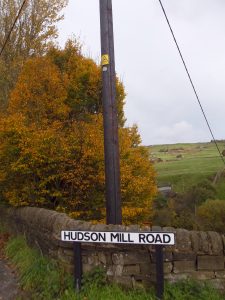 Giles Sunderland (uncle of wife of my 3rd cousin 2x removed)  and his family were living in a house at Hudson Mill in 1910. So yesterday I set off to discover it. I got the Blackshaw Head bus to Jack Bridge on a lovely sunny Autumn morning, I’d passed through this little hamlet several times before, both on the bus and in the car when my daughters had visited, and in fact, I’d walked up the Colden Valley to the bridge in 2016, little guessing that I would one day be able to walk to this beautiful spot from my living room! The bridge itself is very narrow. the bus only just fits over it. There are steep, well worn steps to one side and a cat was happily sitting and lazily drinking from various puddles. 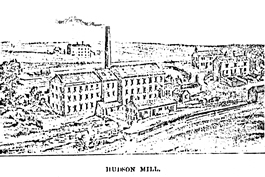 Hudson Mill road is just past the bridge and I’d been told by several people that at one time, not so long ago, cars could negotiate it, but now it’s closed to cars, but makes an easy footpath. The road past the mill was closed to traffic in January 1911. Hudson Mill itself closed in about 1908. With the Colden river on my left the path clung to the valley side and soon I came to a building that was obviously once part of Hudson Mill. 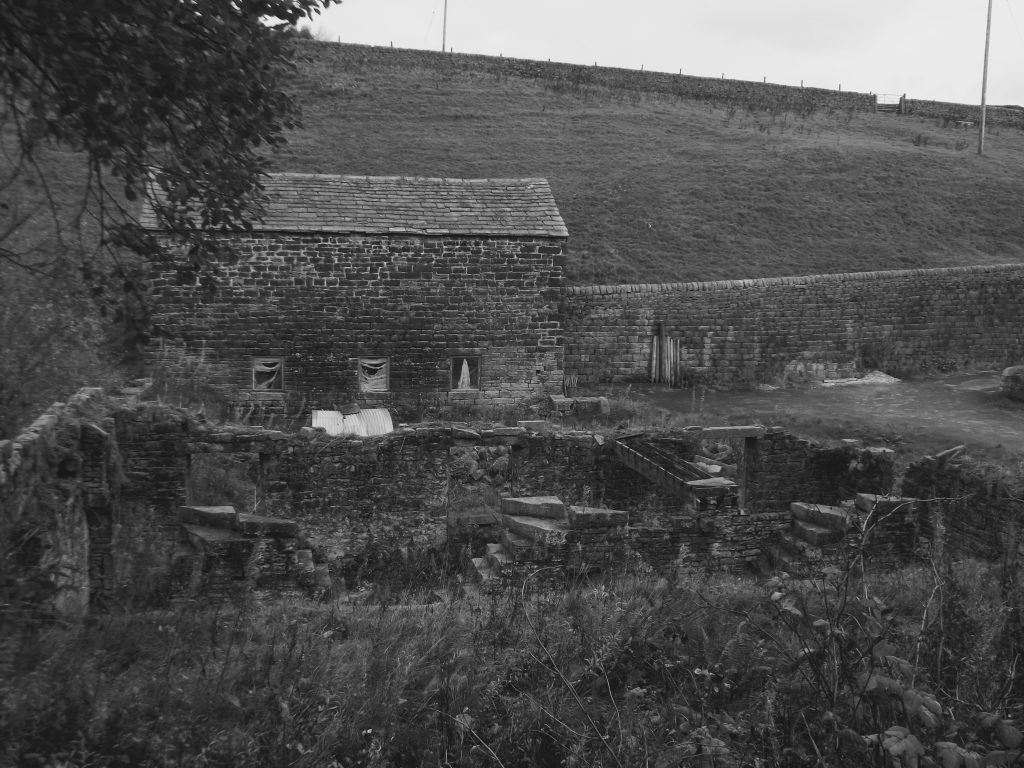 Remains of 6 cottages and the barn/stables 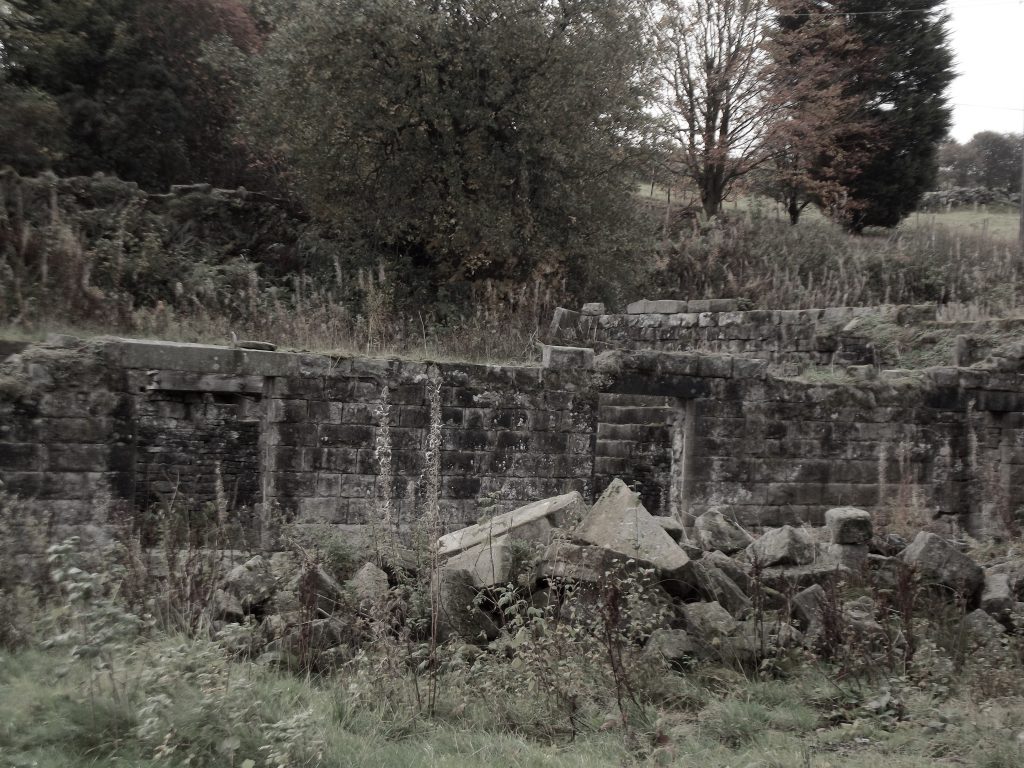 Front doors of the cottages 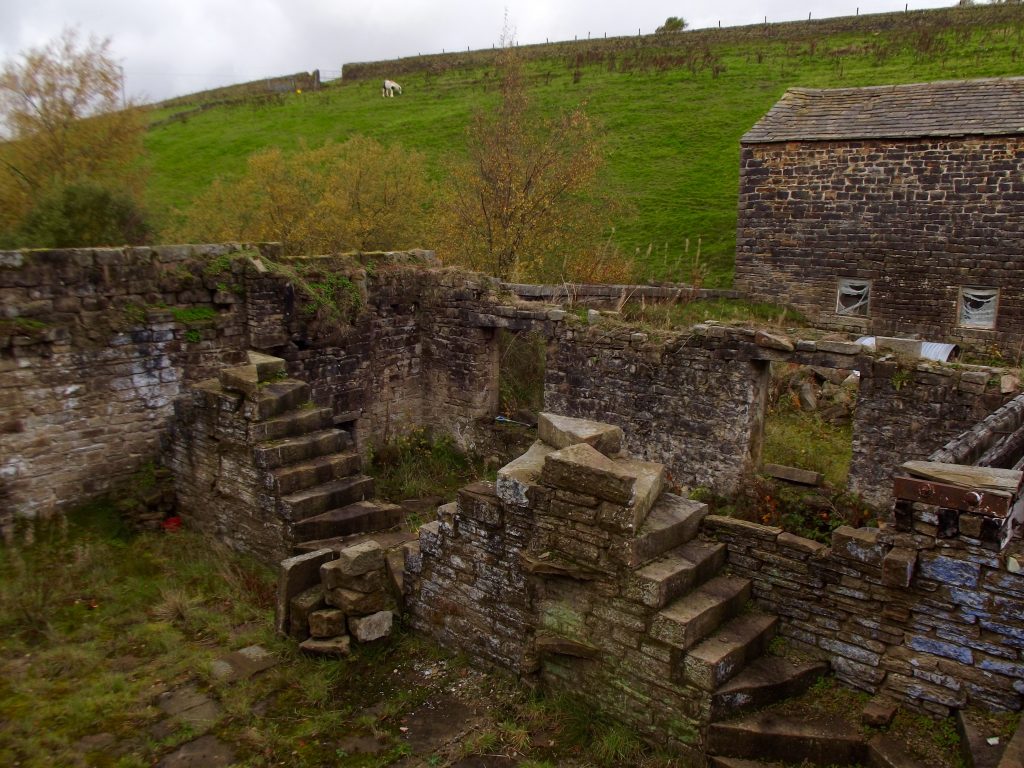 Stone stairs leading to the second floor of the cottages

I knew the mill itself had been demolished and the site was now a private house. Just as I approached two people were just coming up to my path from the building? “Is there a public footpath through the mill site?” I asked. “No.” “OK. My ancestors used to live here.” And that was that.  The lady was very knowledgeable but told me that her husband was the one I should be talking to. He’d done lots of research on the house and mill. Perhaps I’d like to see “a whole load of papers” he’s assembled. With that we exchanged contact info and she proceeded to take me on 20 minute tour of the site. She pointed out the flat area where the actual mill had stood. I could even see the footings of the gully that had held the waterwheel. Cool! There are the remains of 6 cottages, and from our vantage point on the hillside just above we could see into their kitchens one of which still had blue painted on the wall and tiles close to where the sink once was. Her husband had grown up in the currently occupied cottage and remembers riding his bike on the flat ground that once would have been the floor of the living room. A largely intact barn overlooked the ruins, which might possibly have provided stabling. The current cottage is in the process of renovation. foot access is over a tiny plank of wood over the Colden stream and there’s a very narrow wooden arched bridge too. 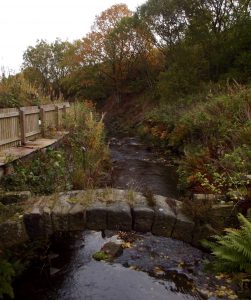 Access to the top storey was once by a very elaborate pathway wide enough to drive a horse drawn cart along, and it led directly to the stable/barn. This path necessitated the building of a high retaining wall with two elaborate vaulted archway, now used for storage. As we chatted further about our ancestry we joked that we might be related.   I discovered that the lady’s husband was a Cockroft and that rang a bell. Cockroft is a very common name in this area. There are hundreds of them in  church records. Then it dawned on me the context I’d heard Cockroft: a Cockroft had designed the trestle bridge at Blacke Dean. “Ah, that was my husband’s great great grandfather,” she said. “He was on the first train that went over the trestle bridge when it was completed.” When I visited the trestle bridge footings about a month ago I had borrowed a book from the library and copied a photo of the people on the first train across! And here I was  doing research into my own family and finding myself chatting to Cockcroft’s great great grandson’s wife! Small world. It’s this feeling of connection that I sorely missed living in the US. 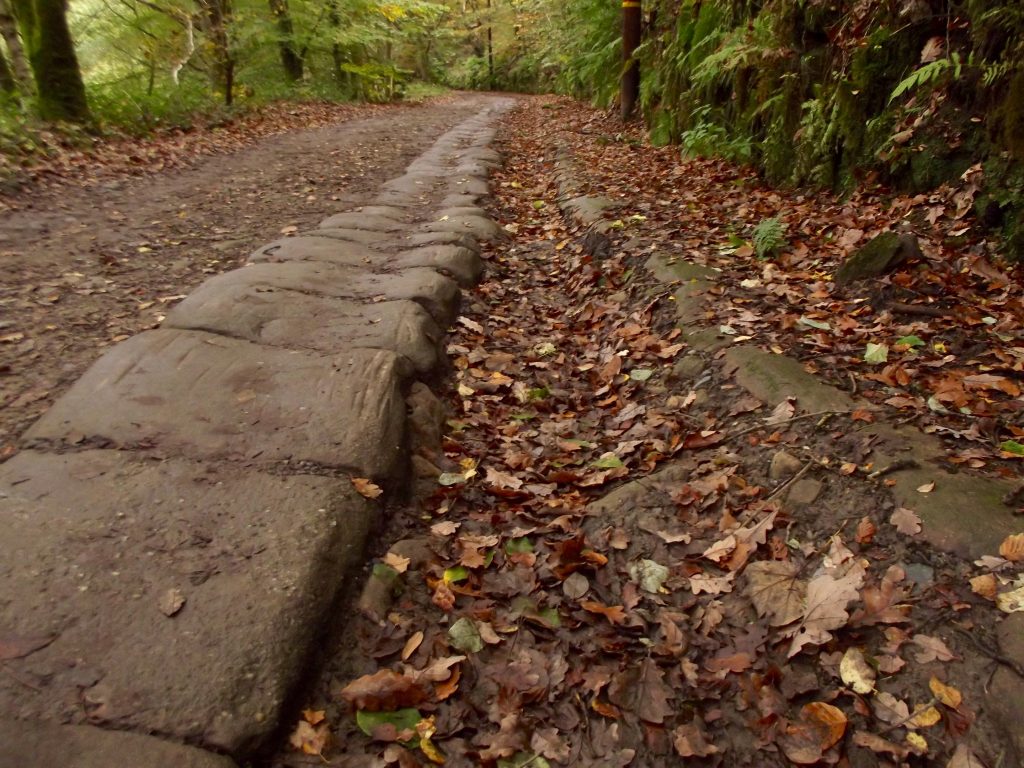 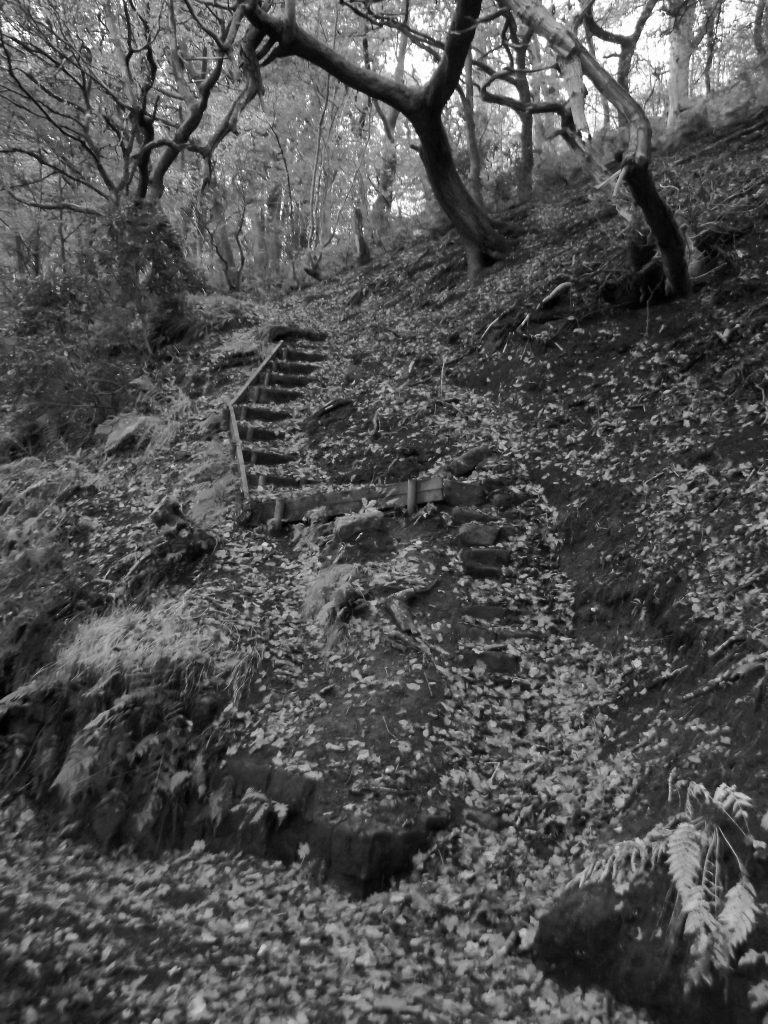 The pathway to the mill. Imagine going up and down this wearing clogs on pitch black mornings and evenings. 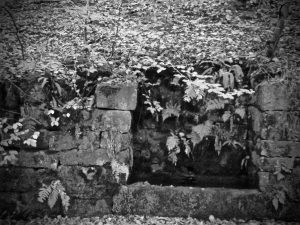 Horse trough built into the roadside for the thirsty horses as the trod back up to the mill to collect another load.

Hudson Mill goes back a long way. In fact, here was a medieval corn mill here which was first mentioned in a document dated 1353 when it belonged to John de Sothill. There was also a fulling mill nearby where woollen cloth would be cleansed close by. In 1571 Thomas Hudson left his eldest son John ” 3 roods of land and … a fulling mill near the Goosehey … and the mill dam, with license for digging and casting anew the said dam on the water of the Colden”. It is Colden water (a river) which runs through the valley. 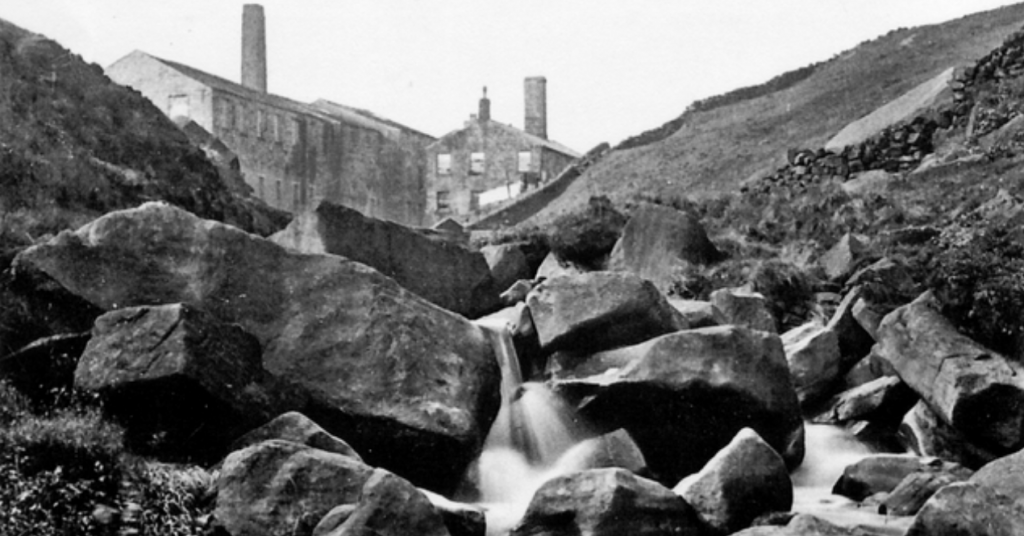 Photo from Wild Rose arts – Hudson Mill – no date. Is that Giles’s washing on the line?

In 1705, the mill  Hudson mill, or Stansfield as it was sometimes known, was granted by Sir George Savile to Thomas Greenwood, yeoman.  The lease of the water corn mill was for 20 years “the yearly rent of eight pounds of lawful money of England at the feast of Pentecost and Saint Martin the Bishop in winter”. The mill was used for the shelling of oates in 1802 but when the mill was rebuilt after a fire an agreement was made between George Savile and Turner Bent and Co., cotton spinners. Turner Bent and Co. “were to have the use of the chambers over the waterwheels at the east end of the corn mill called Hudson Mill”.
The mill must have been in a dilapidated state by 1840 because in that year Thomas Barker asked the agent for stone and six good trees to rebuild the mill and dam.  He comments “the cotton trade is very low at this time.  The mill ought to be at a low rent, especially with the present depressed trade. The prospect in cotton is very gloomy.” By 1845 it was agreed that he could set up a steam engine and replace the old water wheel with a new water wheel of improved capacity as the old wheel was for corn grinding.

Williams Barker had gone into partnership with Thomas Barker (there was no close family connection) in about 1845, weaving and finishing fustian at Hudson Mill.  This was to develop into a prosperous business, which continued under the same name until 1890s. In 1890 ‘Industries of Yorkshire’ lists William Barker fustian manufacturer, dyer, finisher and wholesale clothier, fustian manufacturing at Hudson mill with 135 looms, power both steam and water, 50 hands. William Barker also owned mills at Wood Top (which I’ve climbed to across the river in Hebden Bridge) and Mayroyd Mill, which has been converted into town houses and  where I spent the summer of 2017! 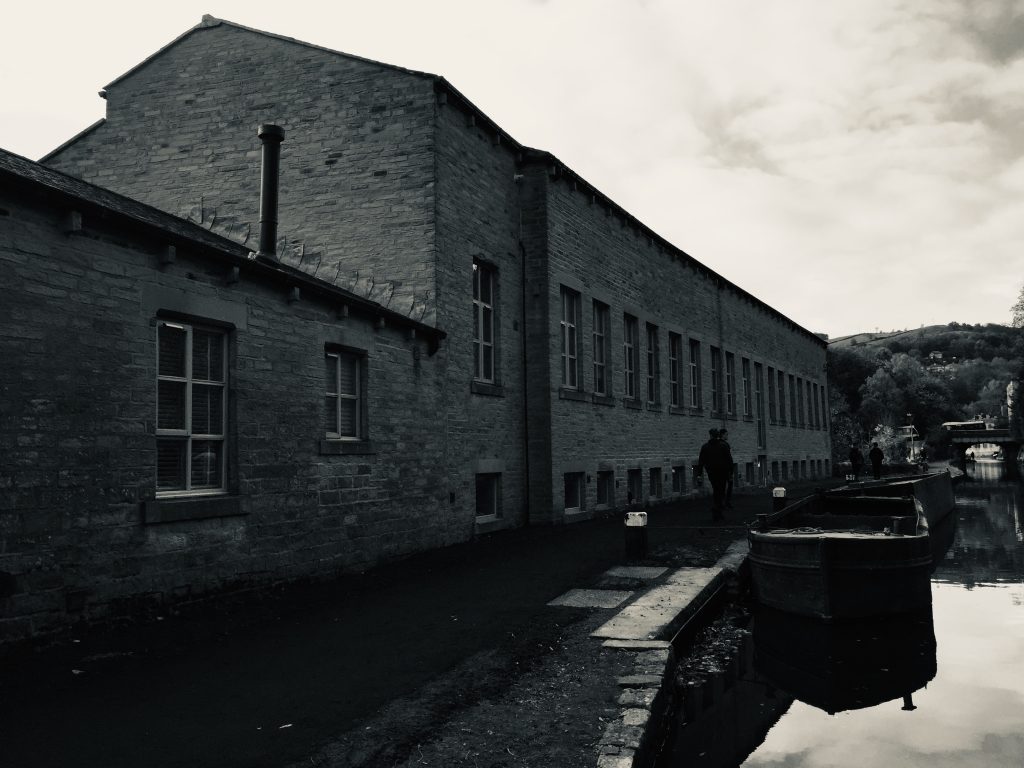 ‘The Outfitter’ in an article published in 1893, cloth was taken from Hudson Mill to Wood Top for dyeing and finishing, and then to be made up into garments at Mayroyd Mill. Barkers’ trade mark was well known and they were described as ‘the first house to introduce the making up of garments for working men into the locality’. (From ‘Power in the Landscape’)

Harry Greenwood, whose reminiscences were published by the Arvon Foundation (owned by Ted Hughes) in 1976, was a weaver at Hudson mill in about 1904. The mill ran with a gas engine and had a plant for making gas and it had a water wheel which ‘ran away’ sometimes. The mill was three storeys high and they were weaving fustian by weight. 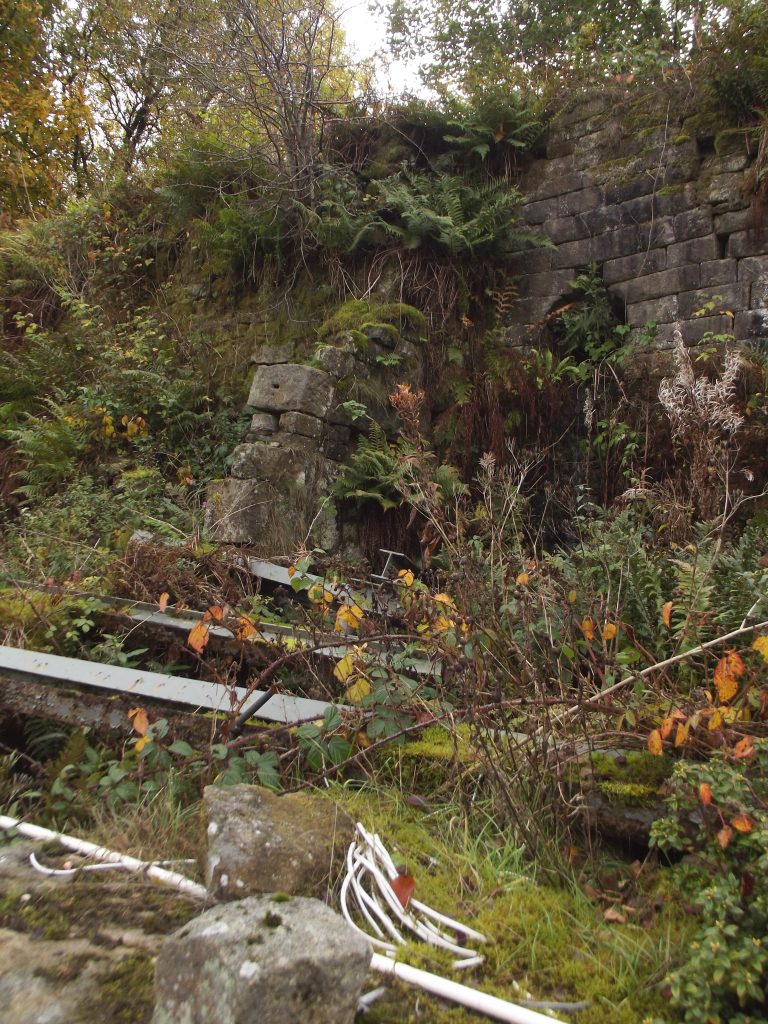 The site of the water wheel

Florence Sunderland and her brother Giles