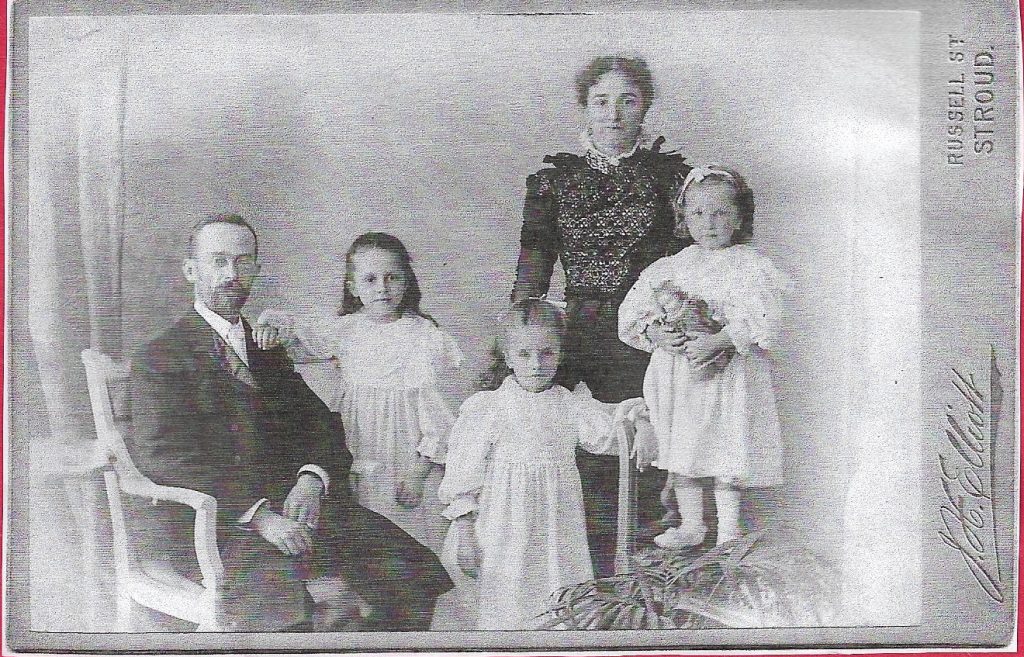 Sydney married into the Denton family after the Dentons moved up from the Cotswolds to live in Ardwick, Manchester some time between 1877 and 1880. Interestingly the photo above was taken in Stroud, Gloucestershire. Sydney was born in 1863 in Hyde, Cheshire and was baptized on Nov 8th of that year at Godley, Chester. His father, Beriah was a commercial traveller who was born in Chisworth,   a hamlet near Glossop, Derbyshire. It is located 3 miles south-west of Glossop’s town centre, on the south side of the Etherow valley.

His mother, Harriet, was from Gee Cross, a suburb and village within Tameside Metropolitan Borough, in Greater Manchester. It lies within the town of Hyde and borders Woodley in the Metropolitan Borough of Stockport and Godley, also in Tameside metropolitan borough. Sydney was next to the youngest of 6 children born to Beriah and Harriet. 1871 find the family living at 27 Market Place, Hyde. 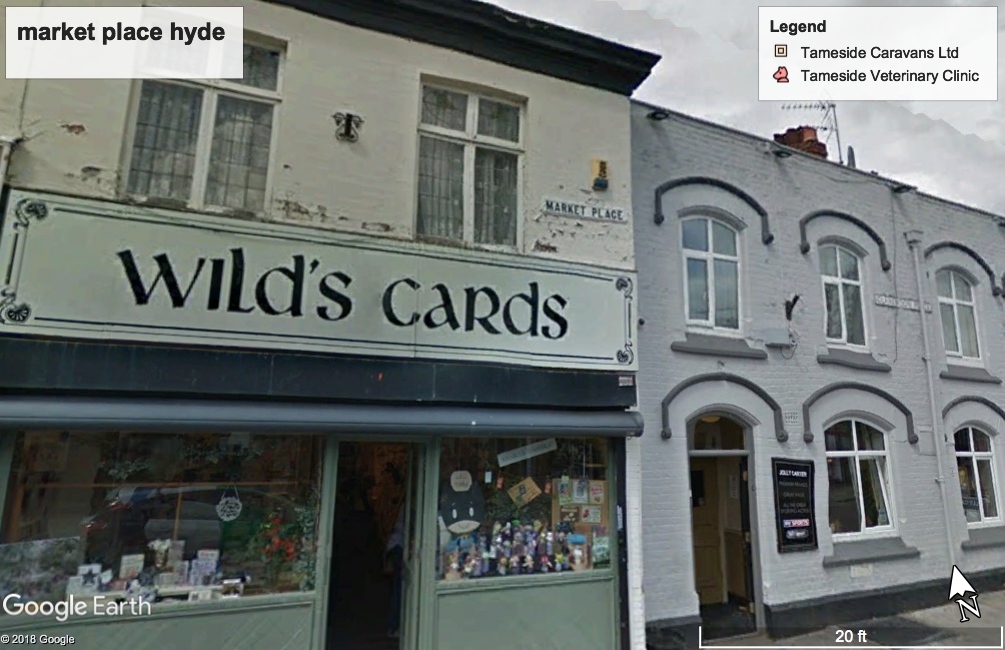 Beriah is a draper so I presume the family lived over the shop. London University have a record of Sydney, of his matriculation in June 1880 at Armitage Street School, Manchester and Pr. St., 52nd in honours (whatever that means). 1881, Sydney is 17 years old, a pupil teacher living with his family at 464 Stockport Road, Chorlton on Medlock. His father is now a traveller (millinery) (shop) and his wife is a milliner. Sydney’s sister, Emeline, is a dressmaker, so it seems clear that Sydney is the academic in the family. At age 47 Beriah married for a second time, this time to a 22 year old, Francis Elizabeth Shaw from Bollington in Cheshire and three further daughters were born. The new family lived in Kendal but Sydney appears to have stayed in Ardwick and he married my second great aunt, Amy Agnes Elizabeth Denton at St Benedict, Ardwick on April 2nd, 1890. 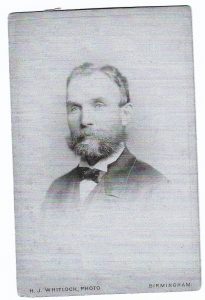 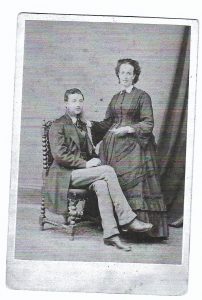 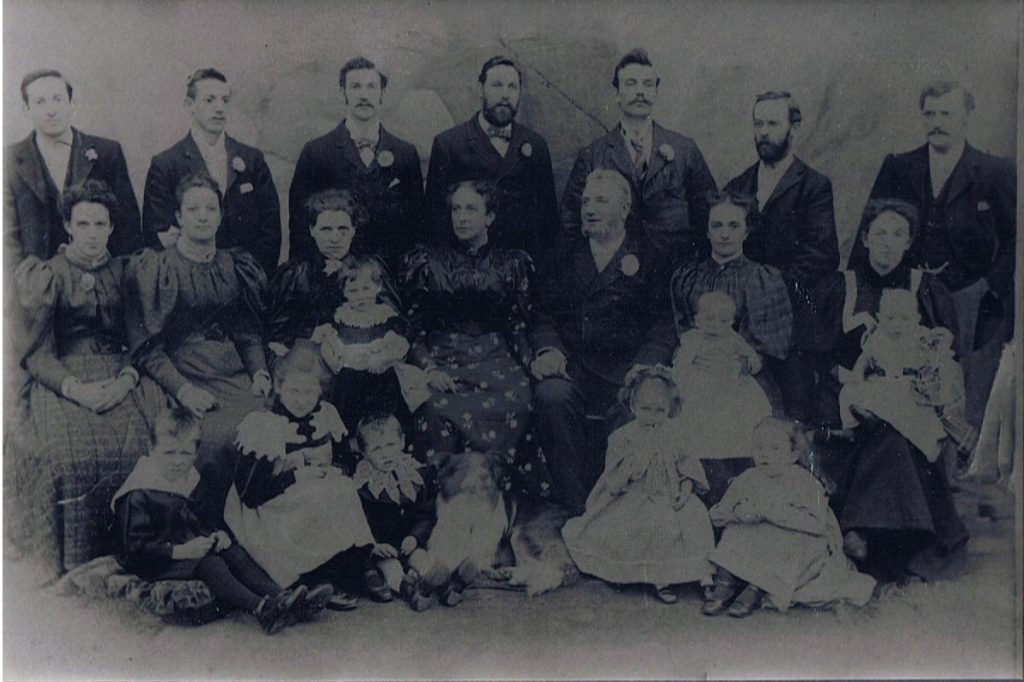 The Dentons! Sydney is second from the right with his wife and three daughters. George Vincent and Janet Morgan will also be on this photo. 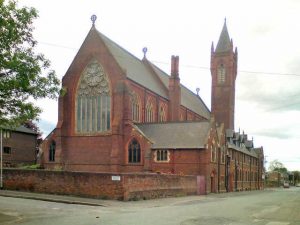 St Benedict church where the Coopers were married is now a climbing centre!

Guests at their wedding who signed the register were Samuel Denton, George Vincent Denton, Nathaniel Denton and Janet Morgan Denton. Only one Cooper signed the register, Beriah, Sydney’s father. Their daughter, Gertrude Alice was born a year later. 1891 sees Sydney, Amy and their daughter living with Amy’s parents, Samuel and Joanna Denton at 7 Grove Street, Ardwick. 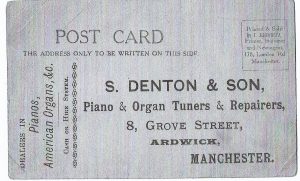 Samuel is a professor of music and Sydney is an assistant school master. It must have been a large house, or perhaps two houses since his business card says #8 Grove Street: 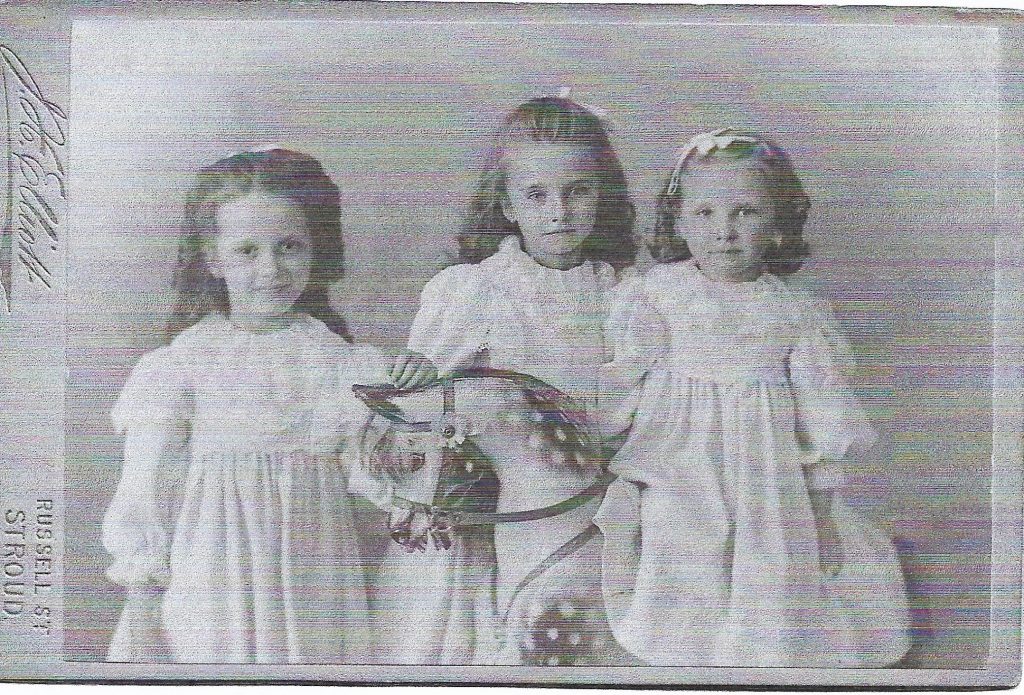 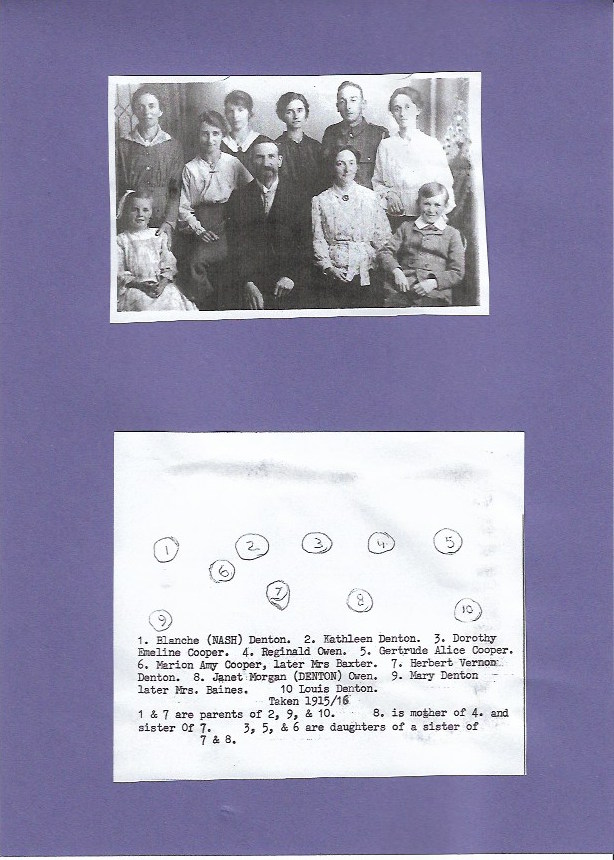 Sydney’s 3 daughters, all grown up

In 1901 the family are at 65 Clarendon Road, Crumpsall and Sydney is a school master. Amy died in October 1903 leaving Sydney with daughters aged 8, 10 and 12. The following year Sydney is still at 65 Clarenden Road and is listed in the trade directory as a schoolmaster. In January 1905 Sydney remarried. This time his wife was Clara Shadwell, aged 22. By this time Sydney was 42 with three young daughters. In December of that year Sydney’s body was found in the Rochdale Canal, the same canal that runs through Hebden Bridge, just across the park from my apartment. Manchester Courier and Lancashire General Advertiser carried the following account on Saturday 23 December 1905: 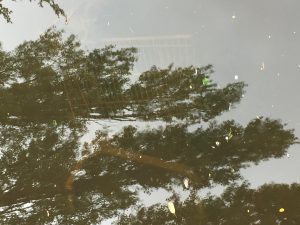 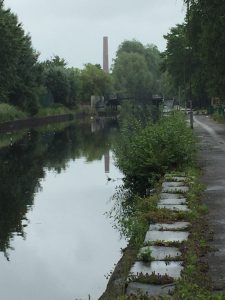 The body Mr. S. H. Cooper, of Droylsden Road, Newton Heath, was found in the canal at Hollinwood Tuesday.He was the master at the Hague Street Board School, Newton Heath, and has been absent from his duties for some weeks owing to illness. He was forty-two years age. 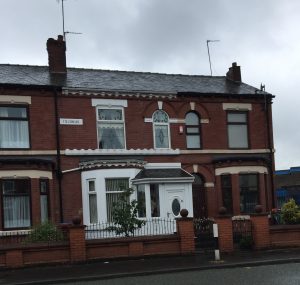 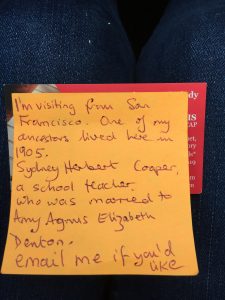 Note I put through the letterbox

I don’t know what his illness was.  He died Dec 18 or 19 in Rochdale canal, Hollinwood. Sarah and I visited the site in 2016. His address, 98 Droylesden Road is very close to the canal and I put a note in the letter box at the house telling of my visit but the occupants didn’t get back to me. The canal at that point is now quite bleak – full of weeds, and am old supermarket trolley was half submerged in the water. Probate shows that Sydney left all his £206 7s to Clara. 6 months later Clara gave birth to a son, Sydney Herbert Shadwell Cooper who died in in Stockport in 1983. What a tragic story. 1911 widow Clara is living with her father John Abbott Hart Shadwell and her son at Bixlyn Brantwood Road Heaton Chapel Stockport, in a house with 7 rooms – very spacious. The road still exists and is lined with smart semis going for an amazing £435,000 in 2016! Also living with them is her father’s sister-in-law. Clara is a school teacher. I wonder if Clara and Sydney met teaching in the same school. I have requested a death certificate.