As I was setting  out for Hebden Bridge railway station there was an almighty clap of thunder, the heavens opened and I found myself in a major thunder storm. The heat wave had broken violently. A quick change of plan had me travel to Halifax on the bus instead because it stops right outside my place. By the time I reached Halifax half an hour later the sun was shining and I had to make a quick dash into Poundland (horror of horrors!) to purchase some sunglasses.

We met our guides outside the Old Cock Inn, which traditionally was one of Branwell’s drinking haunts. 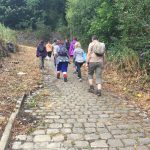 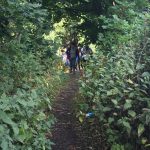 I thought the we’d be walking around the streets but we soon  found ourselves on a cobbled path that led up Beacon hill. It became a track, quite slippery in places with the recent downpour. This was originally a drovers’ road to Wakefield. From the top I could see Queensbury Mill where we’d seen a Black Dyke Mills concert, Stoodley Pike, and High Sunderland, the old hall which now is thought to be the building that emily Bronte had in mind when she describes Wuthering Heights. The old hall was demolished in 1952 and our guides showed us a drawing of the original hall, while reading Emily’s description from her book. We were close to Southowram where she was governess for 6 months at Law Hill School, and had visited the vicarage where Father Guy had invited Rachel and I to see the parlour where Emily had visited the then vicar’s daughter.

Great view of the Piece hall and Square Chapel beneath a menacing sky.

The guides – Craig Bradley (poet) and Nicky Harlow (novelist and creative writer) currently working on a work about Emily Bronte in Halifax.

Down into the Shibden Valley to Shibden Hall. I was last here a year ago when I gated crashed (accidentally) the filming of a Bollywood movie. It’s currently closed for filming a new movie by Sally Wainwright about Anne Lister whose home this was.

Making friends with the Shibden lion.

After lunch at Shibden Hall we walked back into Halifax where a few minutes later, as I headed for the station another roar of thunder heralded the next thunder storm. How fortunate we had been – dry weather for our walk (71/2 miles), but rich black clouds for photos.

12 hours in the Yorkshire Dales – and 12 miles hiked