I slept well and woke at 6:30, knowing that I had to have breakfast at 7:30. That’s really early for me! An elderly gentleman joined us at breakfast. Ian, the only other person on the tour from England, was dressed in a linen suit and looked as if he’d come straight out of a Merchant Ivory film.

We took a van to the bus station and I chatted to Ian for a few minutes as we waited for the public bus that would take us all the way to Palermo. I stepped aside to take a photo only to find that Ian had collapsed. Alicia called the paramedics who arrived in six minutes, but it didn’t look good for Ian. We boarded the bus, on Alicia’s instructions as she ran around on her phone trying to contact various people.

The bus picked up people at various stops in Catania and then found the freeway and headed through a landscape that I could easily have mistaken for the Napa Valley, filled with vineyards, orange groves and olive trees. I found myself thinking about my 2003 trip to Southern Italy. That was in November, at the height of the olive harvest. I was sitting across from an Italian guy in his 20s who cried his eyes out throughout the journey. We passed a couple of hilltop towns reminding me of out trip to  Tuscany. 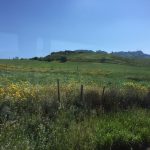 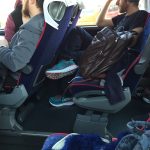 We arrived in Palermo at 12:30 and checked into Hotel Alessandria. We had been warned that the hotel is on the second floor and that there is no lift. What I’d forgotten, however, is that each floor had 20 foot high ceilings, making it a long, long way up those stairs. I was so glad that I could turn my roly bag into a backpack. I asked the concierge about the history of the building. He believed it had been built by a wealthy family around 1885 and had served as a soldiers’ barracks during the war. It has been a hotel for about 25 years. 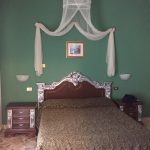 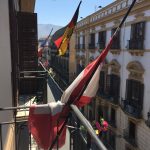 My bedroom and view from my balcony

After checking in we were escorted to a place for lunch of salad, pasta and beer. This wasn’t heavy, stodgy pasta but light and fluffy and I had seconds of the salad and the pasta. Then our group wandered around the capital city for an hour or so before meeting

Our group on a city tour

up with our Sicilian guide for a two hour walking tour of the old city. As usual the focus was on duomos, fountains and statues, while trying not to be run over by vespas. Other things to avoid in Palermo are dog pooh and rubbish from overflowing rubbish bins, which obviously haven’t been emptied in months. I don’t think our group as a whole was particularly interested in the details that the guide gave us: it was more of following someone around who knew the best spots for photos. I gleaned from her talk that Sicily had been severely bombed during the Second World War. We saw buildings that had

Bombed during the war

been bombed that are still held up by scaffolding. During the Spanish occupation, much earlier, the Spanish didn’t really have any use for the island and left it to go to rack and ruin. Only one Spanish King ever visited the island and his only visit is commemorated by a statue – what else?

Lunch beneath a photo of the market

The Americans funded the rebuilding of much of Europe after 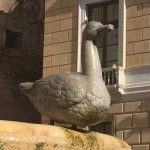 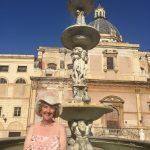 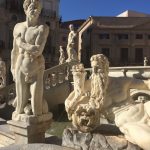 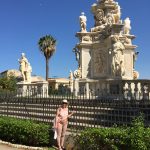 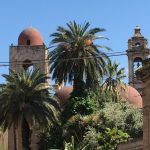 the Second World War but the Americans didn’t put any money into Sicily whose strategically placed port of Palermo was a major target for the bombing. But it’s this lack of funding for the rebuilding that has left Sicily so poor, and it remains so today. Only licensed guides can give tours. Alicia was recently fined 50 Euros for pointing something out to a member of one of her groups. 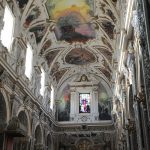 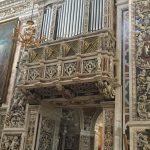 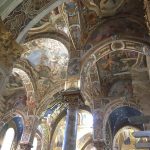 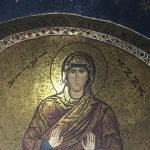 After the tour the group opted to meet again at 8 p.m. for dinner together, and we hoped we would have word from Alicia about Ian. 8 p.m. came and went. 15 minutes later we were still waiting for a few of the group to appear. Meanwhile everyone seemed to have their own idea where to eat. It was like something from a Woody Allen movie. I didn’t mind where we ate, so I just sat back and watched the antics. The couple from Colorado had checked out a few possible places during the afternoon. We passed an inviting outdoor restaurant with accordion player but the Colorado people said, “You can go there. We’re not,” so we all ended up at Antica Trattoria which was just fine.  I opted for the pizza Napoli (with anchovies) which was lovely. Everyone was very sociable as people shared their travel stories. I ended up relaying my journey to Kashmir. 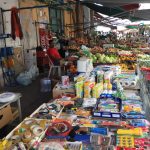 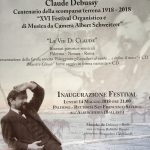 I went straight to sleep after my nightly journal and Facebook report and for once the street outside my balcony was quiet. I tried for a few minutes to turn on the TV using the 3 remote controls, but the only thing I managed to turn on was the air conditioning! 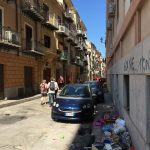 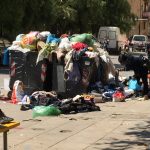 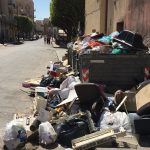