My story of Greenwood Lee

This amazing building, first built in the 11th century is currently for sale. I spent a wonderful morning there with the owner. She’s been approached by several film companies scouting for locations.

The current owner remembers when these servants’ bells were still in use. The last member of the Gibson family to own the house was Abraham Gibson who died in 1956. The house was offered to the National trust but they didn’t take it. The Trust did, however, taken on Gibson’s Mill, which is in the valley just below the house. it’s now a major tourist spot and I recall my mum talking about visiting it before she was married.

Beautiful gates inside the barn. The current owner has been raising baby peacocks and pheasants in here. 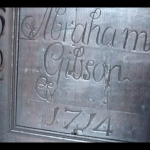 The last Abraham Gibson (there were 5 generations of them). From the HM historical society

I found these  in the archives. I visited Wainsgate chapel in 2017 – and had tea there!

Sometimes the wrong train takes you to the right station