My kind of country

A Day with no plans: August 10th

I decided to go back to Todmorden Market

Then my laptop went on the blink which necessitated a trip to the Mac store in Leeds: 50 minutes by train

I discovered this underground river underneath the railway station in Leeds!

In the evening I attended a cabaret called Listen with Mother. Here’s my Airb&b host (and Happy Valley Pride director)  checking the guest list.

View of Stoodley Pike from Heptonstall school which my ancestor built

At The Cross in Heptonstall: the Gin festival. The 3 people on the left all currently live in Lily Hall

I ventured into the Quilt Cabin and found these local quilts 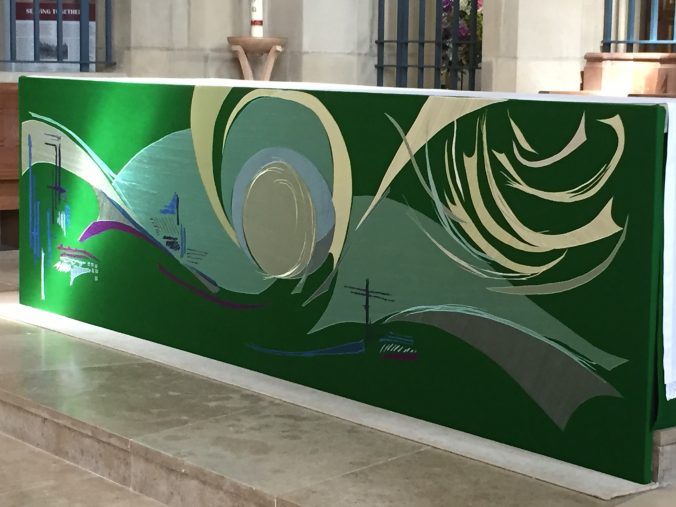 A date with posterity

3:50 I’m feeling a little stuck for something to do here in the centre of Bradford. I’ve just finished a two hour project making sure my name goes down in history. I sat with 16 others working on a tapestry in Bradford Cathedral! I’d seen the event advertised when I went there for a lunch-time organ recital two weeks ago, and so today I just turned up and

was welcomed with open arms. Everyone who contributes their needle-working skills is named in a book that will be kept with the tapestry. There’s no telling how long it will take to finish, but a similar finished work of art currently adorns the altar. It ‘s green but there are a series of 4 for each of the seasons. The man who was sitting next to me has the reputation for being the best needle-worker in the group and he told me that he can do 180 stitches per hour. After watching me get started he said, ‘I can see you’ve done this before.’ 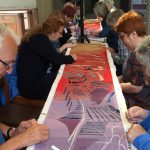 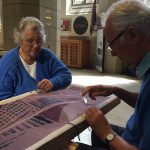 Tea (and biscuits, of course) were  served halfway through the workshop and I noticed the organist having tea too. For the second half of the sewing we were accompanied by the organist practicing for an upcoming recital in Brighouse. Before I left I asked the assembled group for suggestions as to what I should do for the next three hours since my return train ticket is only valid after 6 p.m. Someone suggested I wander round a district called Little Germany which has large ornate buildings, reminders of Bradford’s world

class wool heritage and its German population. Another suggested going into Waterstones
book shop and cafe because it’s housed in the old Woolshop – and that’s where I’m currently sitting There’s a life-size statue of an American man but someone has put a witch’s hat on him. Ha, ha. I didn’t get to the third suggestion which was to visit a former church which is now the Delius Center for the arts. I was a little confounded two week’s ago when I came across a statue of Delius in the Asian Gallery. I had completely forgotten that this quintessential British composer was, in fact, a son of Bradford from german extraction. Wouldn’t you have though he’d be named as one of the famous people from Bradford along with Titus Salt, the Brontës, David Hockney and  . . . .? I explored Kirkgate market where the manicurists (all male)  were doing a roaring trade. So were the kiosks doing eyebrow threading for girls wearing hijabs. Many women are wearing full-face veils.

5:30 I’m sitting outside Wetherspoons on the City Park plaza.It’s directly opposite the Magistrates’ Court and the guy sitting at the next table has apparently just appeared in court, his girlfriend having accused him of beating her up. ‘She were fuckin’ fit an’ awl.’ He’s also accused of kidnapping her daughter in the back seat of his car. He has to reappear in court tomorrow at 9 a.m. Meanwhile two young women sit at another table drinking beer while their children  cavort on the sculptures and fountains in the park. One toddler in a pram at Wetherspoons  is anxious to join her siblings. I burly guy on a bike  is

If you have a good imagination this could be the Houses of Parliament.

showing off his wheelies and teaching a young teen how to do it, while overhead on the big screen  (that shows Live from the Met operas for free, and the Olympic Games) I can watch the current men’s doubles at Wimbledon. Four girls, each of a different ethnicity, in smart school uniforms ‘hang out’ on the benches.

I waited until 6:30 to catch the train home where Chris was just leaving to attend a friend’s poetry reading. I watched a bit of Michael Palin Around the World in 80 days (in Egypt and Saudi Arabia) and a bit of Missing Joseph – one of the Detective Lindley series – before I realised that that was the book  I brought with me to read on the trip (and haven’t opened it once!). I booked a night at an Airbnb in Edinburgh for the night before I meet the tour. I need to plan for the night after the tour. Perhaps I should stay there for an extra day and research my ancestral connection with Edinburgh. My great great grandfather, Robert Dean who was a station master at Patricroft moved to the Duddingston area of Edinburgh near Portobello. In 1856 he was still in Patricroft but in 1858 his son John Thomas Fielding Dean was born in Berwick, Berwickshire (now the county of Lothian). His next 4 children were born in Portobello  (1859-1865) and then he returned to Patricroft. I presume that he got a promotion and moved north since his title was railway goods superintendent in the 1861 census,at Portobello, a step up from a railway office clerk  in 1851 at Patricroft. The superintendent had the responsibility of managing the transportation and delivery of goods that were carried by the railway company. Porters would have worked under him. Here’s his uniform.