A day of contrasts

Tools of my new trade 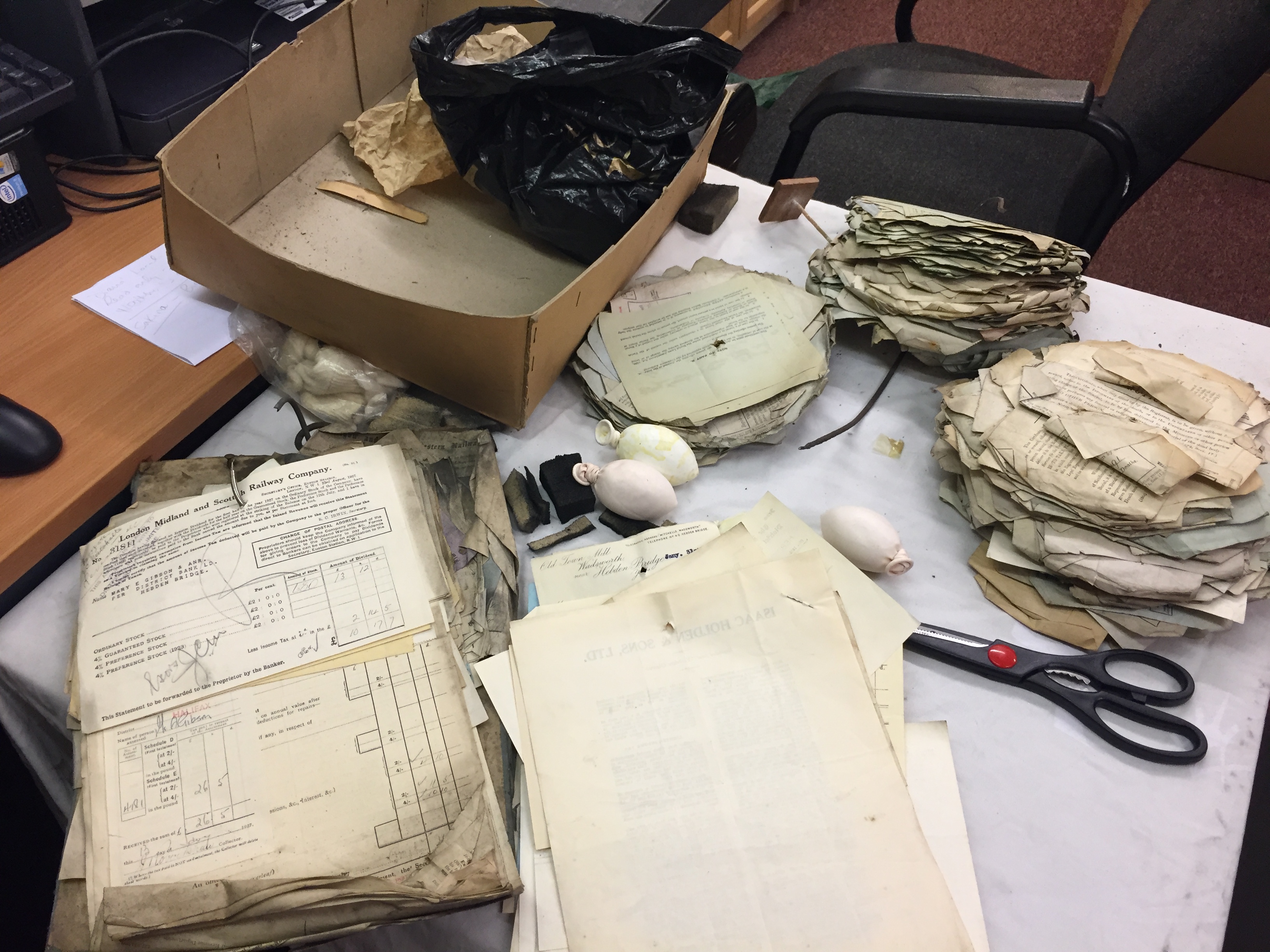 Letter to A Gibson, Esq at Greenwood lee, dated 1934. It gets really exciting when the letter is sealed and I get to open it – maybe for the first time in 100 years! 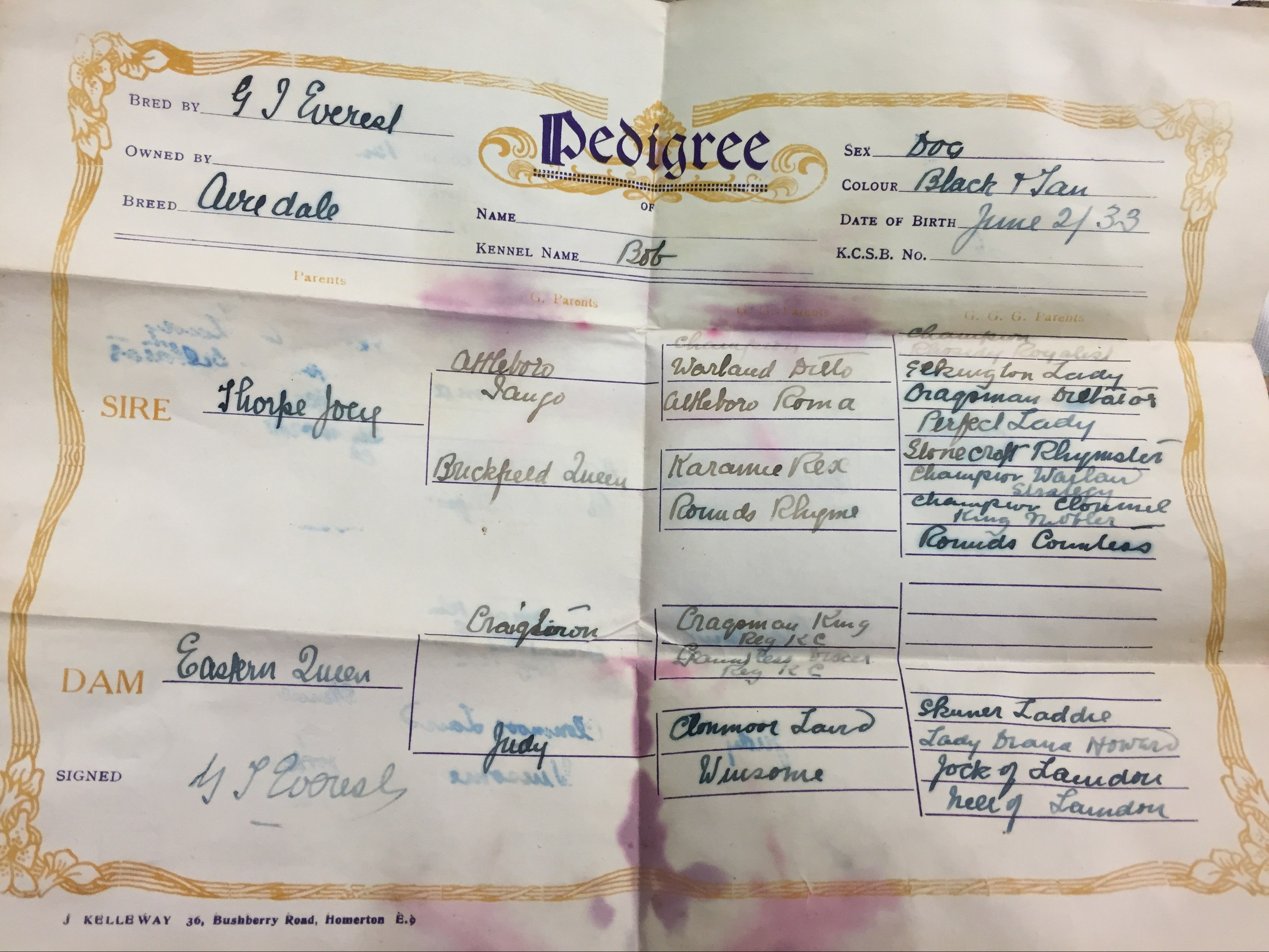 I spent three hours this morning tucked into the archives at the Hebden Bridge History Society opening boxes that once lived in Greenwood Lee, the house belonging to generations of Gibsons. I’d spent yesterday morning in Greenwood Lee, chatting to the current owner who still retains some of the Gibson papers. It’s a wonderful building, begun in the 11th century and as I walked up the drive a flock of pheasants flew in to join the peacocks who were just having their elevenses on the front lawn. It’s fascinating to go through these documents, and now doubly so, having been to the house. I found a hand-drawn map showing the position of Greenwood Lee in comparison to Gibson Mill (in Hardcastle Craggs). ‘In 1650 Greenwood Lee was twice sold. For a time it was in possession of the Sutcliffe family and in 1762 it was purchased at auction by Abraham Gibson. There was a rumour that Abraham was so drunk at the auction that he didn’t know what he was doing. Abraham ran a cotton spinning mill at Greenwood Lee and built on an extension to house the wheel before moving down the valley to work at Gibson Mill. Gibson Mill was eventually given to the National Trust in the early 1950’s along with Gibson Mill. The Trust sold Greenwood Lee off and it is now in private ownership.’ (From Power in the Landscape). Movie makers have expressed interest in using the home and the outlying buildings and land for movie sets. The house is directly above Hardcastle Craggs and Gibson Mill.

In the boxes I even found a doggie pedigree. The last Abraham Gibson was an avid Airdale terrier man. The current owner knew a lady who Mr Gibson used to give a ride to when she was a little girl. He had one of the first cars in Calderdale. His detailed account books are in the archives and go right up until the week he died in 1956. His personal diaries are there too, and postcards he received from friends or perhaps relatives on holiday in Blackpool and on a steam ship. Absolutely fascinating. 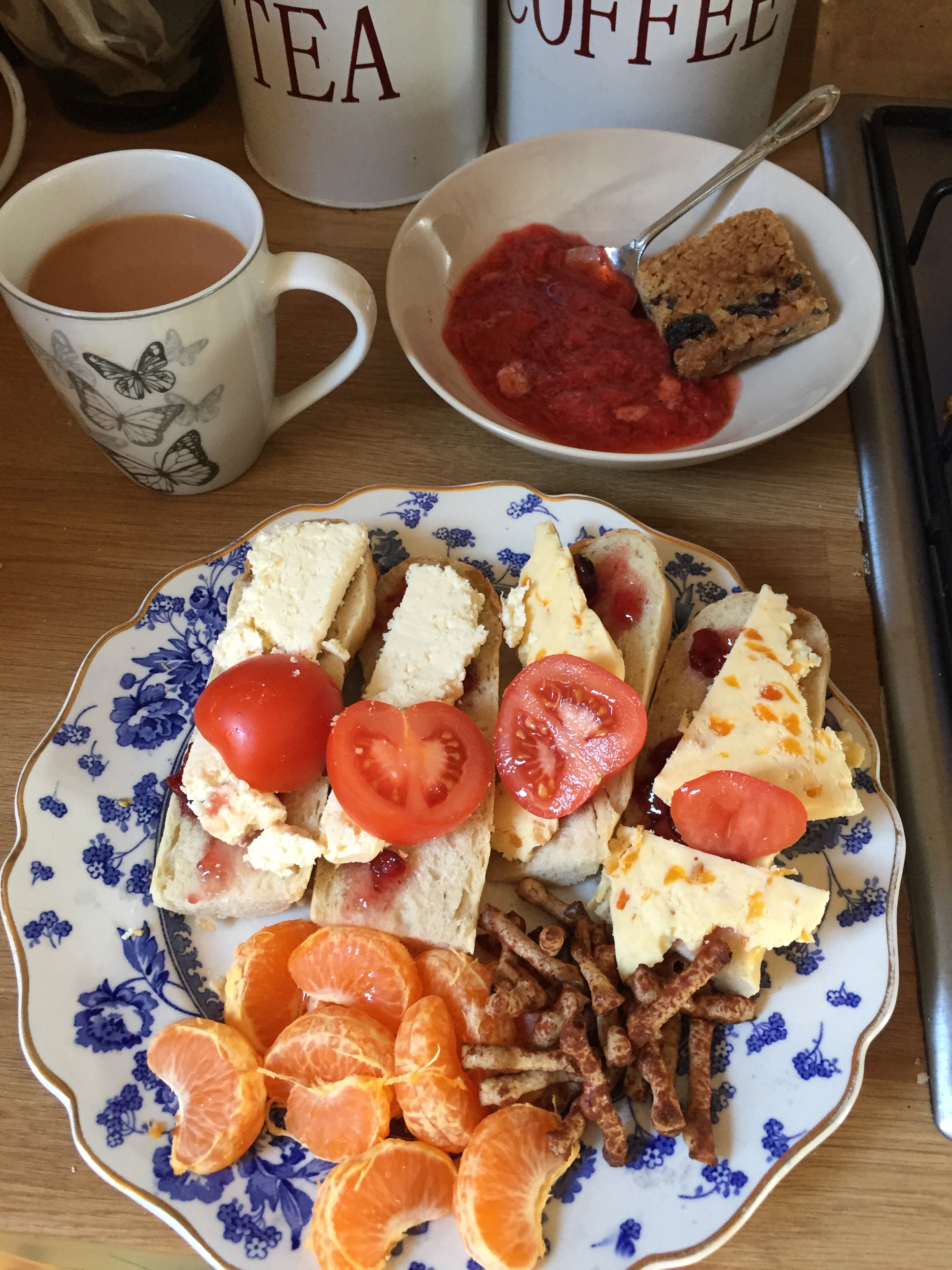 market on Thursday, and also got a baguette from the tiny bakery that’s directly beneath my apartment – along with the fish and chip shop. Once a week I see the potatoes arrive in big sacks carried over the delivery man’s shoulders!

After lunch in the company of the teary -eyed  British women’s curling team after their 4th place in the Winter Olympics, I tried to settle down for an afternoon at home. But the sun was streaming through my living room window, and with snow in the forecast for 5 out of the next 7 days I didn’t feel content mooching around indoors, so on the spur of the moment I put on my boots and within 5 minutes I was waiting for a bus into Halifax. Unlike yesterday it showed up on time – but this time with an Out Of service sign. Someone once remarked that they wished they lived in the town of  Out Of Service because so many buses go there. It was  bitterly cold waiting 15 minutes for the next bus and I realised that the warmth in my south facing living room had been very artificial.

This picture reminds me of Virginia City 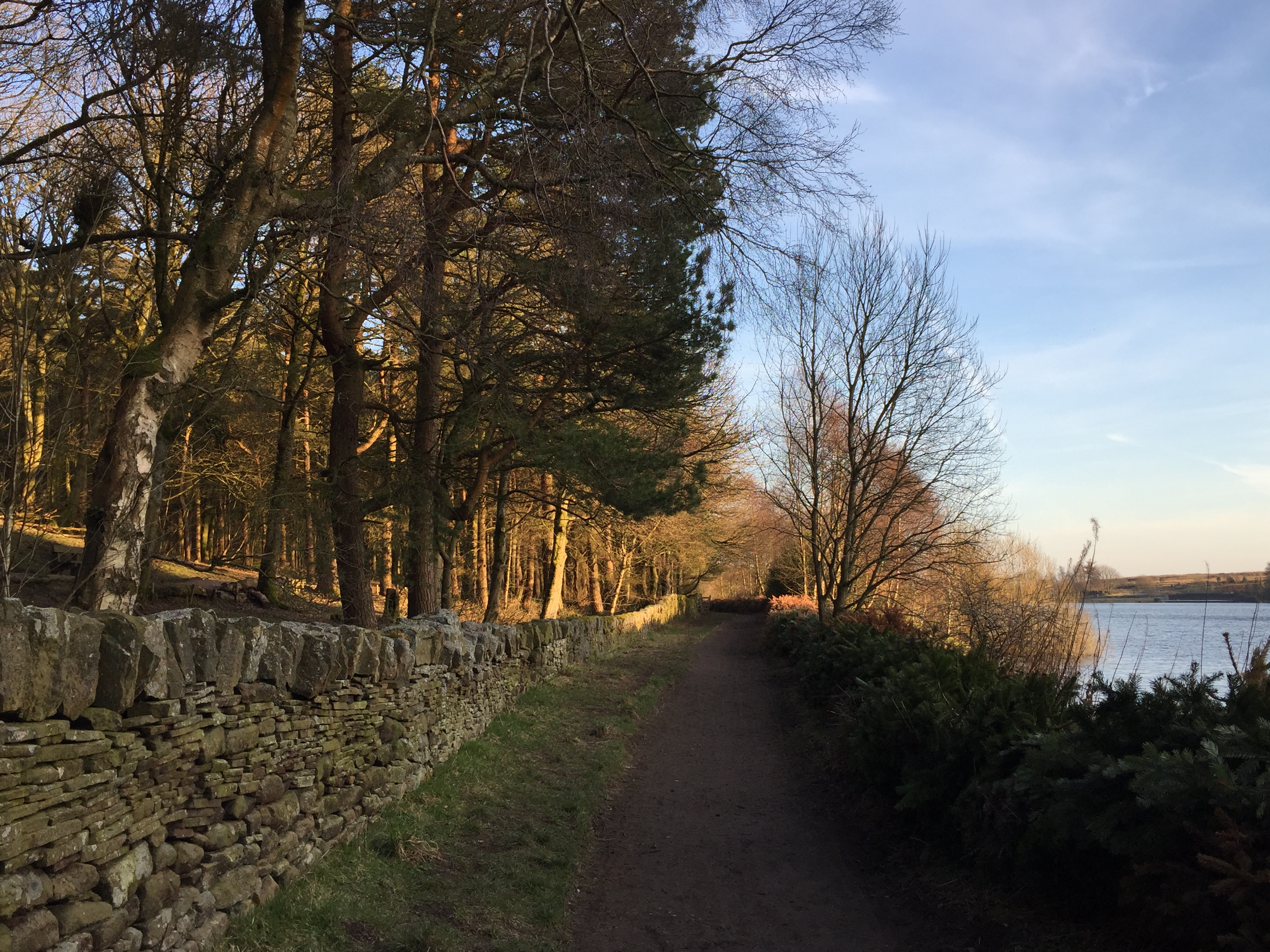 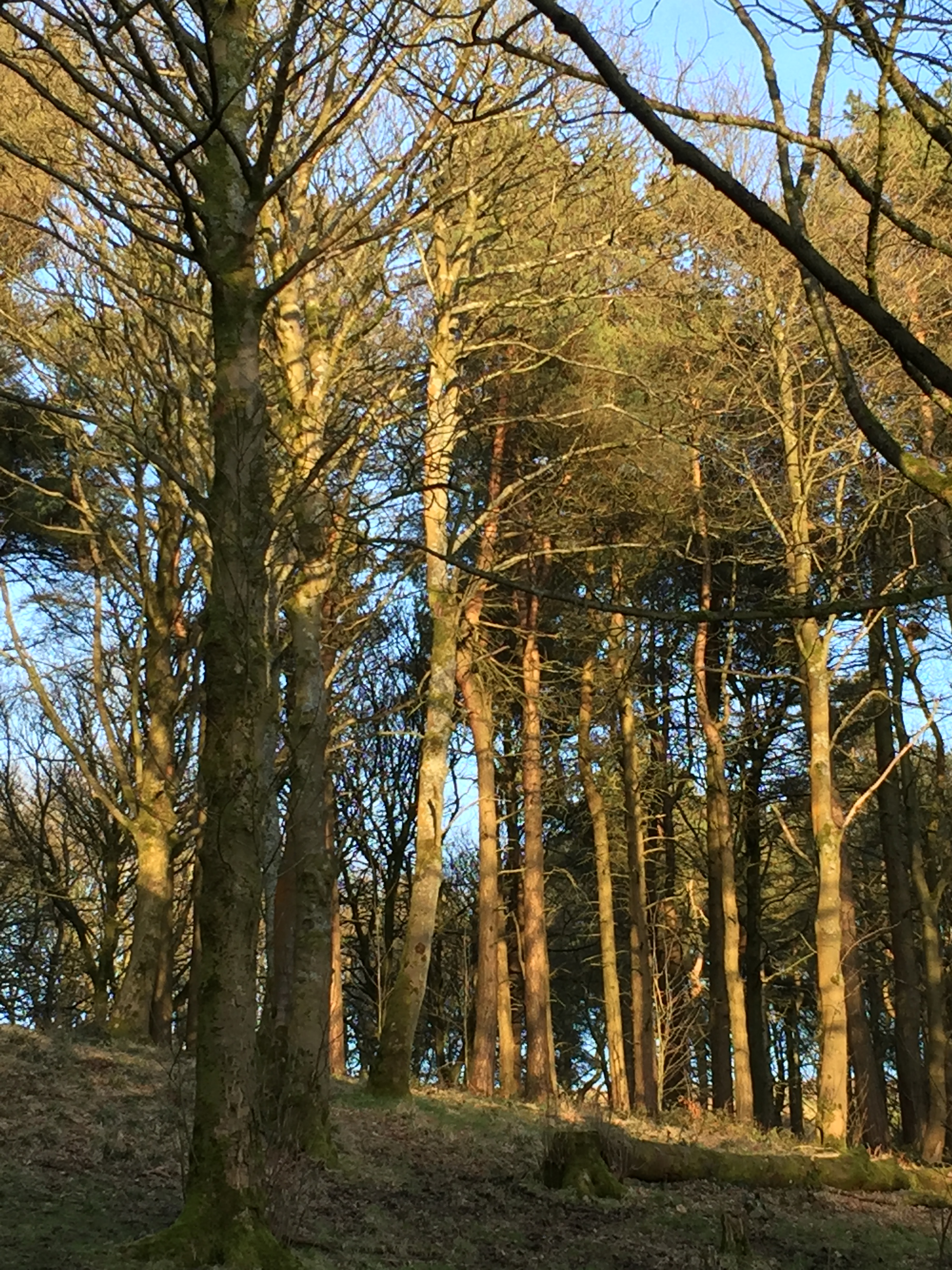 I was trying to capture the golden late afternoon sunshine

I was heading for Ogden water, a reservoir and country park on the North side of Halifax. Exploring Calderdale from Halifax to Hebden Bridge over the last week, getting my bearings on the lie of the land and the proximity of one village to another had made me realise that I hadn’t been North of Halifax. I popped into the bus station information office and a man with the longest fingernails I’ve ever seen informed me that I’d missed the last bus to Ogden, but I could get within about a mile by getting the bus to Illingworth. By now it was getting a bit late in the afternoon for setting out on such an expedition but I didn’t feel like giving up and going home, so I pressed on. Once past the sprawling complex of Dean Clough Mill, once the largest carpet manufacturing mill in the world (where I’d been to see a new production of Hard Times last weekend) I found myself in new territory. The landscape here is very different and reminded me of north Yorkshire. There are no steep-sides narrow valleys with fast running streams and consequently far fewer mills were built here, since there was no water power. It’s much more agricultural with rolling gentle hills. I followed Google maps so I knew where I get off the bus and walked along the crest of Keighley Road to the reservoir.

The wind was strong, the cold actually burning my cheeks but not to worry, I knew there was a cafe at the water’s edge. But . .  .Note to the Vistors’ Centre: Will you please update your website? It states that in February the Visitors’ Centre, cafe and toilets close at 5. It was 3:50 and all the buildings were  already closed. I think I must be turning into wimp because there were lots of people walking around the water, babies in buggies, even the occasional jogger in shorts for goodness sake, and a lovely old lady who reminded me of my mum.

It’s only a couple of miles around the reservoir and I found that it reminded me a lot of Entwistle reservoir in Turton. After crossing the dam I found myself in the woods, but what was this – a pile of old Christmas trees? I did a double take. OMG. Around the entire 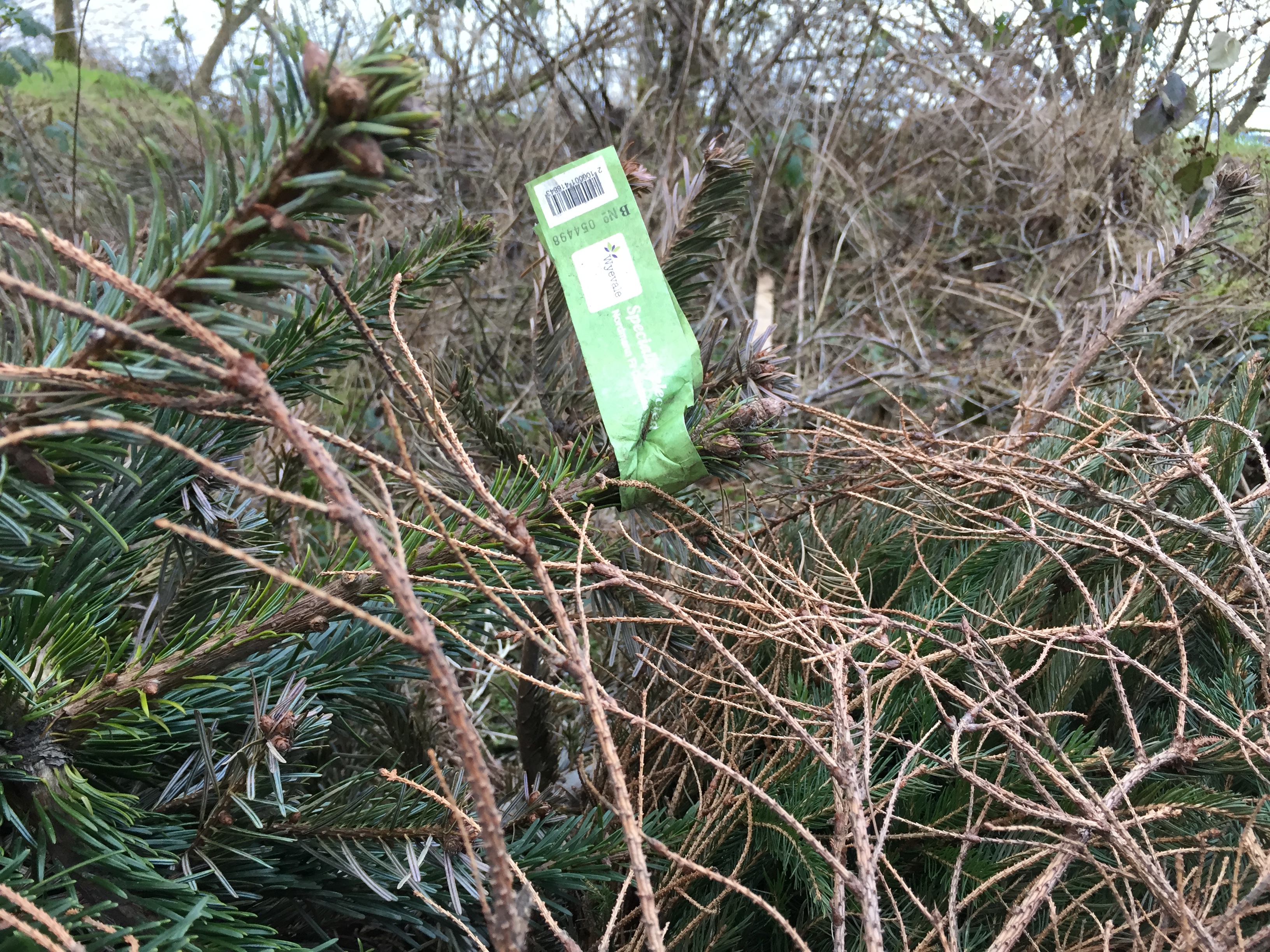 perimeter of the reservoir is a hedge made out of recycled Christmas trees. I looked in vain, hoping to see at least one Christmas ornament, but the only object I found suspended from one tree was a price tag! By the time I got around to the far side of the lake the sun was on the horizon and the light was beautiful. Taking photos was a bit

tricky because I need to take my gloves off for every photo. I’m seriously considering buying a second pair of gloves and cutting out just one finger to operate the shutter. I 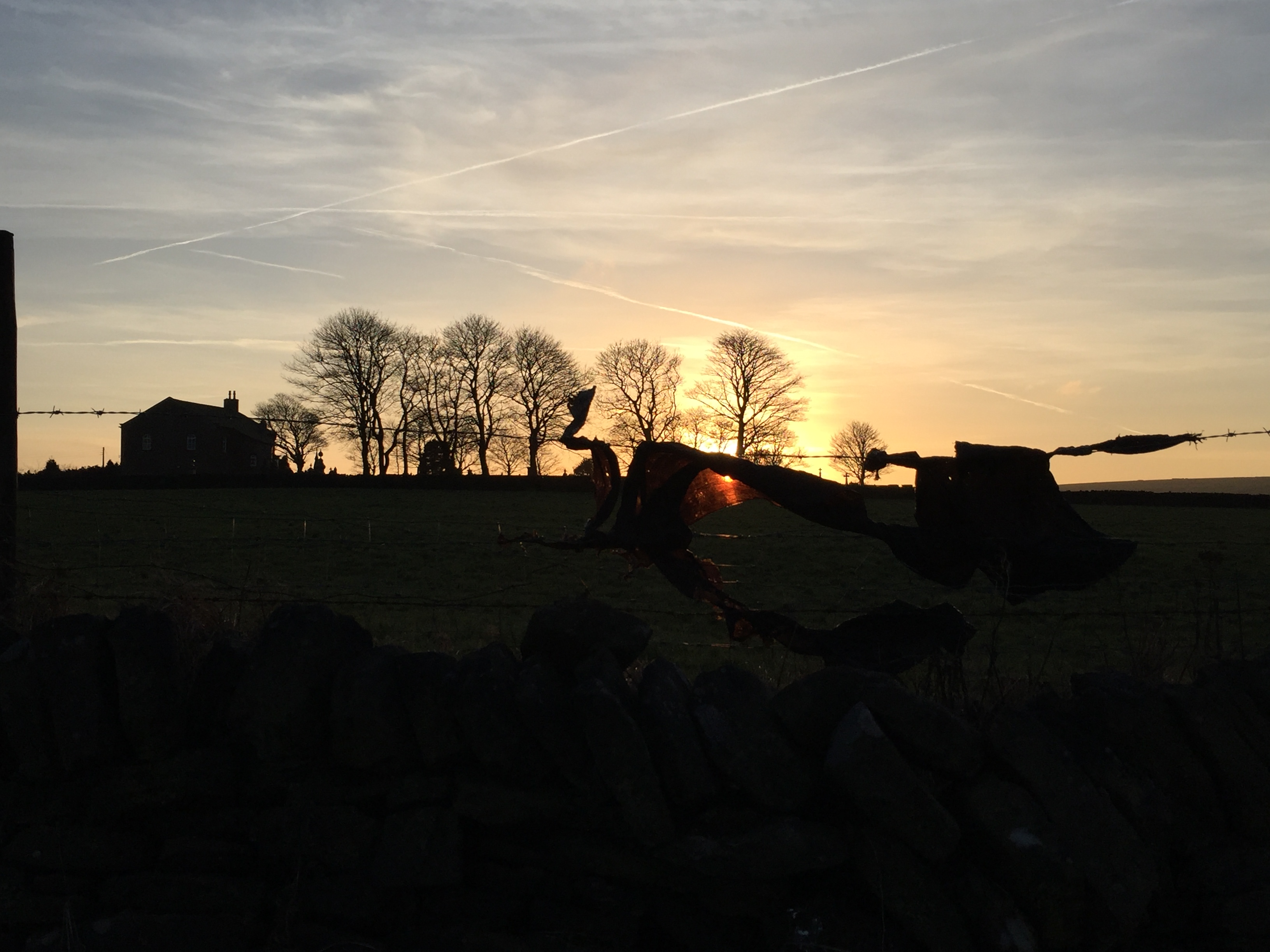 Even ragged plastic caught on barbed wire  can be attractive – sometimes

took a footpath back to Keighley Road and was not looking forward to waiting for a bus, but what was that? One was coming. I jumped on and was back in town in 20 minutes.

Desperate times call for desperate measures. I’d thawed out a little on the bus but I needed a hot drink to keep me company while I waited for the bus back to Hebden. It was 6 o’clock by now, almost dark and Halifax town centre had already closed its eyes and  gone to sleep. Only Costa Coffee was open, and even then I was their last customer of the day. 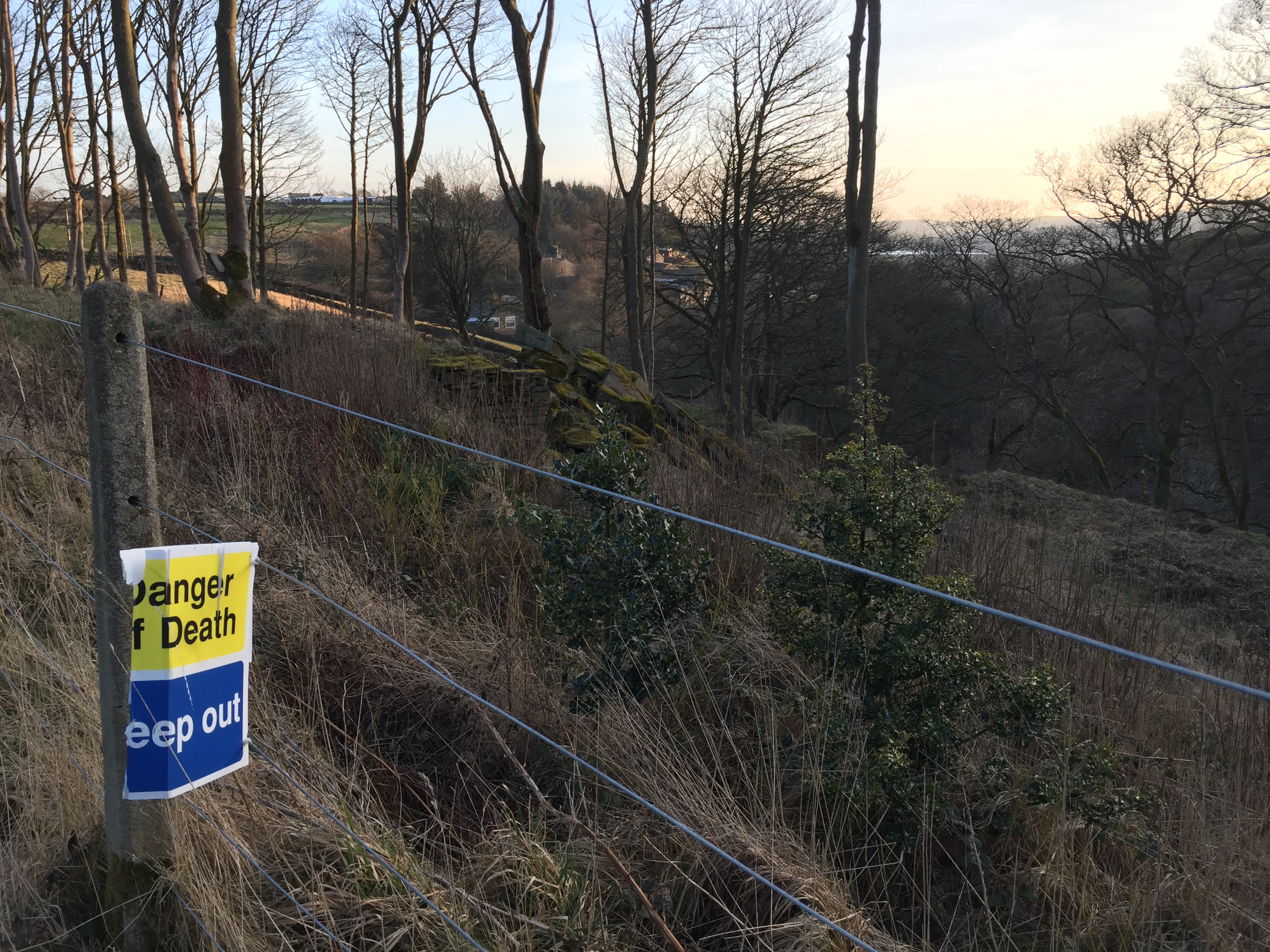 Guess I won’t try that path!

Back in Halifax – Anyone for a beer?

Walking back home from Greenwood Lee