The market comes to town every Thursday and I buy my fruit, veggies, cheese and fish there – not to mention a bacon butty for lunch which can be eaten on The Square, weather permitting! Unlike the Farmers’ markets in the U.S this produce doesn’t cost me an arm and a leg. Total for this little lot was £8. The box of tomatoes was £1. 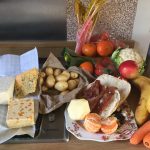 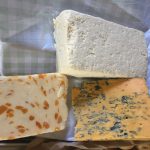 The weather forecast was predicting icy weather for the next few day – and for the whole of March! Knowing that I should take advantage of today’s sunny sky I decided after lunch – bacon butty, apple and satsuma – to take the bus up to Old Town and find a hike along the upper ridge and dropping down into Mytholmroyd. There were several people waiting at the bus stop. Ten minutes after the bus was due a man and his son left saying ‘We’ll go to the library instead.’ Another man, obviously quite disgruntled commented ‘I feel like getting a taxi and send ‘t bus company th’ bloody bill. Bloody bus ‘as brok’n doon agin.’ A couple of minutes later, before I could check the time of the next ‘bloody bus’ a taxi stopped to pick up three of the waiting passengers. “Hold on,” I called, “Can I come too?” So off we all went up t’th’ tops. I paid £1 to the driver and got out just by Hebden Bridge golf course, picking up the upper road where I had left it on Monday. This time I had an ordinance survey map with me so that I could pick out features in the landscape.

Looking across to Stoodley Pike

Not sure I’d want this as the name of my house! But what I learned from the Antiquarian lecture on Monday is that this indicates where a family built a dwelling for a son. So the initial family would live in Rough Farm and when the son came of age a dwelling would be built for him to weave and farm, and the family farm’s name  would change to Rough Top, and the son’s would be called Rough Bottom. (Same goes for Slack Top and Slack Bottom just above Heptonstall. There’s also Dog Bottom!

At some point I knew that I had to head down into the valley. Ah, I see a Public Footpath sign. Perhaps I should take that track. but what’s that I see lying in the grass?

OK, there’s no way in hell I’m going to walk through their field!

Eventually I found another path that took me to the Grove Inn on Burnley Road. Perhaps i can have a sit down and get a drink there.

Hmm – no house, free or otherwise, no B and B and certainly no food on offer.

So I joined the towpath in Brearley, having decided to continue walking all the way back to my apartment. A little farther along I saw a building I’d not noticed before: The Kitchen, adjacent to the towpath. It was advertising coffee to take away. That’s a nice idea, I thought. I’ll be very American and walk back into Hebden sipping at my coffee. People don’t do that in England very much at all. Tea or coffee is a ritual here that requires sitting down for a considerable length of time, and either musing quietly to oneself or talking animatedly depending on the company you are in. But once inside the place looked so attractive I decided to take my coffee in. Note to self: they do curries too, so I could walk along the canal from my apartment (about 2 miles) and get a curry and stroll back into town.

Wonder if my daughters would feel at home there? 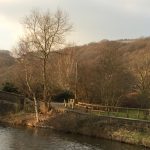 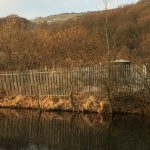 Late afternoon sunshine. Looking to see where I’ve walked from – the top of the farthest hill.

I always say hello to these ducks. They live at a house next to the canal and someone told me that the house used to keep chickens in a hen house. During the 2015 flood they all drowned, so now they keep ducks instead.

Thursday evenings are band night. I joined the Halifax Concert Band and next weekend we are spending Thursday and Friday evening and all day Saturday recording a CD. Here’s an extract from our rehearsal last night. The balance is all wrong because I was recording it in my coat pocket!

Walking back home from Greenwood Lee